VAL: A Personal Portrait Of Val Kilmer That He Helped Make 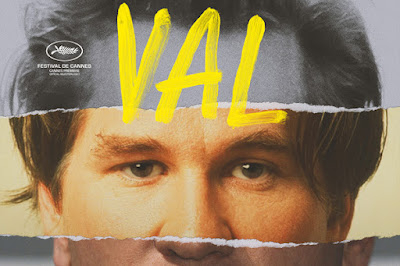 Since I first saw Val Kilmer as an ‘50s Elvis-eque pop star charm his way through the zany comedy TOP SECRET back in 1984, I’ve liked the guy. He was matinee idol pretty, but he was a talented presence in film after film. Cut to now, and Kilmer has lost his voice due to throat cancer and speaks in a twisted rasp through a voice box.
This is sad, but in the new documentary, VAL, the actor appears to be making the most of it. First-time directors Leo Scott and Ting Pooh have fashioned a biodoc that has the edge on many artist’s portraits as since the ‘80s, Kilmer has constantly been recording his life with a home movie video camera.

Whether he was capturing backstage Broadway shenanigans with fellow thespians Kevin Bacon and Sean Penn (who pushed Kilmer out of a leading role), hanging on film sets with co-stars, and playing with his kids - Jack and Mercedes, the products of his marriage to actress Joanne Whalley – Kilmer’s scores of footage makes his memories come alive.

The rest of the narrative concerns Kilmer’s current condition as he travels around with Jack as they go to events like Comicon, and visit his old drama school, Julliard in New York.

Because of Kilmer’s vocal ailment, his son, the 26-year old Jack narrates the film, reading his father’s words. Since Jack’s voice is stunningly similar to his Dad’s, the effect is so successful that at times I forgot it wasn’t his Dad speaking.

Kilmer takes us through his filmography, albeit only briefly touching on each movie. He calls TOP SECRET “fluff,” TOP GUN “silly,” and WILLOW is seemingly only significant because he hooked up with Whalley, who he’d soon marry (come to think of it, that is more significant than the movie).

THE DOORS gets more coverage perhaps because it contains one of Kilmer’s most immersive performances as the Doors’ Jim Morrison. Oliver Stone’s 1991 epic rock biopic is too over-the-top for it to make a real connection, but Kilmer’s take on the Lizard King is a true tour de force.

The ‘90s brought the anquished actor meatier roles in such modern classics as TOMBSTONE, in which he stole the movie as Doc Holliday; and HEAT, yet his one-time turn as Bruce Wayne/Batman in BATMAN FOREVER was far from a classic. But as Kilmer said, “You don’t turn down Batman, you don’t.”

Another notable bit is about making John Frankenheimer’s THE ISLAND OF DOCTOR MOREAU (1996), principally because it stared a bloated, uninterested Marlon Brando, who Kilmer long wanted to work with. We see how the doomed production left little time for Brando and Kilmer to have much of a meaningful collaboration, but there is a moment in which Kilmer pushes Brando back and forth on a hammock. 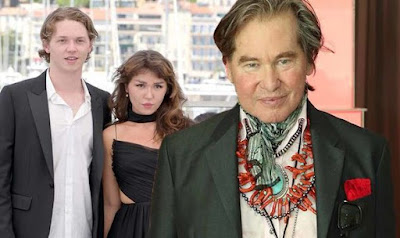 In one of the movie’s most emotional moments, Kilmer laments being on the autograph junket: “I’m selling basically my old self, my old career. For many people, it’s like the lowest thing you can do is talk about your old pictures, and sell photographs of when you were Batman or The Terminator…” Note: He has never played The Terminator; he was just generalizing I think.

I was skeptical about Kilmer playing Mark Twain in a one man play that was filmed and released as the movie, CITIZEN TWAIN, because Hal Holbrook owned the role for 60 or so years. But seeing clips of Kilmer’s version left me intrigued, and I may seek it out.

VAL is a terrifically touching look at a unique, and intense method actor maneuvering though a career that’s more commercial than he’s comfortable with. Now he’s struggling the side effects from throat cancer, and may be unable to return to acting again. I may have just spoken too soon, as I hear he's gonna to reprise his iconic role as Iceman in the TOP GUN sequel this fall. That's great because In these times of crazy confusion, damned diversity, and lack of artistic aventure, we need Val Kilmer more than ever.