Bob Odenkirk Is Pretty Freakin' Far From A NOBODY 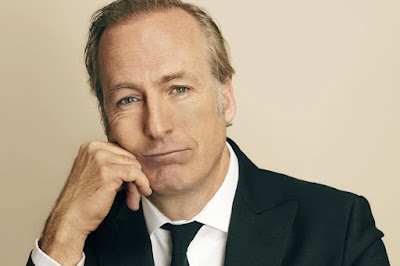 Last week, news made the rounds that Bob Odenkirk had collapsed on the set of Better Call Saul, the Breaking Bad spin-off that’s in production for its sixth and final season. A day later, while the actor/writer/director was ruled as being in stable condition at a hospital in New Mexico, the internet swarmed with well wishes from fans, friends, and co-workers. This touched and surprised me as I would’ve thought that most people wouldn’t know who he is.

Turns out that that was really short-sighted of me. I should thought of the popularity of his Breaking Bad/Better Call Saul character, slimy lawyer Saul Goodman (aka Jimmy McGill aka Slipping Jimmy), or the following of his HBO program with his comic collaborator David Cross, Mr. Show, or the fact that his most recent movie, the action thriller NOBODY, was number one at the box office this summer.

Despite that rebranding of Odenkirk as an action star, he’ll always be a comic genius to me. Although he only appeared as an extra in a handful of sketches, his impact as a writer on Saturday Night Live from 1988-94 was undoubtedly his comedy breakthrough. Working with such names as Conan O’Brien, Robert Smigel, and Judd Apatow, Odenkirk had a hand in creating such crowd pleasers as “Matt Foley: Motivational Speaker,” a sweaty showcase for Chris Farley, “The Five Timer’s Club” (a premise that still pops up on the show), and, most importantly, the “Get a Life” sketch, a Star Trek convention satire in which guest host William Shatner tells a roomful of Trekkies to “move out of your parent’s basements, and get your own apartments and grow the Hell up?” 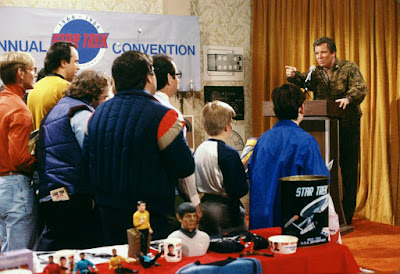 It’s one of the funniest SNL sketches ever, and it inspired the Chris Elliot sitcom Get a Life, for which Odenkirk was Executive Story Editor, Shatner’s 1999 book of the same name, and a likewise titled 2012 documentary about Trekdom hosted by Shatner.

Odenkirk’s comedy credits in the ‘90s are numerous with the most crucial being his work on The Ben Stiller Show, The Dana Carvey Show, and Late Night with Conan O’Brien. But another breakthrough came in 1995 when he and Cross hosted duo the sometimes mind-blowingly brilliant, sometimes gloriously stupid HBO sketch showcase, Mr. Show with Bob and David. For four seasons, the zany Cross and the shouty Odenkirk wrung many laughs out of Pythonesque premises and silly segues while supporting cast members including Sarah Silverman, Brian Posehn, Mary Lynn Rajskub, Scott Aukerman, Paul F. Thompkins, and the acoustic metal duo Tenacious D (Jack Black, and Kyle Gass) all staked out their future careers. After Mr. Show finished its original run, Cross and Odenkirk expanded one of their most popular characters into a movie entitled RUN RONNIE RUN in 2002. Unfortunately the project fell short for which Odenkirk blamed the director, Troy Miller. The largely unfunny film didn’t even get a chance at the big screen, and was released straight to video, but that may have been for the best.
Afterwards, Odenkirk toiled in the comedy trenches as a consultant on Tim and Eric Awesome Show, a writer on Derek and Simon: The Show, The Birthday Boys, and Tom Goes to the Mayor (I haven’t heard of those last two either). Alongside those gigs, were appearances as an actor in such better known shows as Roseanne, Seinfeld, Newsradio, The Larry Sanders Show, 3rd Rock from the Sun, Futurama, Just Shoot Me, Curb Your Enthusiasm, Arrested Development, Entourage, How I Met Your Mother, and, uh, let’s just say every single comedy program from the ‘90s to now. I won’t go into his just as extensive filmwork except to say that of the three films he directed, 2003’s MELVIN GOES TO DINNER is highly recommended (the others – LET’S GO TO PRISON, and THE BROTHERS SOLOMAN – not so much).

The real sea change came in 2009, when Odenkirk joined the cast of Breaking Bad in the show’s second season. The aforementioned Saul Goodman (“s’all good, man.”) was originally intended to only be in three episodes, but the man hit the performance out of the park so he became a series regular. Goodman’s slick diction, and loud, garish suits helped make the character a fan favorite, and paved the way for his own show, which began airing two years after Breaking Bad’s final episode.

For fans, Better Call Saul was a pleasurable extension of the previous program. I actually prefer it to Breaking Bad, and I am a big fan of that show. One strong addition to the world created by Vince Gilligan is Michael McKean as Chuck McGill, the protagonist’s disapproving brother. I was surprised and disappointed that McKean didn’t get an Emmy nod for his intense portrayal of a disturbed yet gifted attorney. 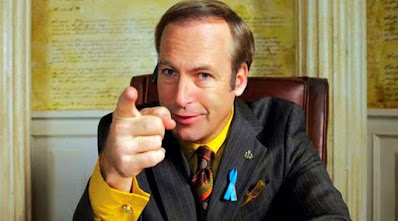 Alongside Better Call Saul, Odenkirk re-united with Cross for a brief run of a Mr. Show sequel of sorts on Netflix. Entitled W/Bob & David, the project featured material that was equal in hilarity to the original, so it felt like a tease that it was only a four episode revival.
So this all brings us to Odenkirk’s most uncharacteristic role to date, Ilya Naishuller’s surprise hit NOBODY. In this movie which has brought about comparisons to the JOHN WICK series, Odenkirk plays Hutch Mansell, a normal, boring guy, with a wife, and kids living in a house in the suburbs outside some unidentified city. After a home invasion, the largely humorless Hutch sets out on a vengeful journey in which he leaves piles of bloody bodies, and retrieves his daughter’s kitty cat bracelet. We also learn that Hutch used to be a CIA trained assassin, which anybody can see coming as it’s a dark thriller trope that goes way back. 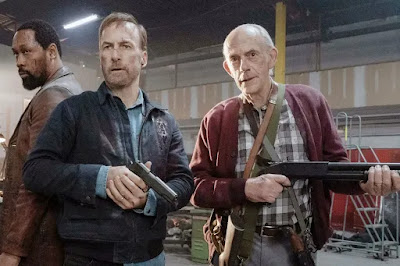 The role of Hutch’s Dad gives Christopher Lloyd an amusing chance to get in on the action-packed spectacle, and the film has a fine villain in Aleksei Serebryakov as a snarling Russian mob boss (again a well worn trope). But I got bogged down in all the machine gun fire, and scores of implausibly swift kills that led up to the typical shoot-out finale that’s set in a warehouse (tropey-trope).
Despite my fault-finding, I did enjoy a fair amount of NOBODY, of course, because of Odenkirk. For a guy who began his career as a comedy writer, it’s eye-opening to see him do things we’ve never seen before. An amped up fight scene aboard a parked bus at night is arguably the movie’s peak. 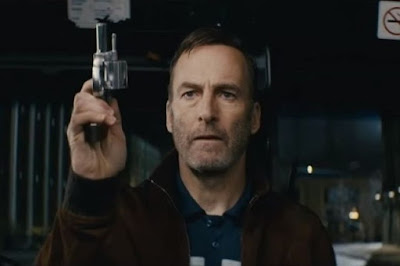 Sure we’ve all seen scenes in which an indestructible badass takes down a gang of attackers, and this doesn’t re-invent the wheel, but it’s a pretty thrilling series of bodily injuries in blindingly quick succession brought on by the least likely edgy vigilante. Odenkirk trained extensively for this movie and it really shows.

It’s great to hear that Odenkirk is on the mend. The online outpouring probably was the result of the list on Twitter of who or what’s trending. Seeing Odenkirk’s name made a lot of folks think the man had passed, and when they found out he was still among the living, they realized how much he meant to them. At least that’s what happened with me.

A couple of days ago, Odenkirk tweeted this:

A very sweet message from a guy whose contributions to the world of comedy are immeasurable. I’m looking forward to seeing him branch out into other genres, but for now, Bob, get plenty of rest, and take your time to recover. Well, maybe not too much time - I’m dying to see Better Call Saul Season 6.
More later...
Copyright 2004-2018 Daniel Cook Johnson at 10:12 AM