Soundtrack Of The Week: THE BUDDY HOLLY STORY 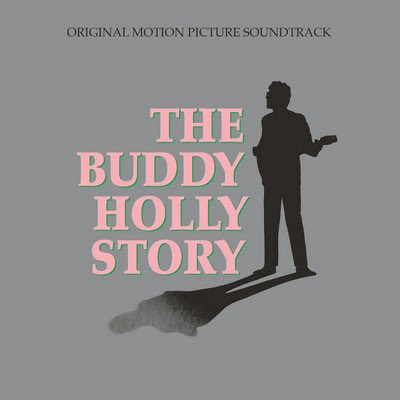 I’ve long been amused by this record. Obviously it’s the soundtrack for the 1978 rock biopic, THE BUDDY HOLLY STORY, but what I find funny is that it completely consists of the film’s star, Gary Busey taking the vocal duties on for a platter of Buddy Holly classics. Around a dozen of ‘em. Sung by Busey. You read me right.

Now it’s not like this is that rare. Many actors and actresses have done their own singing in biopics. Sissy Spacek performs as Loretta Lynn on the COAL MINER’S DAUGHTER soundtrack, and Reese Witherspoon and Joaquin Phoenix do the same as June and Johnny Cash for WALK THE LINE.

It’s reported that Val Kilmer did many of Jim Morrison’s vocals in THE DOORS, but I’m not so sure. I’ve heard that his and the lizard king’s voices were mixed together at times, but the bulk of the songs used in the movie are the originals. This is confirmed by the credits for the soundtrack, which has no mention of Kilmer. It’s similar to GET ON UP, in which Chadwick Boseman contributed some singing, but probably realized early on that there’s no way he could top the Godfather of Soul.

Anyway back to the Buse! I haven’t seen Steve Rash’s THE BUDDY HOLLY STORY in a long time, but remember it pretty well. The longer ago it gets, the casting of Busey as Holly grows weirder and weirder in my psyche. He was 34 when he got the part – the lanky Holly was 22 when he died – and he had a much larger frame, so this looked like it would be the miscasting spectacular of the decade! 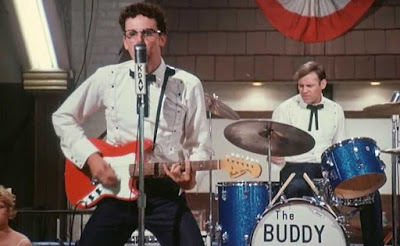 But Busey, against all odds, pulled it off. It helps that he’s younger, and less edgier, and not the abrasive assholish lunatic that we all know and love now. The film itself has all kinds of issues, especially with all of its inaccuracies, but Busey makes it feel like like it’s a notch above the typical TV biopic. Or half a notch because it’s still is in made-for-TV terrain. Busey even got an Oscar nomination (he lost to Jon Voight for COMING HOME), and much critical acclaim, but record reviewers largely ignored the soundtrack, and it didn’t get much chart action either.

I can totally understand that. I mean, if you want to purchase a Holly album why go for an album in which Busey takes the lead? It’s like wanting to buy a Beatles record, and picking up Beatlemania: The Album, in which clones play the music of the Fab Four note by f-in’ note on Broadway.

Most of the album was recorded live, with a loud audience, sounding like they cut a number of tracks between shots during the roller rink scenes, and the Apollo gig. Busey sings a song, “I’m Gonna Love You Too,” in acappella, and it’s actually not embarrassing.

The band admirably churns through a medley of Holly’s hits such as ”That’ll Be The Day”/ ”Oh Boy!”/ “Peggy Sue” / “Maybe Baby” and you can feel the fun in the air. Though I must say that its sounds better if you’re in another room from the stereo. Otherwise my mind keeps picking apart which nuances work and which ones fall flat.

Just last year, a Deluxe Edition of THE BUDDY HOLLY STORY Original Motion Picture Soundtrack was released that featured 10 bonus tracks. That brings the tally of Busey does Holly tunes up to 22. Maybe by the next re-issue, they’ll have amassed enough of Busey’s material to equal Holly’s entire oeuvre.

I’ll leave you now with this clip of the fake Buddy Holly and the Crickets playing the Apollo (they were the first white act to play at the iconic venue btw):