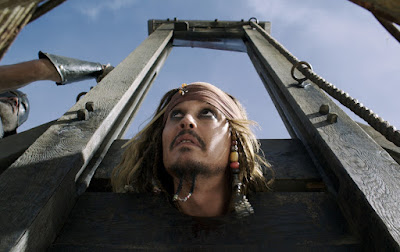 After a string of major misfires, including ALICE THROUGH THE LOOKING GLASS, THE LONE RANGER, MORTDECAI (forgot about that one!), TRANSCENDENCE, and DARK SHADOWS, Johnny Depp once again dusts off his Keith Richards impression, dons an X-marked pirate hat, do-rag, black eye makeup, earrings, and the rest of his familiar ratty attire (not dissimilar to what Depp wears in real life) to resurrect the character of Jack Sparrow for the fifth film of Disney’s highly lucrative PIRATES OF THE CARIBBEAN franchise.

As his last big hit was the last PIRATES movie, ON STRANGER TIDES, this makes financial sense for the actor, but for folks (like me) who are tired of the increasingly redundant series, it’s not a very appealing prospect.

But, hey, I try to give every movie the benefit of the doubt - even when it comes to the slew of seemingly unnecessary sequels that clog up the multiplexes every summer. So I’ll say this - DEAD MEN TELL NO TALES is better than the previous PIRATES entry, Rob Marshall’s ON STRANGER TIDES (2011), but, and I know you can see this coming, that’s really not saying much.

This time around, the premise concerns Brenton Thwaites as the son of Orlando Bloom and Keira Knightly’s characters from the first several movies, who seeks out Depp’s Sparrow to help him find the film’s McGuffin - a magical compass thingie called the Trident of Poseidon - so that he can free his father from a curse keeping him forever undersea aboard his sunken ship.

Also wanting to find Sparrow and break their curse, is a group of undead sailors led by the sinister Captain Salazar (Javier Bardem, who's a little scary at first but that dies off rapidly), who were trapped in the Devil’s Triangle by Sparrow (in a flashback where we see a young Depp courtesy of digital trickery). Oh yeah, there’s also actually a female lead along for the ride played by Kaya Scodelario, whose character Carina Smyth is an astronomer, which makes people think she’s a witch.

Add Geoffrey Rush reprising his role as Captain Hector Barbossa for the fifth time to the mix, and we’re off into another amped up series of over-the-top sequences in which our heroes seamlessly dodge digital dangers in battles at sea and on land with all of them blending together into a tedious run through done-to-death plot mechanics.

Even bits that I enjoyed such as an action set piece involving a botched bank robbery in which the actual bank building is pulled around a village by a team of horses, felt like a variation on any number of comical chases in the previous entries, and Depp’s swishy Sparrow schtick, which was past its sell-by date a few films ago is just another predictable, uninspired element on display here.

On the plus side, the visual imagery, aided by tons of CGI, is stunning with oceans that glitter to the horizon dominated by intricately detailed battle ships and cool looking ghost sharks (that’s right). It proves that these days even mediocre movies can look immaculate.

Despite this appraisal, I wouldn’t recommend seeing it in IMAX 3D like I did - the effect wears off pretty quickly.

I predict that PIRATES fans will be pleased by this entry - I say that because my wife likes them and she liked this one - but while I thought there was a reasonable amount of fun onscreen for at least a matinee price, I grow tired at seeing this series endlessly repeat itself.

This film seems to have two major purposes as a piece of pop culture - keep the franchise afloat for more follow-ups, and end Depp’s career slump. As its biggest competition this Memorial Day weekend is BAYWATCH, I’m betting it will have no trouble reaching those goals.

For those who are curious - yes, there is an after credits stinger to set up a yet another sequel. Like every single thing else here, that’s a given.