GUARDIANS OF THE GALAXY VOL. 2: Overstuffed But Still A Fun Ride

GUARDIANS OF THE GALAXY VOL. 2 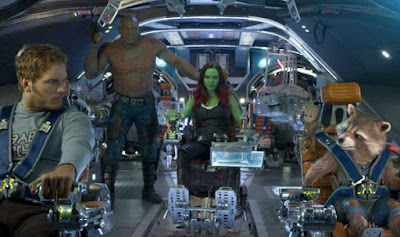 With the summer movie season upon us, it’s easy to be cynical about big ass, CGI-saturated superhero movies clogging up the multiplexes, but the Marvel machine has a pretty good track record. A couple of times a year, sometimes three, that ginormous franchise factory consistently cranks out comic book adaptations that are mostly quality entertainment.

So that brings us to the second installment to one of the funniest, most offbeat entries in the MCU (Marvel Cinematic Universe), GUARDIANS OF THE GALAXY.

VOL. 2 re-unites Chris Pratt as Peter Quill aka Star-Lord, Zoe Saldana as the green-skinned Gamora, Dave Bautista as the multicolored Drax the Destroyer, and the voices of Bradley Cooper and Vin Diesel as the CGI-ed characters Rocket the raccoon, and the tiny tree-like Baby Groot.

The film starts by introducing us to Quill’s dad, played by a young Kurt Russell. That’s right, in a scene set in 1980, Russell via camera effects and make-up appears as his 30-year old self, and it’s pretty damn convincing. Russell’s Ego (yes, that’s his name) takes his girlfriend (Laura Haddock), obviously later to be Star-Lord’s mother, to see some sort of alien seedling deal he planted in the woods behind a Dairy Queen somewhere in Missouri.

Flash forward 34 years and we meet up with the Guardians of the Galaxy as they battle a huge inter-dimensional creature with tons of tentacles, and teeth on a platform somewhere in space (they probably had a caption saying where but I don’t remember it). The action takes place largely in the background as the film focuses on Baby Groot cutely dancing up a storm to ELO’s “Mr. Blue Sky” in the foreground.

The gang’s job is to protect some powerful batteries, the movie’s McGuffin, for some gold-skinned people called the Sovereign led by Elizabeth Debicki as the High Priestess. This is in exchange for Gamora’s evil sister Nebula (Karen Gillan) so that the Guardians can take her to Xandar to collect her bounty. But then Rocket steals some of the batteries and a chase ensues with a bunch of remotely controlled drones following our heroes into an asteroid field (it’s not the only time this film apes THE EMPIRE STRIKES BACK, believe me).

Their ship crash lands on some planet (again, I don’t remember the name if there was one), and soon after another vessel that they had seen during the chase sequence lands. Russell, now identified as Ego, appears to reveal himself as Quill’s father, and asks him to come with him to his planet. Rocket and Groot get captured by Michael Rooker, reprising his role as the blue-skinned Yondu Udonta and his team of Ravagers, but a mutiny gets Yondu imprisoned with Rocket. This leads to another scene, one of the film’s funniest, in which Baby Groot keeps bringing the wrong thing instead of Yondu’s red fin head thingie, which can shoot a laser-like arrow through hundreds of attacking Ravagers.

Meanwhile, Quill is bonding with his dad, Ego (they even play catch together with some kind of light orb), but Gamora isn’t so sure that Ego is to be trusted. He’s not, of course, and his sinister plan, that he calls “The Expansion” involves taking over the galaxy with the seedlings planted on every planet. Ego, a character that dates back to 1966, himself is a living planet, you see.

The freshness of the first has evaporated, but VOL. 2 is a fine follow-up overall, but it’s a bit overlong and overstuffed with way too much going on - I had trouble following some of the chaotic goings on. Also my wife said she thought the father-son emotional content was heavy handed, and I have to agree. I would’ve liked more misdirection surrounding whether Ego is the film’s villain or not as well, but I guess fans of the comic would know that going in.

A new addition to the Guardians is Mantis played by an attenna-sporting Pom Klementieff, who has some funny moments with Bautista’s Drax, who keeps reminding her how hideous he thinks she is.

It was surprising to see Sylvester Stallone in such a small role - that’s right, this movie has both TANGO & CASH – as a high ranking Ravager named Starhawk (Stakar of the House of Ogord), another character that’s been around for decades but I’m just learning about now.

Russell over-acts a bit, but Ego's persona does call for it. The rest of the Pratt-led cast carries out their duties with humorous aplomb, and, like I said on the first one, Rocket may be Cooper’s best work.

GUARDIANS OF THE GALAXY VOL.2 is action and comedy packed enough to be the crowd pleaser its director/screenwriter Gunn wants it to be, and the soundtrack - the Awesome Mix Vol. 2 that Pratt’s Quill got at the end of the first one - lives up to its name with a bunch of toe-tapping tunes by the likes of George Harrison, Cheap Trick, Sweet, Jay and the Americans, and Cat Stevens (“Father and Son,” of course). I also enjoyed the David Hasselhoff jokes and cameo – he’s Quill’s father figure idol, you see).

The film’s bloat extends to five, count ‘em, five post credits scenes, so don’t get up when the movie looks like it’s over. I hate seeing those movie-goers that start to walk out and then have to race back or stop in their tracks to watch the stingers. Jeez, everyone should know by now that at a Marvel movie they should stay in their seats until the real finish and the actual studio logo hits the screen. It’s as expected as the obligatory Stan Lee cameo! We’re 15 movies into the MCU, people - get it together!

Very good review for an excellent movie. I do agree with some of your more critical points, but overall this one of my favorites in a long time...