SILENCE Tests My Faith In Scorsese 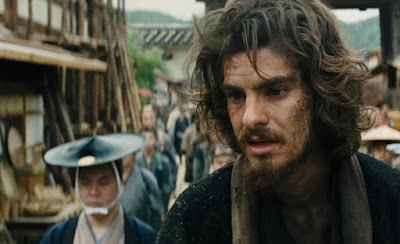 It is well documented that, in his childhood, Martin Scorsese attended a Roman Catholic seminary, and dreamed of being a priest.

Of course, he later chose making movies over practicing religion, but that didn’t mean that he ever abandoned his spiritual faith.

Religious themes and imagery appear in all of Scorsese’s films whether they’re in your face like Christ himself on the cross in his controversial adaptation of Nikos Kazantzakis’ equally controversial novel, THE LAST TEMPTATION OF CHRIST, or subtly, like the tiny cross around Henry Hill’s neck in his adaptation of Nicholas Pileggi’s “Wiseguys,” GOODFELLAS.

But in this, his adaptation of a book he read between making LAST TEMPTATION and GOODFELLAS, Shūsaku Endō’s 1966 novel “Silence,” Scorsese dives deeper into the questions that have plagued him his entire career: how far can or should one go to save his and/or others’ souls? How can we serve a God that allows such extreme suffering? What if we are praying to nothing at all?

Set in the early 17th century, SILENCE concerns Adam Driver and Andrew Garfield as two Jesuit priests, named Sebastião Rodrigues and Francisco Garupe, who travel to Japan to find a former mentor of theirs, Cristóvão Ferreira (Liam Neeson), after hearing that he renounced his religion to escape persecution.

This is during what was called the “shogun era” of Japan, in which Christianity was outlawed, and those captured practicing it were interrogated, tortured, and killed.

With the questionable help of an alcoholic guide named Kichijiro (Yosuke Kubozuka), Sebastião and Francisco sail to the coastal town of Tomogi where they administer to the villagers.

The priests stay in hiding, nightly meeting with the Kakure Kirishitan (“hidden Christians”), but they are found out and after having to endure witnessing some intense torture scenes that I’ll refrain from describing, they separate and the film follows Garfield’s Francisco while Driver’s Sebastião disappears for a large chunk of screen-time.

Francisco gets captured by Japanese authorities and is taken to Nagasaki to be interrogated by Inquisitor Inoue (Issei Ogata), an elder, sinisterly smirking Japanese official, via Inoue’s sleazily charismatic interpreter (Tadanobu Asano).

In captivity, Francisco is given a choice: either step on “fumi-e,” a plate that has an image of Christ or the Virgin Mary carved into it, to repudiate his faith, or they will torture and kill the other captives.

Neeson’s Ferreira, looking like a shamed version of the Jedi master he played in THE PHANTOM MENACE, even shows up to help Francisco make this difficult decision.

You’ll feel like you’re really out in the harsh, grayish green mountain terrain of Japan, waiting for something, anything, to happen through long passages of this often plodding narrative.

The hardcore Scorsese fan in me was scanning the screen with excitement during the first 20 minutes, but that lost momentum as the film did the same for roughly the next 40, then that fading enthusiasm got regularly jolted back into temporary immersion by various violent moments up until the end.

Garfield, who as he gets shaggier on his journey looks more and more like Jesus as the film progresses, puts in an invested performance, as do his cast-mates (Driver does a lot with a little), but it might be Kubozuka as the desperately conniving Kichijiro that gives the film the most energy.

This last year, Garfield also played another devout Christian in a historical drama whose belief system gets put to the test under extreme circumstances. That would be HACKSAW RIDGE, where he portrayed conscientious objector Desmond Doss, who saved many lives in World War II. I hate to say this, but HACKSAW RIDGE is a better, much more compelling film about conviction and sacrifice than SILENCE.

Obviously, I hate to say that because HACKSAW RIDGE was made by Mel Gibson, and this is, you know, f-in’ Scorsese!

Since this was a 30 year in the making passion project, I so wanted to love it, but there was a serious disconnect between the action and imagery on screen, which admirably is as straight forward as can be, without visual trickery or flashing editing; and my fully surrendering myself to the experience. That’s something I’ve been able to do with so many of Marty’s movies throughout my movie-loving life, but it just wasn’t happening here.

Then again, I’m still processing it so maybe one day I’ll see it differently. There have been a number of Scorsese films that get better with repeated viewings (like CAPE FEAR, BRINGING OUT THE DEAD), and those that I appreciate more (NEW YORK, NEW YORK, KUNDUN), as I get older, and wiser and all that crap.

But, you see, the reason I’m saying these kind of things, that is, making excuses for not liking a movie by one of my heroes, is because I’m a devout follower, who wants to believe that all of the man’s works are masterpieces – some blinding, some in hiding.

SILENCE is as much a test of Francisco’s faith as it is a test in my faith in Scorsese. I so want to believe his latest film is a masterpiece in hiding, and not the seemingly passionless project I suffered through, but I just can’t put that in a prayer yet.