HAIL, CAESAR!: Not Top Tier Coen Brothers, But At Times It Comes Close

Opening today at both multiplexes and art houses (but mainly multiplexes): 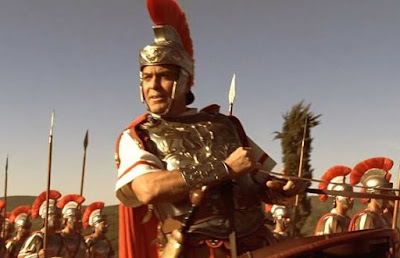 “This motion picture contains no visual depiction of the godhead.” – End Credits Disclaimer

After the bleak, gray-toned terrain of their last few pictures, 2010’s TRUE GRIT and 2013’s INSIDE LLEWYN DAVIS, the Coen brothers mix it up with this colorful, star-studded satire of ‘50s Hollywood.

In his third film for the master filmmaking siblings, Josh Brolin heads the cast as Eddie Mannix, the head production chief for the fictional Capital Studios, who mainly works as a “fixer” (somebody who keeps actors’ scandals out of the press). We first meet Mannix in a confessional, where the man cries over the sin of sneaking cigarettes and lying to his wife (Alison Pill) about it.

From there, we learn about the troubled production of a big expensive Roman-Biblical epic (a film-within-the-film also titled “Hail, Caesar”), which stars Baird Whitlock, an idiot of a matinee idol played by another Coen bros. veteran, George Clooney. On the set, Clooney gets drugged by a couple of extras (Wayne Knight and Jeff Lewis), and gets taken to a Malibu beach mansion where he is held for ransom by an organization of communist screenwriters who call themselves “The Future.” That’s right, it’s another Coen brothers’ kidnap caper!

Intertwined are the tales of a few of Mannix’s other clients: Hobie Doyle (stand-out newcomer Alden Ehrenreich), a B-movie cowboy star actor who, while working on a western, is told that the studio wants to change his image, and DeeAnna Moran (Scarlett Johansson in her second Coen brothers film after THE MAN WHO WASN'T THERE), obviously modeled on MGM’s swimming superstar Esther Williams, whose pregnancy threatens to ruin another production (another film-within-the-film). Johansson, who speaks in a New Yawk accent that will be familiar to SNL fans, has a juicy albeit brief part, involving an even briefer Jonah Hill cameo.

Then there’s Tilda Swinton, also making her second appearance in the Coen canon, hamming it up in a dual role as Thora and Thessaly Thacker, twin sister gossip columnists who confront Mannix (separately, but one right after the other) for a scoop every time he leaves his office.

In a extremely well choreographed production number from yet another film-within-this-film, Coen brothers first-timer Channing Tatum steals the movie in a sailor suit in a helplessly homoerotic song and dance routine to a tune called “No Dames.” Tatum, and his fellow seamen, athletically tap dance up a storm around a saloon set on top of the bar, stools, and tables, while Tatum puts in some surprisingly smooth singing on top of it. It’s a smile-inducing highlight.

The more I think about it, the more I like HAIL, CAESAR! It’s not top tier Coen brothers, but at times it comes awfully close. Such times include an early scene in which Brolin’s Mannix assembles a group of religious leaders from different faiths to make sure that the “theological elements are up to snuff” in “Hail, Caesar!,” which humorously recalls the spirituality spoofing of A SERIOUS MAN.

The sitting room scenes involving “The Future,” with its wonderfully cast members including Max Baker, David Krumholtz, Patrick Fischler, Fisher Stevens, and Fred Melamed, who happened to be in A SERIOUS MAN, also share that period piece’s vibe, as well as more of a palpable sense of McCarthy-era paranoia than TRUMBO could muster.

Also up there, or at least one that I laughed out loud at, is a bit where Ralph Fiennes as a stuffy director (named Laurence Laurentz, because of course he is) of stuffy drawing room dramas is saddled with Ehrenreich’s Doyle and can’t get him to satisfactorily deliver one particular line (“Would that it were true” being the line that gets repeatedly massacred).

With its A-list ensemble running around in silly scenarios, I expected something more screwball, a lark a la BURN AFTER READING, but the lighter, restrained wackiness of HAIL, CAESAR masks layers of meaning underneath that I predict us critic folk will be trying to decipher for ages.

After saying that BURN was the last time he’d play an idiot for the Coens, I’m glad Clooney reconsidered and came back for what Joel Coen has jokingly referred to as “the fourth installment of the George Clooney numbskull trilogy.” 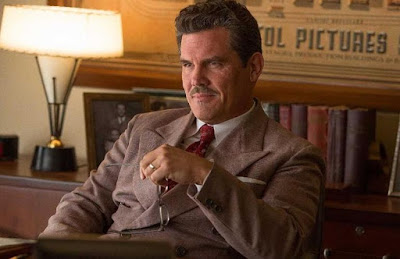 But as apt as Clooney is as a movie star dolt, it’s Brolin’s show, and it’s his best work for the Coen brothers - his jaded stoicism is the film’s rock. The character is the only one in the film that’s directly based on a real person of the same name (the real Eddie Mannix was a studio fixer for MGM), and Brolin puts in a weighty performance that would’ve fit right into serious-minded movies set in the same era like L.A. CONFIDENTIAL.

It doesn’t all flow seamlessly – there’s some HUDSUCKER PROXY-ish clunkiness, and some bits that flatline - but the film achieves BARTON FINK-style brilliancy more than a few times (it’s no coincidence that Capital Pictures is the studio in both films).

It’s too early to see how HAIL, CAESAR! ranks among the rest of the Coen brothers’ filmography, but I can already say that its miles above their lesser efforts (THE LADYKILLERS and INTOLERABLE CRUELTY).

The fun of its fake movie production numbers, its authentic Technicolor look (shot on film by longtime Coen brothers collaborator, cinematographer Roger Deakins), and, of course, its more than capable cast, make it a film that you don’t have to be a film buff to appreciate. But it sure does help.