The Recollections Of The Colony Theater Series Begins 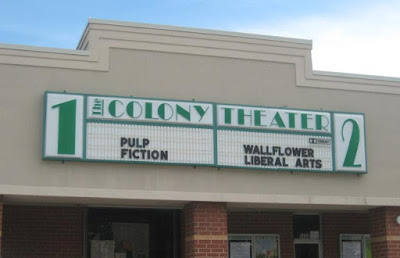 As The Colony Theater in Raleigh is going to close in December, I've been collecting stories from local folks about their memorable experiences there at the over 40-year old art house.

Our first recollection comes from Brian Hill, a Facebook friend who I've seen at many of the theater's revival screenings such as Cinema Overdrive. Brian writes that this is his favorite story of seeing a movie at The Colony:

“Back in 1994 while I was at NC State for college, my friend and I decided to go see PULP FICTION, which was only playing at the colony. I picked her up at her dorm and we rolled over to the theatre to check out the film. On the way there, I noticed that she was acting a little weird, but not completely out of the ordinary.

We had had a beer before leaving and she was a fairly small girl so I chalked it up to that. Upon arriving at the theatre, we hit the concessions and grab a big thing of popcorn which she immediately starts woofing down like is mana from heaven. Again, odd, but not overly odd. Getting into the theatre she notices the carpeted walls and becomes mildly entranced, to the point that she walked over and petted them for a minute or two before we finally took our seats in the front row (house was packed!) This was sorta weird but I just let it go because I didn't really know what to say about it. Finally the movie started and I figured everything was cool.

Cut to the scene of Travolta and Thurman pulling up in front of Jack Rabbit Slims. Mia looks at Vince and tells him to ‘not be a square daddy-o’ and draws the square in the air. This is depicted on screen with the dots drawing out the square. About a minute after that scene, I feel my friend’s hand roughly grab my arm and I look over and she is completely wide-eyed and looking mildly freaked out.

I leaned over and whispered at her to see if she was ok to which she replied, in a VERY nervous sounding tone: ‘Did you just see Uma Thurman draw a square?’ And I was, ‘yeah?’ She immediately whipped her head around and was like ‘You did????’ in a very happy/excited tone. After that, she sat back and watched the flick with no more issues and the night ended.

The next day I asked her what the deal was and she told me that before I had picked her up one of the people in her dorm had given her some mushrooms and she was tripping the whole time. And when she saw the lines on the screen she thought it was the trip and was about to freak the hell out. After she realized it was part of the movie she calmed down. To this day I think about that every time I go to the Colony (and every time I watch PULP FICTION).”

Editor’s notes: The picture at the top of the post isn't from when PULP FICTION originally played at The Colony in ‘94 - it’s from a more recent Cool Classics screening of the film a few years back. Also, it always bugged me that the square that Uma draws looks more like a rectangle.

Have a story about The Colony Theater to share? Please send them to: boopbloop7@gmail.com. And thanks to Zack Smith and the Indie for their shout-out in this post about the theater's closing.