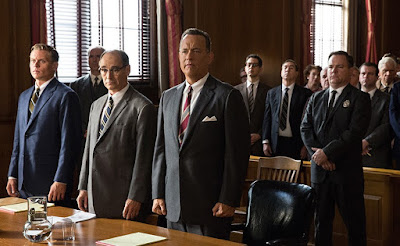 You know we’re really getting into the season of Oscar-baiting when a prestige picture with such pedigree as this one comes along. I mean, it’s a Steven Spielberg film, starring Tom Hanks, concerning historical events, with a screenplay co-written by the Coen brothers – can you get any more Oscar baity than that?

Set in 1957 at the height of the Cold War, the film posits Hanks as James Donovan, a Brooklyn-based insurance lawyer who was recruited by the CIA to his initial chagrin to defend an accused Soviet spy.

The assignment makes Hanks’ Donovan very unpopular with the public – he gets nasty looks from folks on the subway looking up from their newspapers – and draws ire from his wife, played by Amy Ryan, elevating the role of the typical concerned wife-on-the-side, who asks: “Do you know how people will look at us, the family of the man trying to free a traitor?” (sure, it’s an easy, obvious role for Ryan, but if you have to have that part played - who better?).

Donovan consults with his client, Rudolf Abel (played with nonchalance by Mark Rylance) and explains that if convicted he could be facing the death penalty. “You don’t seem alarmed,” Donovan observes to which Abel says “would it help?” This line becomes a running joke of sorts.

As expected, Donavan loses the case but argues that Abel should be kept alive in case the situation arises in which the Soviets have captured an American then a trade could possibly be arranged.

Meanwhile, we are introduced to a group of U.S. fighter pilots who are sent on a secret intelligence gathering mission involving the Airforce’s new fangled high altitude, camera-equipped U-2 spy planes. One of the pilots, Gary Powers (Austin Stowell) is shot down and captured by the Russians.

Representing the CIA, Donovan travels to East Berlin to negotiate the trade of Abel for Powers, and another American, a Yale student named Frederic L. Pryor (Will Rogers), who was arrested and is being held without charge by the East German police.

Maneuvering through the negotiation process between East Germany and the U.S.S.R. is tricky for Donovan as has to work out the conditions of the deal with such prickly bureaucrats as Wolfgang Vogel (Sebastian Koch), a German lawyer; and German Stasi agent Harald Ott (Burghart Klaußner).

Between meetings on the street of Berlin, Donovan is accosted by a group of young German toughs, who steal his overcoat. Afterwards, one of his colleagues asks “How did you lose your coat?” Hanks shrugs and replies: “You know, spy stuff.”

Spielberg and Hanks serve up splendid, you know, spy stuff here in this sturdy, grey-toned drama that beautifully builds to the tense prisoner exchange climax at Glienicke Bridge between East and West Berlin, where Powers’ fighter pilot friend Joe Murphy (Jesse Plemons) is brought over to confirm his identity.

This stand-out sequence is where Spielberg’s longtime cinematographer Janusz Kamiński captures the film’s most stunning imagery with the glare of lights on the snowbound bridge juxtaposed with the pitch black of the night effectively surrounding these little men just doing their jobs, as one character puts it.

The film’s post script shines with Spielberg’s brand of sentimentality which many may find to be cheesy – i.e. such shots as a woman on the subway looks up from her paper to give our modest hero Hanks a smile of approval in obvious contrast to that earlier aforementioned scene - but it felt earned to me.

Hanks and Spielberg are among the only ones these days who can really sell such a Capra-esque vision of an all-American family man – an honest lawyer, mind you – who works to do the right thing to make the world a better place. Donovan’s role in the trial and the trade deserves such a treatise, enhanced by the timely commentary on how the Cold War of yesteryear echoes through the War on Terror of today.

It’s also a pleasure to have Hanks handling the sharply scripted dialogue by Joel and Ethan Coen, who co-wrote with Mark Charman, that’s so much better than what the Coen brothers gave him in one their rare misfires, 2004’s THE LADYKILLERS. Still, Hanks, as solid and dependable as his performance is, will doubtfully get any Oscar action for this (the Academy has been there done that), but I’m betting that Rylance, who quietly steals the movie as the amusingly jaded Abel, will get a nomination.

BRIDGE OF SPIES may be another case of the “Greatest Generation” saluting itself again, but it’s grand, old fashioned entertainment made by one of our most trusted storytellers, and one of our most trusted actors that does stately justice to its subject. So go ahead and label it Oscar bait, but that doesn’t mean it isn’t worth swallowing hook, line, and sinker.

I really appreciated this post because I was planning on going to an AMC theater tonight to go see a film and was on the boarder whether to go see this film or another one. Thank you for making my mind up. I am definitely going to go buy tickets to go see this movie tonight!