Opening today at a multiplex near you: 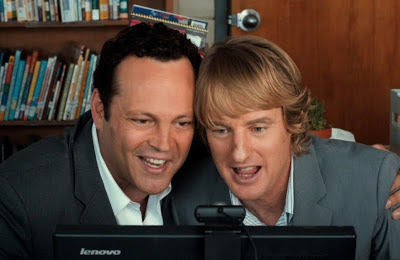 Using the tried and true tropes of the slobs versus snobs/underdogs become winners formula, Vince Vaughn and Owen Wilson take on the ginormous corporation that is Google in this slightly funny, but completely disposal comedy.

But they don’t really take on Google, so much as kiss its ass by portraying it as a tech world Mecca that those well below retirement age, such as with the 40-something Vaughn and Wilson out on their asses after their boss (John Goodman) closes their company, would dream of having as their workplace.

As the not-so-tech savvy yet slick talking salesmen who wormed their way into an internship with the search engine empire, Vaughn and Wilson are looking to re-ignite the comic spark that made their previous collaboration, 2005's WEDDING CRASHERS, a huge hit, but like a lighter that you keep flicking but can’t get a full flame going, this effort should be tossed into the waste bin.

That’s not to say there are some legitimate laughs here and there, Vaughn’s power-riffing and Wilson’s way with a one-liner made me chuckle every now and then, but it’s as if they reached the minimum quota of sure-fire funny and thought it would suffice.

The funny bits are all up front such as a Skype interview Vaughn and Wilson do from a library with The Office’s B.J. Novak, in which the duo dance around their disqualifications amusingly, and the film also shoots its wad early by placing its Will Ferrell cameo (as a sleazy mattress salesman that Wilson briefly works for) in the first 15 minutes.

Not much interesting happens in THE INTERNSHIP after the mild chuckling dies down.

Vaughn and Wilson get together with a scruffy group of outcasts including Josh Brener, Dylan O'Brien, Tiya Sircar, and Tobit Raphael to compete against several other teams for the coveted award of employment at Google, and the challenges they tackle (creating a new app, developing call service skills, marketing a pizza restaurant) are dull sitcom-ish scenerios.

Max Minghella (THE SOCIAL NETWORK) is the chief antagonist, as the leader of a rival group of interns that he verbally abuses, and The Daily Show’s Aasif Mandvi as a snooty internship program leader looks down on our supposed heroes, but is mainly there to be a straight man to Vaughn.

In the obligatory scene in which the group needs to loosen up so they hit a bar for some partying shenanigans, there’s a predictable run-in with a group of blonde frat types headed by Brian F. Durkin, who the Woody Allen-ish Brener zings by calling Biff Tannen (a BACK TO THE FUTURE reference – will the kids today get it?) while he's hitting on a stripper (Jessica Szohr).

It’s another instance where the film feels like just an amalgam of set-pieces from a bunch of ‘80s comedies, like STRIPES and BACK TO SCHOOL.

There is the difference that while Bill Murray in STRIPES (and all his roles of the period) had what A.V. Club writer Phil Dyess-Nugent recently called his “signature fake sincerity” going on, and Vaughn, despite his motor-mouth show-biz hipster speak, actually is sincere.

Murray would tell you that you’re the best, schmoozing you all up, but then he’d be out the door once you’re on his side (or not).

Vaughn, in this movie, when he wants Mandvi to like him and be his friend, he means it and he won’t take no for an answer. It’s endearing, but hardly a trait that elevates this lame enterprise.

Director Levy has made a career out of mediocre comedy fare like this (See: CHEAPER BY THE DOZEN, THE PINK PANTHER remake, the NIGHT AT THE MUSEUM movies, or, better yet, don’t see them), so this one’s suckiness is no surprise.

With its bright primary-colored atmosphere, free food (Vaughn takes ample advantage of this perk), and its unconventional work environment, Google does indeed look like a worker’s paradise. However, the half-assed conventions of this movie just reduce it to a stylish backdrop behind a couple of wiseacres trying in vain to get down with youth computer culture.

If you love these guys and have to see THE INTERNSHIP because you thought WEDDING CRASHERS was the greatest movie ever, at least opt for a matinee. This almost 2 hour infomercial for Google and the continuing comic relevance of Vaughn and Wilson is seriously not worth a full price admission.

Thanks for the review, sounds like I'll be skipping this one.