Opening this evening at a multiplex near you: 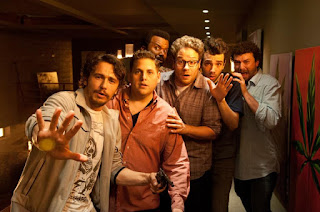 In a scenario that was no doubt conceived between bong hits, Seth Rogen and his gang of Hollywood player pals - James Franco, Jonah Hill, Craig Robinson, Danny McBride, and Jay Baruchel - all play themselves facing the end of times when the Apocalypse hilariously hits Los Angeles during a wild party at Franco’s house.

After the nearly laughless endeavors that were THE HANGOVER PART III and THE INTERNSHIP, comedy lovers have reason to rejoice this season, because the directorial debut of Rogen and writing partner Evan Goldberg (SUPERBAD, PINEAPPLE EXPRESS) is surely the funniest film of the summer.

I laughed more than I remember laughing at a screening in a long time, and with the lines and sight gags coming so quickly, I feel like I may have laughed over and missed a whole other movie’s worth of jokes.


It starts off amusingly on an easy going meta level of these people being relatable guys despite having been in hit movies, with Baruchel, who starred with Rogen in Judd Apatow’s short-lived Fox series Undeclared (2001-02) before going on to be in films like SHE’S OUT OF MY LEAGUE, THE SORCERER’S APPRENTICE, and HOW TO TRAIN YOUR DRAGON, flying out to hang with his best pal Rogen in L.A.

Baruchel doesn’t feel comfortable around Rogen’s other buddies - i.e. the rest of the cast - so he doesn’t want to go to a party at Franco’s fortress of a house in the Hollywood hills, but Rogen talks him into it.

The party that the full of himself Franco is hosting is filled with other celebrities playing exaggerated comic versions of themselves including Michael Cera (one of the funniest as he portrays himself as a coked-up bisexual douche), Paul Rudd, Mindy Kaling, Rihanna, Emma Watson, Jason Segel, Kevin Hart, Aziz Ansari, and Christopher Mintz-Plasse (you know, McLovin!). When firestorms and sinkholes start appearing, some of the famous folks present are immediately goners, but the core crew of the six above-the-title stars hole up in Franco’s mansion, divvy up supplies, and try to figure out how to survive the Biblical rapture.

But Baruchel is the only one who actually believes it’s the rapture, the others stupidly dismiss that idea as much as they do him, as Hill and Franco seem to see themselves as rival BFFs to Rogen, while Robinson and McBride, who shows up uninvited and unwanted, are only thinking of themselves.

The film puts the same amount of energy into jabs at the silliness surrounding friendships, and the selfishness of stardom, as it does the scads of gross-out humor involving a severed head being kicked around the room, drinking one’s own urine (how Robinson is able to sell this with charm is a gag to behold), and, via some not bad special effects, a 60-foot Satan with a swinging penis (that’s right). This non-cynical approach to this ridiculous material reveals over and over that these guys’ only concern is pure comedy, and they go all out trying to give the audience as much as they can take.

Things that made me laugh: the makeshift sequel to PINEAPPLE EXPRESS (virally released as a fake trailer on April Fool’s Day earlier this year) that the gang produces to amuse themselves (Rogen: “We should make sequels to more of our movies.” Franco: “How about we not do ‘Your Highness’”), how Hill identified himself when praying (“It’s me, Jonah Hill, the guy from ‘Money Ball’”), McBride’s arrogant and obnoxious behavior (funnier here than on Eastbound & Down) that lead to him getting kicked out of the house, and how the film wraps up in a pop culture-fied heaven (don’t think that’s really a Spoiler!).

Looks like former mentors and collaborators Apatow (whose name is surprisingly absent from the credits here), David Gordon Green (PINEAPPLE EXPRESS, MY HIGHNESS), and SUPERBAD director Greg Mottola weren't needed by Rogen, Evanberg, and crew to help bring the funny this time.

Practically everything that was supposed to be funny in THIS IS THE END was, though I’m sure in a film with such a high volume of jokes, one-liner, sight gags, and scatological silliness in it had some misfired groaners here and there. I was just laughing too hard at the stuff that hit to notice them.

Good to hear this comedy actually worked, I was beginning to lose faith in the comedy scene. Thanks for the review.