Now playing at nearly every multiplex in Raleigh and the Triangle area: 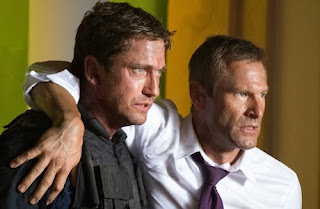 It’s DIE HARD at the White House! It’s AIR FORCE ONE on the ground! It’s INDEPENDENCE DAY meets DEEP IMPACT with the aliens and the meteor replaced with an attack by terrorists!

Yep, if you’re even a semi-regular at the multiplex, chances are you’ve experienced every single element that makes up Antoine Fuqua’s new action/disaster movie, OLYMPUS HAS FALLEN, featuring Gerald Butler as a Secret Service Agent fighting to protect the President (Aaron Eckhart) from a team of Korean terrorists led by the suave well-groomed Rick Yune.

When the film opens it feels like a subpar episode of The West Wing, with President Eckhart doting on the First Lady (Ashley Judd) and their son (Finley Jacobsen) as they depart Camp David with their trusted beloved guard Butler overseeing their transit. Then in the first of many derivative set-pieces, their motorcade gets into an accident due to a violent snowstorm, and Butler is unable to save Judd’s life.

18 months later, Butler is working a desk job at the Treasury (with a great view of the White House out his window he can look longingly at), but he tells Secret Service Head Angela Bassett that he wants back in the game.

Turns out it’s his lucky day because Washington D.C. gets hit hard by a crew of heavily armed, highly trained extremists, who by way of an aerial attack, car bombs, and soldiers disguised as citizens take over the White House (code name: Olympus), leaving its lawn and Pennsylvania Avenue strewn with dead bodies.

Butler, finds his way through gunfire and explosions to get inside the walls of the White House, while the President is 150 feet below the White House grounds in a bunker held hostage by Yune. With the President is the Vice President (Phil Austin), the Secretary of Defense (Melissa Leo), and a fellow agent of Butler’s played by Dylan McDermott. These folks names and occupations are told to us in tiny type on the screen so we’ll know they’re important.

Also given to us is the location and time, as in when Butler finds himself in the Oval Office: “Oval Office, 9:04 P.M.”

The DIE HARD formula comes into play in a scene in which our hero Butler encounters a bad guy he doesn’t know is a baddie (see John McClane’s oblivious meeting with villain Hans Gruber in the ’88 original), and we get to see the White House getting even more demolished. It was so much cooler when it was done by aliens; the explosions aren’t as vivid here.

This movie is also another in the long line of indestructible badass movies with Butler being able to take out waves of thugs, like Liam Neeson in TAKEN, Daniel Craig’s 007, or Jason Stratham in every Jason Stratham movie so there’s no surprises or thrills in the poorly shot and lit fight scenes throughout.

OLYMPUS HAS FALLEN is supreme stupidity on an epic scale with a ridiculously awful screenplay, written by first time screenwriters Creighton Rothenberger and Katrin Benedikt or at least a screenwriting computer program they used.

I did enjoy laughing at it when I wasn’t rolling my eyes, and counting the clichés, but the mundane mechanics wore on me as the thing kept on chugging along. A lot of genre exercises can’t help but appear like collections of stock elements. I had a severe case of cinematic de ja vu when seeing JACK REACHER last year, with its done-to-death formula, but there was at least some passion involved there.

Without an original bone in its body and not an ounce of oomph to make it memorable, OLYMPUS HAS FALLEN falls way short of even being so bad it’s good.

To borrow a line from one of my favorite movies, Terry Zwigoff’s GHOST WORLD: “This is so bad it's gone past good and back to bad again.”

Solid entertainer, not to be missed .On a lazy sunday,if u r showered with oodles of action,entertainment n action again with more than even the ticket price, waat else u want huh???!!! This on eis great stuff, like a 110 min.race which will keep one gelled to ur seats.. I mean right from the car crash which is brilliantly shot to the invasion of the "olympus",its a complete entertainer.. People may be having problem with the originality, but boy if the old formula is being delivered at your doorsteps with 100% cash back offer, would one deny one??? Watch it for the scottish versatile(check out his p.s.i love u)gerard butler who delivers the punches n the punchlines with similar ease.. AAron as always his cool self, freeman has not much to deliver, simply adds to the star caste as does the gorgeous ashley jude.. Crux is Go watch this high octane, in your face violent flick.

Supremely stupid is a good way of describing this film.

Thanks for review, it was excellent and very informative.
thank you :)