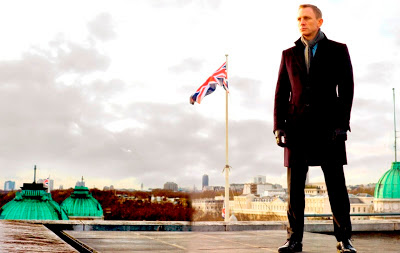 Four years after the lackluster QUANTUM OF SOLACE, James Bond is back in this top notch movie that’s not just one of the best of the entire series, it’s one of the best full throttle straight-up action films in years.

Definitely of this year, as it’s way more adventurous than THE AVENGERS, dangerously darker than THE DARK KNIGHT RISES, and completely out-Bournes THE BOURNE LEGACY. And that’s just in the first 10 minutes.

In a Turkey-set pre-credits sequence that encompasses a chaotic car chase, a motorcycle chase over rooftops (take that TAKEN 2!), a bulldozer demolishing a train carriage while in transit, and a hand to hand fight on top of that train going through a tunnel, Daniel Craig’s 007 has us in the sweaty palm of his bloody hand.

Bond’s superior, M (Judi Dench), has a larger role than usual as her job heading the MI6 is in jeopardy and she’s being targeted by Raoul Silva (Javier Bardem), a former agent turned cyberterrorist.

To help his boss, Bond travels to Shanghai (always gotta be globe-trotting) to recover the MacGuffin of this movie, a stolen hard drive that identifies many undercover NATO agents. This is where he meets the closest thing this film has to a Bond girl, Bérénice Lim Marlohe, who is under the rule of Bardem.

The spunky Naomie Harris, could be considered a Bond girl, but she’s more of his assistant, and there’s no romance going on there. Despite a quick shot of sex in the cold opening, Craig’s Bond seems less interested in bedding random babes than his predecessors, but that’s maybe just a sign of the times.

Bardem’s Silva is the best villain the series has had since…uh, I’ll say Christopher Walken in A VIEW TO A KILL. Like Walken, Bardem has dyed blonde hair and an unhinged presence. It’s a wickedly funny performance that’s introduced to us in a superb long-shot that has Bond’s back to us (tied in chair), and Bardem slowly getting closer as he puts forward a menacing monologue.

In a shoot-out in Parliament, Bond saves M from Silva and gets her to the safety of his boyhood home in the Highlands, an old crumbling castle named Skyfall. That’s where a STRAW DOGS-ish WITNESS-esque tension resonates as we wait for Silva’s killing crew to arrive.

SKYFALL restores gravitas to the series, and has everything you’d want in a modern day Bond movie. First off, it’s got Craig, who I used to think looked more like one of the thugs that would beat up Bond than Bond, putting in his most intense and riveting acting yet in his third performance as 007.

Also, this time out, Craig’s equipped with quips as SKYFALL has a lot of laugh out loud lines. This is another plus as his previous turns were pretty close to humorless.

It’s got lovely ladies (Marlohe and Harris), a sharp screenplay (by Bond writer veterans Neil Purvis and Robert Wade, along with 007 newcomer John Logan), incredible cinematography (by Roger Deakins), ginormous explosions, a catchy not-bad theme song (by Adele), near perfect pacing, excellent editing (by Stuart Baird), stunning set-pieces, Bond’s classic Aston Martin, and well chosen supporting cast members, such as Ralph Fiennes as a stuffy higher-up of M’s (great nod to olden days when he says “Don’t cock it up, 007”), and the always welcome Albert Finney as the groundskeeper of the Skyfall estate.

Some of Bond's back story may seem Batman-like, i.e. he comes from a rich family and his parents were both killed when he was a wee lad, but it still didn't feel derivative of the Dark Knight. No, SKYFALL has a different agenda - it wants to re-invigorate a franchise, not give us a lavish end-game.

As super heroes, and brainless spectacle (I’m looking at you THE EXPENDABLES) usually dominates the box office these days, it’s wonderful to report that Bond is back and at his best. Way to celebrate your 50th anniversary 007!

Post note: I guess the iconic gun barrel deal is officially now at the end of the Craig/Bond movies, before the credits roll. That's cool, I can dig it.

Bond has grown into a complex character over the years. In his last outing, QUANTUM OF SOLACE, his complexities got the best of him. Bond was melancholy and the film suffered for it. In SKYFALL he is no less tortuous but Mendes handles the character with much more control and allows the film’s intricate and energetic action sequences to drive the film forward. Without the weight of Bond’s suffering to hold the film back, he commands even more attention and emerges with even greater strength as a result. This is all the more impressive considering what he has to endure at the onset of the film.