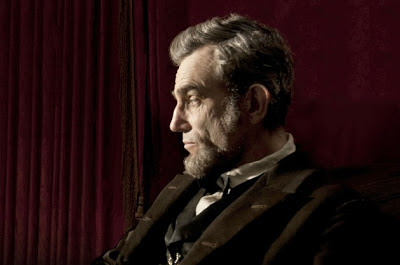 At the beginning of Steven Spielberg’s LINCOLN, based in part on Doris Kearns Goodwin’s 2005 bestseller “Team of Rivals,” we meet the friendly, soft spoken Abraham Lincoln, played by Daniel Day Lewis in another Oscar caliber performance, as he’s conversing with soldiers, both black and white, in the Army of the Potomac’s camp.

When more than one of the infantryman starts reciting the Gettysburg Address with gusto to our 16th President,  I was thinking ‘what, is this written by Aaron Sorkin?’

I knew that it wasn’t - LINCOLN’s screenplay was penned by playwright Tom Kushner, best known for ANGELS IN AMERICA and Spielberg’s MUNICH - but the scene’s simultaneous attempt at gravitas and heartstring-tugging so reminded me of Sorkin’s style that the comparison was hard to shake. However, in this case, that’s not a bad thing.

Spielberg’s modest epic isn’t a life-spanning biopic; it concerns the pivotal last leg of Lincoln’s life, from January 1865 to his death several months later, in which he tirelessly fought to pass the Thirteenth Amendment abolishing slavery, and end the Civil War.

Although it begins on the battlefield, only briefly do we see combat (there’s nothing that compares to the SAVING PRIVATE RYAN’s lengthy opening Normandy invasion sequence), because the film is more interested in the back room deals, with the suspense coming from how close the vote over the 13th Amendment was in the House of Representatives.

Of course, we all know how it’s going to turn out, but that doesn’t harm the feeling of being a fly on the wall for some of the most crucial conversations in America’s storied past.

A cast of recognizable faces help bring history alive, including Tommy Lee Jones (once a scene stealer always a scene stealer, especially as he has the most humorous moments here) as Republican Congressional leader Thaddeus Stevens, Sally Field as First Lady Mary Todd Lincoln (Field’s one-on-ones with Day-Lewis are wonderful - two Academy Award winners reminding us what won them those awards in the first place), the always welcome Joseph Gordon-Levitt in a brief part as Honest Abe’s son Robert Todd Lincoln, and - thank the Heavens he’s still with us - Hal Holbrook, who once played Lincoln himself in a 1976 television project, as the wise, and very old political figure Francis Preston Blair.

Every other face seems to be somebody you may know too - James Spader, David Strathairn, Bruce McGill, Gulliver McGrath (last seen in DARK SHADOWS and HUGO), Jared Harris, Jackie Earle Haley, Tim Blake Nelson, and John Hawkes are all on hand.

Day-Lewis’s and Spielberg don’t offer us a larger than life Lincoln, they give us a humble man passionately driven to change the fate of human dignity (as he puts it), and it’s a portrayal to believe in. It’s made the more powerful because Spielberg refrains from CGI (an era-appropriate Washington D.C. could’ve been created with lavish special effects), and keeps his cameras (or more accurately cinematographer Janusz Kaminski’s cameras) tight on these grand men (or in the case of Lee Pace’s character Democratic Congressman Fernando Wood, not-so-grand).

Spielberg’s long-time composer John Williams (this is their 26th film together) provides a suitably grandiose score, that gets cheesy at times, but overall effectively enhances the narrative turns, even if I’m having trouble remembering it right now.

For most of its almost 3 hour running time (of course, it’s long!) LINCOLN has the thrust of the best entertainment about political matters from the 1939 classic MR. SMITH GOES TO WASHINGTON to the acclaimed NBC drama The West Wing (Sorkin again!), but a few sections drag, and there were times that I thought it might’ve been better as HBO mini-series.

But that probably would’ve denied us the excellent work of Day-Lewis and other A-list cast members though.

There will be many folks that will be turned off by the notion of a long talky history lesson, but with the sheer strength of Day-Lewis’ incredible acting, and Spielberg’s subtle construction (and minimum of his trademark corny sentiment), LINCOLN ought to win over many more folks with the patience to take in what’s being said, how things were changed, and why, to this day, its title subject is considered to be the greatest American President of all time.