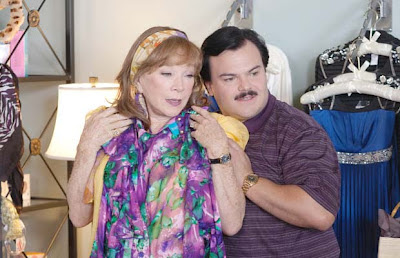 Is it really true that comedy is tragedy plus time? Or is that just something Alan Alda’s loathsome character pretentiously pontificated in Woody Allen’s CRIMES AND MISDEMEANORS?

Well, Richard Linklater’s latest, BERNIE, takes the true story of a Texas mortician who kills a wealthy widow, and makes a matter-of-fact comic docudrama out of it that really works.

It’s not a case of “too soon” as it happened over 15 years ago, but even back then the facts surrounding the murder were more than just a little amusing.

Jack Black, in maybe his finest performance, reunites with his SCHOOL OF ROCK director Linklater to portray the title character, Bernie Tiede, who was the most beloved man in Carthage, Texas back in the mid ‘90s. And by a lot of accounts, he still is much loved in that tiny town, despite the fact that he, you know, shot an 81-year old woman 4 times in the back.

Bernie’s tale is told in large part by a number of actual Carthage town folk, in interview segments that frame the dramatized version of events. We are told, time and time again, what a good Christian, and respected figure of the community Bernie was. Folks often speculated about his sexuality because of his effeminate nature (which Black nails), and what exactly was his relationship with his later victim, Marjorie Nugent (sharply depicted by Shirley MacLaine), who he doted on.

Bernie’s reputation for being a standout gospel singer in the church choir is brought to life by Black’s sincere vocalizing, as is Tiede’s staging of local productions of Broadway musicals.

As the mean old Marjorie (one of the interviewees says: “there were people in town, honey, that would’ve shot her for five dollars”) MacLaine is also well suited. She’s played many surly acerbic characters like this, but here it’s a better fit than in the rom coms and melodramas she has been appearing in as of late.

The murder itself is shown in the film as a momentary lapse for an otherwise all-around decent man. But his handling of the situation by putting her in a freezer, and spending tons of her money in the months following, is where one can’t help but nervously giggle.

Especially when it takes nine months for Bernie to be found out, because, well nobody, except her accountant, missed Marjorie.

The reason for the killing, one that he blurts out while sobbing, is that Marjorie was cruelly monopolizing Bernie’s time. She orders him around, even getting him a pager, and insults his manhood. Still, he could’ve just walked away – he wasn’t obligated to take care of this old woman – but as one of the town folk says, he didn’t want to forsake his meal ticket.

A slick as always Matthew McConaughey (like Linklater a real Texan) plays Danny “Buck” Davidson, the self-promoting lawyer trying to convict Bernie. His bemusement at how the Carthage people stand behind Bernie is amply humorous, as is gung ho determination to win (he has to move the trial 50 miles away to St. Augustine in order to avoid acquittal).

With this kind of material, and with Black on board, they could’ve really gone over the top, but Linklater and crew never lose their grounding. The film sets a tone and stays with it, largely because of Black’s dialing back on his famous funny man persona.

The only complaints I have are iPhones weren’t around in the ‘90s, and that when they show pictures of the real people at the end (vacation photos of Tiede and Nugent together mostly), they don’t show us a picture of Danny “Buck” - presumably because he looks nothing like McConaughey.

Apart from that, BERNIE makes a solid case for the tragedy + time equation.

And stay through the end credits to see a brief glimpse of Black with the real Bernie, and film of James Baker performing his song “Bernie, What Have You Done?”