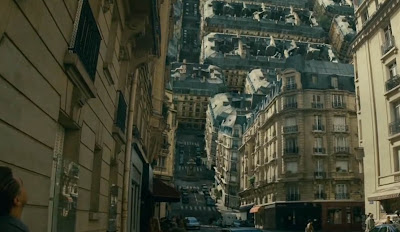 The buzz has been building for Christopher Nolan's followup to the THE DARK KNIGHT for some time now, and it's certainly going to get bigger as audiences see for themselves what this incredible mind bender of a movie is all about. What it's all about I'm still working out, but I can say that it's a vivid visual feast that's one of the best films of the year so far.

It's a difficult film to describe without giving away some of the pure pleasures of the plot so beware of Spoilers! Leo DiCaprio is a dream extractor - an expert in mind manipulation who deals in the underworld thievery of, well, parts of men's minds when they are asleep and dreaming.

DiCaprio works with a team including Joseph Gordon-Levitt as a "point-man" and a dream "architect" played by Lukas Haas. We meet them in the middle of a job inside of the dream state of Saito (Ken Watanabe) - a powerful Japanese business magnate. 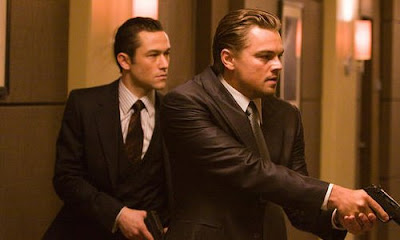 Turns out Watanabe is auditioning DiCaprio and his crew for a bigger job involving "inception" -that is the planting of an idea into somebody's head through the dream world.

For the job they need a new architect so through DiCaprio's professor father (the always welcome Sir Michael Caine) they are joined by a snark-free Ellen Page. DiCaprio also recruits the slick Tom Hardy to act as "forger" for the team. Dileep Rao rounds out the team as their chemist.

The target for their mind crime caper is Cillian Murphy as Watanabe's corporate rival who has the fate of his family's fortune in his hands upon his father's (Pete Postlethwaite) death. Much like in his last film, Martin Scorsese's SHUTTER ISLAND, DiCaprio is haunted by memories of his dead wife (here Marion Cotillard). Unlike SHUTTER ISLAND however here it's impossible to guess where it's all going.

Despite that it's crammed with a lot of action movie clichés - shoot-outs, automobile crashes, explosions, and there's even a sci-chase with machine guns - it never feels contrived. Its endlessly inventive dream inside of a dream inside of a dream scenarios are spell binding, and genuinely scary at times, and the towering worlds of the CGI crafted dream set pieces are overwhelmingly beautiful. Nolan and cinematographer Wally Pfister really outdid themselves on every frame. Likewise for Hans Zimmer who provides one of his most solid scores, one that swells and swoons at just the right moments.

I'll leave other critics to make comparisons to everything from METROPOLIS to the THE MATRIX because it's obvious that the decade it took to finish the screenplay Nolan has woven many influences and ideas into the framework. What wins out is the film threatens to burst out of the screen into real life - just like the most lucid dreams.

DiCaprio skillfully maneuvers through the action with a layered performance that's nearly as complex as the movie that's surrounding him.. Gordon-Levitt has a lot of screen time in his secondary role and he owns it - especially in the stressful yet seriously fun second half.

In one of the best bits of acting I've seen from the actress, Page makes us feel the wonder of being able to create an entire world with intricate acrchitecture and the thrill of manipulating it to your own desires. At one point when she is learning how to structure a cityscape with thought, I really thought she was going to say: "Wow! This is awesome!" Because, well, it really is.

this movie are really good

Maybe i'm just cynical, but I don't get all the over-the-top positive reviews this movie is getting. It was enjoyable, but in no way did it live up to the hype. I was disappointed because I was expecting some twists and surprises, but it was all pretty much predictable. I enjoyed the "you can't trust your own reality" concept better in both The Matrix and Total Recall. Well written review, but I have to disagree. This movie was just OK.

Loved this movie. Very different from Matrix, which I watch every one of them, every chance I get. Also very different from Total Recall. No question was left in my mind as to whether or not he was in back in reality. When tops begin to wobble they fall down. Also don't want to put a spoiler in here, but what happens when you die in Limbo? That would explain the end to me.......Can I ask the question or would this be a spoiler?

Dan, well written review. I saw this movie last night and was pleasantly refreshed. I feel like a lot of people will interperet this movie in a lot of directions, especially with the "what is reality" existential theme. Regardless of how it is examined, I don't think viewers will be disappointed.

I loved this film.

The first time in a long time I was seriously gripped to my popcorn smelling, coke sticky, jaffa encrusted cinema seat.

I didn't love this movie. I thought it was okay, pretty good; but I don't really see it as this amazing thing like so many do.

But I am glad you liked Ellen Page :)

this is a good take on some of the things you were saying
http://splicedreviews.blogspot.com/2010/08/inception.html

He Said She Said said...

I think the people who are not fussed about this film perhaps didn't get it in the way it was intended. From where I sat you are meant to sit an find an answer to the question 'is everything just a dream'. The very fact you are thinking about it is what is intended. Conclusions are irrelevant. I love films like that! We did a review of this as well if you care to read :)

This is another example of how the Matrix revolutionized the world with his unique concepts and original effects. Nolan takes it though to a whole different level

Inception is one of the best movies I've seen in the past few years. It somehow reminds me of The Matrix, though these two movies are completely different. The idea of intruding dreams seems really interesting to me.