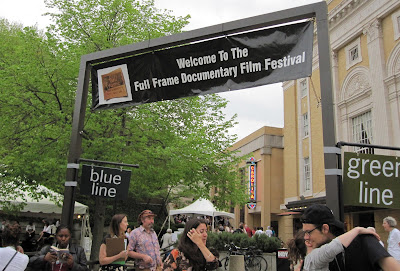 
I just returned home after the first day of the event and am pretty exhausted, but not too tired to tell you a little about the movies I attended. So here goes: 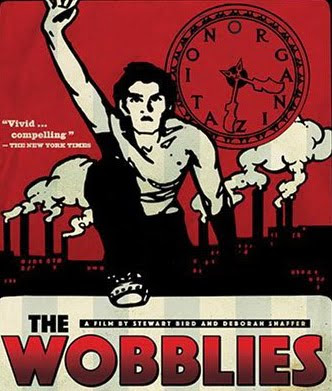 THE WOBBLIES (Dirs. Stewart Bird & Deborah Shaffer, 1979) This older title concerning the story of a radical labor union in the early 20th century seemed like a good way for me to kick off the festival.


Their official title was "The Industrial Workers of the World" (IWW) but they gained the nickname "the Wobblies" because an Asian worker was quoted as saying he belonged to the "I. Wobble. Wobble." Adopting socialist platforms and employing many members of minority groups, "the Wobblies" were extremely controversial, but fondly remembered by the elderly participants interviewed in this film.


There are many great quotes and funny examples of era propaganda but the documentary, as heavily researched as it is, feels not completely fleshed out. Its goal of showing that these folks were never as dangerous as their mug shots made them look is admirable but a bit simplistic. Still, it's a fairly fine and informative film. 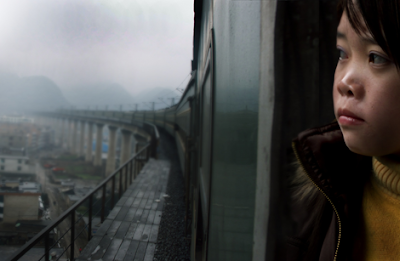 The directorial debut of Lixin Fan, the associative producers of UP THE YANGTZE which this film stylistically resembles, this is far from a conventional documentary. It's shot more like a drama with no narration and the subjects rarely acknowledging the camera.

The opening titles tell us the about the largest migration of humans on earth: the millions of workers returning home for Chinese New Year celebrations every year. Centered on a family struggling to get train tickets for the journey while dealing with their fractured family ties.

Qin Zhang, their sullen teenage daughter, is particularly caught in the middle as she drops out of school in order to work - a decision that doesn't wear well with her parents.

Lushiously shot and well crafted, LAST TRAIN HOME is an absorbing viewing that only suffers from one too many slow whistful shots of Qin starring out over the landscape. 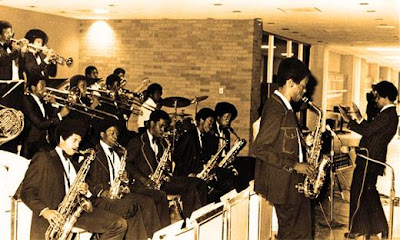 A real winner - a marvelous musical entry about the Kashmere Stage Band, formed by a large group of Houston, Texas high school students in their band class in the early 70's. Led by their charismatic music teacher, Conrad "the Prof" Johnson, the all black band wins awards, records, and tours across the country and overseas before disbanding in 1978 basically because they graduated.

Fast paced editing takes us inside a dizzying collage of footage, photographs, and most importantly beat after beat of primo funk music. We see the scattered members come together after 30 years to dust off their instruments to pay tribute to their beloved leader, which might make it sound like a rhythm and soul version of MR. HOLLAND'S OPUS but it's got too much of its own groove for that.

Rousing, touching, and often hilarious, THUNDER SOUL is definitely one to seek out. Director Landsman was on hand for a Q & A after the screening, giving a few extra insights into the film and to inform us that the Kashmere Stage Band are still out there lining up future gigs. 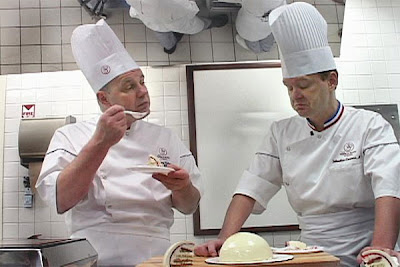 Documentary God D.A. Pennebaker (DON'T LOOK BACK, MONTEREY POP, THE WAR ROOM) is a festival regular who helped put Full Frame on the map, so it's ideal for he and his longtime collaborator Chris Hegedus's newest film to make it's US premiere here, especially on opening night.

It's an elegantly quirky examination of a pastry competition -the Meilleur Ouvrier de France (Best Craftsman in France) in which 16 chefs try to outdo one another constructing elaborate cake creations. Jacquy Pfeiffer, who appeared after the film to answer questions with Pennebaker and Hegedus, its the film's main focus as he flies from his home in Chicago obsessing the whole way about winning.

It's extremely amusing that there's so much pure tension, so much so that the audience gasped loudly several times, in a movie about pastry presentation. It's a very pleasing platter of a documentary - the only thing that I disliked was that I hadn't eaten before seeing it.

With all the delicious looking treats on display throughout the film that wasn't a good idea. Then I remember that earlier in the day they had given out a nice little sampling of chocolates from Pfeiffer's French Pastry School to the press! Gotta rate the film a bit higher now come to think of it.

Please tune in tomorrow for Day Two of my coverage of Full Frame. Now I better go rest up for it.

I really want to see Last Train Home. I saw Up the Yangtze two years ago and fell in love with it.