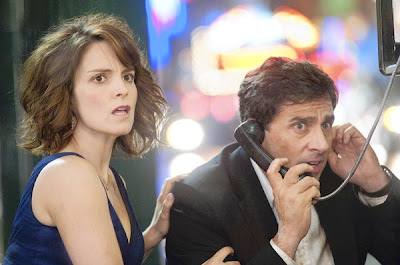 Steve Carrell and Tina Fey are 2 of the most likable and funny people currently on network television in their NBC sitcoms The Office and 30 Rock respectively. That reputation hasn't changed in their transition to the big screen even if some of their previous choices of projects have faltered a bit.


Pairing them up as a bored, and purposely boring, married couple from New Jersey who find themselves caught up in a wild and violent night from Hell in manic Manhattan isn't the most inspired concept in the world, but on the strength of their comic charm alone it's still very likable and funny.

After learning that a couple of their friends are splitting up (Mark Ruffalo and Kristen Wiig in an all too brief appearance), Carrell decides to try to re-ignite the spark of their marriage by abandoning their routine date night plans and heading into the city for a meal at a posh upscale restaurant that they don't have reservations for.


A dolled-up Fey is hesitant at first, but is soon game - same goes for when Carrell, not able to get a table, steals somebody else's reservations which, of course, leads to a case of mistaken identity with gunshots and frantic chases galore.

The MacGuffin here is a flashdrive, or "computer sticky thingie" as Fey calls it, that 2 thugs (Jimmi Simpson and Common) insist Carrell and Fey possess. Our not quite heroic duo elude their pursuers, find out that the thugs are cops on the take, and call upon one of Fey's real estate clients, a shirtless Mark Wahlberg, for help.


It really doesn't matter where the plot goes from here - it's just an excuse for Carrell and Fey to run around and spout out one-liners, many of which are just funny enough to keep the enterprise rolling.
Cameos from James Franco and Mila Kunis as a trashy couple who amusingly share some of the same relationship issues as do our protagonists work better than they should, and Ray Liotta as an angry mobster (once again resurrecting Henry Hill from GOODFELLAS) also adds nicely to the mayhem, as contrived as it is.


It's as predictable as its fabricated THE OUT OF TOWNERS meets AFTER HOURS formula would suggest, but if you like Carrell and Fey (I can't imagine somebody liking one and not liking the other) you'll most likely like this.

Really liked this one, they had great chemistry!