It Was 40 Years Ago Today: Re-watching Woodstock

“A bunch of stupid slobs in the mud.”
- Grace Slick (The Jefferson Airplane) 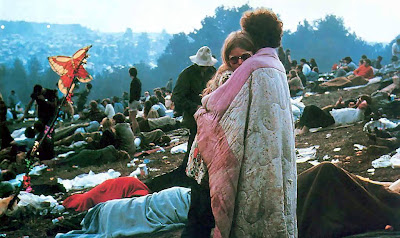 Yeah, Woodstock divides folks - even folks supposedly on the same side.

Whatever your feelings on the famous Woodstock Festival, currently celebrating its 40th anniversary, it’s impossible to deny its lasting impact and cultural importance.

For a number of reasons (one of which being the upcoming movie TAKING WOODSTOCK) I felt like re-watching the movie that was made of the event that fateful weekend. I've seen it before a number of times -usually on anniversaries it seems.

I remember a party in '99 with it on in the background via VH1 and I remember seeing it constantly on the monitor of the video store I was working at in '89.

I borrowed my brother's DVD of it from the late 90's for my recent re-viewing.

As Martin Scorsese, who was assistant editor on the project, said the film "has shape-shifted quite a bit over the years," so I felt I was fine with the 1994 "Director's Cut" and didn't need to shell out for the new lavish 40th Anniversary Ultimate Collector's Edition for an anniversary re-viewing.

This was an old school DVD - it didn't even have a proper menu and the video quality was pretty VHS, but that's apt because that's how I saw it originally, so screw digital remasterings!

For now anyway. The film makers had some fun with the standard ratings disclaimer at the beginning of the film - the "R" starts to ignite at the sound of Jimi Hendrix's "Star Spangled Banner" guitar solo.

It extends to the word "Restricted" which quickly goes up in flames and the implication is clear - this movie is fiery cataclysmic stuff, watch out. That notion though disappears rapidly once you see laid back shots of farm fields and hippie folk arriving to take them over. Workers building the stage and setting up sound equipment while people arrive - some in colorfully painted vehicles, some on foot climbing through holes in the fence.

This all goes on a bit too long as it's a while before we see an actual live performer.

We hear studio versions of Crosby, Stills & Nash and Canned Heat tunes with a split screen image showing simultaneously Michael Lang talking to a reporter from ABC News while the second half of the screen shows the unwashed masses making their way through paths of parked cars and campers. 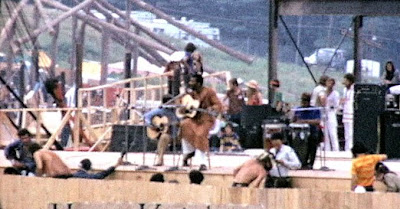 24 minutes into it, Richie Havens is the first performer. He does his hard acoustic guitar strumming thing on a few songs, stopping in between to tell the audience that the next day the whole world will read about how groovy they were.

Out of sight, man! From there we see Wavy Gravy (still going by the name Hugh Romney) mulling about hamming it up and then hear his announcement that the acid circulating is not poison - it’s just been poorly manufactured.

This is where I get weary of reporting on everything in this already well reported movie and will just hit the highlights (or lowlights) as I saw them:

The Who’s bombastically beautiful “See Me, Feel Me” and “Summertime Blues” performance shakes things up after Joan Baez's stoic stance of an act. 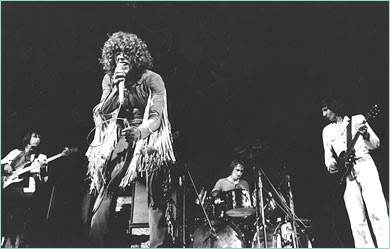 Then the audience is blown away by Joe Cocker’s ferocious “With A Little Help From My Friends” Beatles cover (wonderfully parodied by John Belushi on SNL Oct. 25th, 1975). 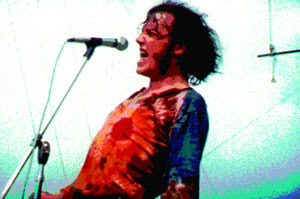 Jeez, there's way too much drum circle footage combined with people running and sliding in the mud after the infamous downpour that the crowds tried to stop with a chant: “No rain -no rain!” Doubt this bit was what won the film a “Best Documentary” Oscar. 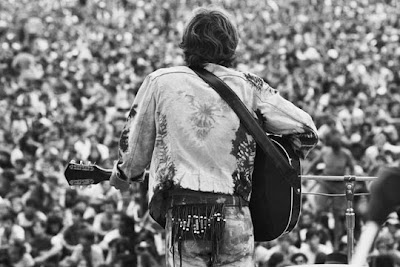 The most treacly bit: John Sebastian solo acoustic singing his song “Younger Generation” concluding by saying “That kid’s gonna be far out.”

Jimi Hendrix's set is definitely the highlight of the entire event - despite that he was the last performer and it was early Monday morning and most of the massive crowd had left. 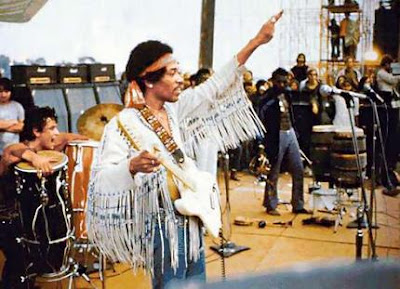 Hendrix's mind bending take on "The Star Spangled Banner" is the bit that alone singed the "R" rating above. The set is available separately and for good reason.

When all is said and done in my book (or on my blog) there's just this music on record that lasts from this colassally overwrought event: The Who, Sly and The Family Stone, Joe Cocker, Janis Joplin, and Jimi Hendrix. The rest is pretty iffy. For example: none of the Grateful Dead's set has ever been released because it sucked - as band members have repeatedly alleged. And who invited Sha Na Na?

As a cultural historical document WOODSTOCK is essential, however as a fun rock concert movie it is bogged down with an unnecessary hyper significance - I found myself siding with Grace Slick's quote above most of the time watching it.

It's an event ripe for major cherry picking - in this era of ripping a decent mix could be made of this but I may suggest alternatives like FESTIVAL EXPRESS and WATTSTAX for more consistent goodies. Just sayin'.

Wow, I can't believe that nobody has chewed you a new asshole for this review yet. I'm not going to but just a couple of FYI things, The Dead's set is available on bootleg, and yes they have acknowledged that they weren't happy with their performance, but the main reason for this was that they played on the second day, after the first rainstorm Friday night which cut Ravi Shankar's set short, so they were getting shocked every time they got near a microphone(this was alluded to in Taking Woodstock) because they hadn't quite gotten the grounding figured out yet. They weren't fond of their performance at Monterey either, but I thought it sounded just fine.(Note: I used to be a Deadhead, hardly ever listen to them anymore, but still respect them as a very important and talented band, I just feel that they hit their peak in 68 and slowly went downhill from there and hung on a lot longer than they should have.)
I can't remember what else I was going to say, if I think of it I'll let you know.
Jon