Chatting With The Creators Of Cinema Overdrive Part 2 of 4 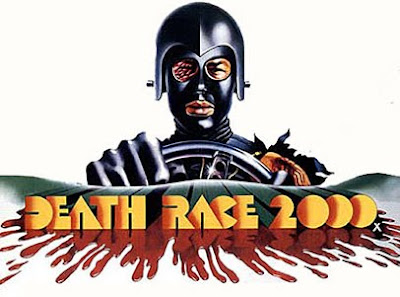 As I reported in part one of this rambling but wonderful conversation, tomorrow night a new repertory series starts at the Colony Theater in North Raleigh. "Cinema Overdrive" which is billed as the best in high-octane cult/horror/exploitation/drive-in and forgotten films that are waiting to find an audience."


This is the second of a 4 part talk with a couple of the creators of the series - Denver Hill and Matt Pennachi. I hope to speak another co-creator, Adam Hulin, in the near future as what Pennachi calls "a social experiment" progresses into fall and beyond. The main topic was tomorrow's premiere feature DEATH RACE 2000 but we also chatted about future showings like VICE SQUAD and PIECES.

FBB: So DEATH RACE 2000 kicks off “Cinema Overdrive”. What made you decide on that for the first one?

: Well, we picked it the day before David Carradine died.
Matt: He died the next day!

: It was very bizarre.

MP: Why did we pick that? Because it’s something that we had in the collection that has the “Cinema Overdrive” flavor, but it’s also the type of film that enough people will have heard about it but never seen.

FBB: That’s just me! I heard about it, I worked in a video store and I remember the cover of the VHS box – it was one that nobody ever rented. People would pick it up and joke about it but put it back down.

MP: (laughs) It’s a lot of fun. This particular print has Swedish subtitles on the bottom because I got it from a collector in .

FBB: (laughs) Well, I think that might add something to it!

MP: It does actually. DEATH RACE 2000 has the right flavor to kick off the series because a film like VICE SQUAD is a great high energy movie but you can’t lead off with it – not enough people have heard of it.

: We want to pull people in, and then gradually get crazier, more obscure with films.

MP: We want to create a community.

: VICE SQUAD, though, is one film buffs go crazy over. It’s like total kick ass non-stop…

MP: Yeah, it’s pretty much as soon as the opening credits start they step on the gas and don’t let up ‘til the end credits; it’s very full throttle. It’s kind of mean in parts. Original MTV VJ Nina Blackwood gets beat up by her pimp in the movie!

Dan: I don’t think I’ve even seen a second of it …oh wait, there was that trailer you put up on Facebook.

Matt: It was a TV spot. (click here to see it) They never made a trailer because that one was of the very last films that FVI (Film Venture International) released before their President, Edward L. Montoro, embezzled a million dollars from the company and was never seen again.

The rumor is that he either fled to or is in the trunk of a car somewhere so they never got around to making the trailer. I like to give a little back story, like on THE DEVIL’S RAIN years ago, I didn’t even plan this but I was up onstage and I said: “When this movie starts you’re going to see the logo for Bryanston Entertainment – is anybody familiar with what Bryanston Entertainment is?”

They were like “uh no” I went on: “They released THE TEXAS CHAINSAW MASSACRE and they released Andy Warhol’s FRANKENSTEIN. They were owned by the mafia. The mafia created this company because they made so much money off of DEEP THROAT, they needed a legitimate company to fence it through. Here’s Bryanston Entertainment.

: I don’t want to put Matt on the spot but that’s another draw of “Cinema Overdrive” - he’s like a walking encyclopedia of cult film knowledge.

I mean, my favorite cinematic experience of all time is still 2001. I just find it very moving, but that being said, there are other shared social experiences that are really…fun and energetic.

This summer, going to the movies, like with a lot of first run movies…how often is it fun? Maybe one or two times out of ten?

That’s why I get excited about a film like UP or ANVIL that actually hits on all cylinders and they really did a good job with it. So many things are so half-assed productions. With “Cinema Overdrive” though, granted I’m not foolish - I know what people think about these films in the grand scheme of things. That being said I don’t feel irreverently about them. I enjoy them for what they are.

A lot of times regardless of where they fall in the scheme of art, these films work awfully hard to entertain you. Awfully hard. There’s something to be said for that… because the great rule of exploitation film making is shoot whatever you want, just don’t be boring!

If you are anywhere near the Triangle area tomorrow night - try and make it out for DEATH RACE 2000 at the Colony Theater @ 8:00 PM. Matt promises a slew of jaw dropping vintage trailers to accompany it and for $5.00 it's a deal you can't pass up.