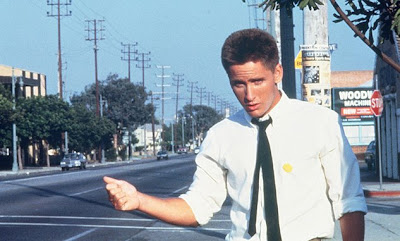 It doesn’t get any cult classic-ier than Alan Cox’s 1984 ode to the sleazy underbelly of Los Angeles, REPO MAN. As such, I wasn’t alone to be thrilled to see it on the schedule for their great revival series Cool Classics at the Colony as the packed house proved last night. 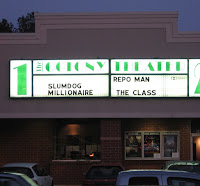 Denver Hill, manager of the North Raleigh theater, introduced the film and asked how many had seen it before. A huge percentage of the audience including me raised their hands.

He then asked how many had seen it at the theater and a very few people raised their hands. I was too young to see it on the big screen in its original release because of its R rating but I saw the movie many times when it hit cable in the mid '80s.

I believe I had it on a VHS tape recorded in the fast speed so it could be crammed with a couple other movies. That tape is long gone but the movie remained in my memory as one of the funniest weird movies I had ever seen.

I was anxious to revisit REPO MAN and see if it still holds up. I downloaded the soundtrack and its beautiful but scary blend of punk - Iggy Pop who provided the title theme with tracks by the Circle Jerks, the Plugz, Fear, and Black Flag was deliriously dated but still held up. The movie is unsurprisingly the same way - Cox’s surreal story of crusty jaded repossession agents, punk rock thieves, and a 1964 Chevrolet Malibu that may contain aliens in its trunk has lost none of its crazy charm. The audience laughed heartily at the first close-up of a young Emilio Estevez as the movies protagonist Otto with his buzz cut and a crucifix earring but then they laughed at just about every other shot too.

Especially shots of a grocery store full of generically packaged products such as white plain beer cans with only the word -->“beer” on the label. Estevez slugs a coworker (Circle Jerks bassist Zander Schloss) and quits his stock clerk job at said store, but his bad attitude collides head on with bad luck as he finds his girlfriend (Jennifer Balgobin) cheating on him and that his hippie parents have donated his college fund to a television evangelist. 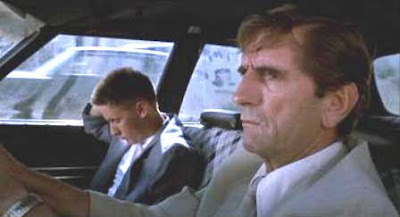 Estevez stumbles into the repo business by way of the crotchety, but always lovable Harry Dean Stanton who is a veteran agent for the humorously named Helping Hand Acceptance Corporation.

At first our hero is reluctant to take the job, protesting by pouring one of those generic beers on their office floor but the lure of loot finds him getting chased and shot at in the process of repossessing cars from delinquent owners. Meanwhile, the before mentioned Malibu driven by a mad government scientist (Fox Harris) is being sought after all over town by an FBI agent (Susan Barnes), and competing repo men for its Top Secret cargo. 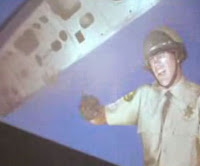 A lethal glow emits when somebody opens the trunk to investigate it - a device which was undoubtedly an inspiration on Quentin Tarentino’s glowing briefcase in PULP FICTION.

This is all punctuated with that before mentioned punchy punk soundtrack that never lets up, and littered with a bunch of quotable lines including: “John Wayne was a fag,” “Only an asshole gets killed for a car,” “I’d rather die on my feet than live on my knees,” “Look at -->‘em, ordinary fucking people, I hate ‘em,” and my favorite: “I know a life of crime has led me to this sorry fate, and yet, I blame society. Society made me what I am.”

The screening at the Colony last night confirmed that REPO MAN still wears the '80s cult classic crown. Sure, it may creak a little at times but it's impossible to imagine the independent film landscape of the '90s and beyond without it.

There is talk of Cox making a sequel called REPO CHICK and why not? I doubt anything he would do would dim the glow of this awesome oddity. If anything it will point more folks to the original but if the enthusiastic audience last evening are any indication the film has legs long enough to last on its own.

Kid In The Front Row said...

I knew nothing about this film! Will definitely be checking it out.

You have to check this movie out, great soundtrack, great effects, and Harry Dean Stanton is amazing!

I don't want no commies in my car. No Christians either.

I don't want no commies in my car. No Christians either.

GREAT MOVIE!! Whatever happened to that guy in the party scene sitting to the right of Archie with the live snake around his neck.