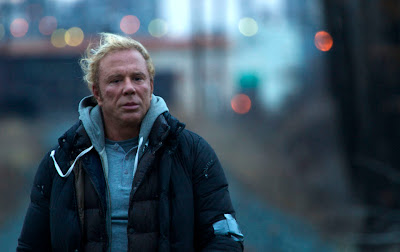 For weeks I’ve been dying to “Witness the resurrection of Mickey Rourke” as David Ansen’s (Newsweek) quote declares blaring from commercials, posters, and every possible promotional avenue. As I’ve been waiting for the film to come to my area Rourke picked up a Golden Globe Award and a Best Actor Oscar nomination as well as many rave reviews so it has been hard as Hell to heed Chuck D’s immortal advice: “Don’t believe the hype.” Well having finally seen it last night, I can say that the hype is very well founded with the accolades and the awards nods much deserved. This is a perfectly un-pretentious piece of vital film making – as ragged and sentimental as it is. Speaking of ragged, Rourke has aged into an odd leathery pumped up creature – almost completely unrecognizable from the scrappy unctuous wiseacre of his 80’s incarnation. His presence and approach here is dead on – there was no point in this movie did I not believe he was this character – the over the hill formerly famous professional wrestler Randy “The Ram” Robinson. 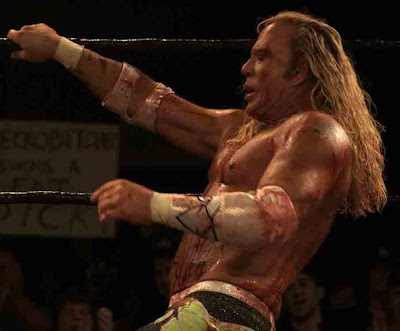 The story is simple and the premise is predictable but the urgency and gritty gravitas given to this “old broken down piece of meat”, as Rourke calls himself, is one of the most powerful portraits of a fighter I’ve ever witnessed, resurrection or not. The camera follows Rourke shot from behind as he enters every scene, facing every situation like he’s entering the ring again. Hoping for a new high-profile match, much like, one would imagine, Rourke himself over the dark periods of the last 20 years, The Ram works in a supermarket where he’s berated daily by his boss – played beautifully by comedian Todd Barry. He’s in love with a stripper named Cassidy (Marisa Tomei), pretty past her prime herself, but she’s reluctant to date a customer, or maybe just scared of the man. At her suggestion he tries to re-establish contact with his estranged daughter (Evan Rachel Wood) but that too is as difficult as staging his comeback. After a particularly horrific match in which broken glass, staples, and barbed wire are used, our punchy protagonist has a heart attack and, of course, he has to face his mortality.
In a class with RAGING BULL and the first ROCKY (go ahead, scoff), THE WRESTLER has a big heart and more importantly, ginormous cahones. I believe Rourke should win the Oscar, not just because we all thought he no longer had anything like this in him, but because it truly is a major first class performance of a lower class louse in severe need of salvation. The movie has a lot of funny moments – I love the scenes with Rourke working the deli counter and his conversation with Tomei about 80’s being the best music ever: “Bet’chr ass man, Guns N’ Roses! Rules.” The screenplay, surprisingly by former Onion satirical scribe Robert D. Seigel, is full of nice natural exchanges like that and coupled with Aronofsky’s command of tone it never grows tedious even as it toils in all too familiar territory – I.E. the underdog redemption scenario. I don’t know if it was the shape of the print my theater got, but the film looked was so grainy and often I felt like I was watching a film that was 20 years old. That’s apt I think; it already looks like a classic and Rourke already seems like he’s never gone away. For some crazy reason right now, that all feels incredibly right.
Post note: I failed to mention Bruce Springsteen’s excellent title song that got horribly snubbed by the Academy yesterday. Hard to believe it got overlooked.
So will THE WRESTLER make The Film Babble Blog Top Ten Best Movies Of 2008 list? Stay tuned to find out.
More later...
Copyright 2004-2018 Daniel Cook Johnson at 1:40 PM

i like how you don't mention the springsteen snub at all, not even in a footnote.

Hey Dan, this is your young co-worker Bryan of the Varsity. I really like your writing based on what I have seen thus far. I would like to add some mention of the aesthetic elements in the film-

I guess some food for thought might be to think about the aesthetic elements such as its documentary style as well as the closing shot of his ascendency to the top of the ring.

Keep up the good work,

'The Wrestler' is predictable melodrama, we've seen this kind of story before (Rocky); however, this doesn't deminish it's quality in a sense of authenticity; Rourke's performance is brilliant - together with Aronofsky's 'low key' documentary style, it delivers true emotional experience on screen...

'The Wrestler' is predictable melodrama, we've seen the story before (Rocky) but this doesn't deminish the artistic level of the film; Mickey Rourke's performance is brilliant, together with Aronofsky's 'low key' documentary style, it delivers authentic emotional experience on screen...