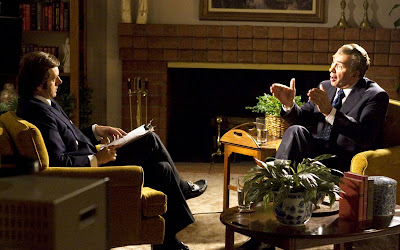 Ron Howard’s adaptation of the Tony Award winning stage play moves briskly as it opens with a montage of early '70s archival footage and period news reports of the Watergate break-in leading to the first impeachment of a sitting President in history.


Seemingly derived from the sweeping intro to Oliver Stone’s JFK, this capsule of video and sound bites gives newcomers to this material ample back story while plunging those who lived through it back into the feeling and tone of the era.

Once that is established, it is summer 1977 - Ex President Richard M. Nixon, disgraced and in self imposed exile in his beach house in San Clemente, CA is approached by ambitious British broadcaster David Frost to make an expensive deal for a series of extended television interviews.

Nixon, portrayed grandly by Frank Langella, sees this as an opportunity to redeem himself in the public’s eye while Frost, given a quirky but still suave demeanor by Michael Sheen, sees opportunity of a different sort – a career breaking, star making spectacle sort, to be exact. Though it contains nothing but men (and a few women) talking in hotel rooms, cars, and the living room set where the interviews were conducted, this is compelling stuff from start to finish.

Paced like many boxing movies with back and forth training sessions up to the final round in the ring, the momentum never lags. Frost struggles to finance the endeavor, insulted by those who blow him off as a “talk show host” while still allowing time for a new love interest – Rebecca Hall (Vicky from Woody Allen’s VICKY CRISTINA BARCELONA) who doesn’t have much to do except sit on the sidelines looking pretty. 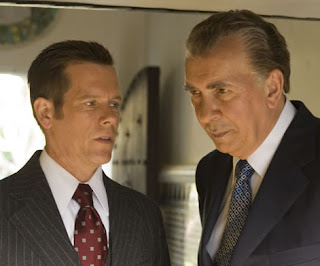 Frost’s team includes Sam Rockwell as passionate anti-Nixon author James Reston Jr. and Oliver Platt as journalist Bob Zelnick who together provide considerable comic relief. Nixon’s corner is dominated by Kevin Bacon as Nixon’s fiercely over-protective post Presidential chief of staff, who both turns in one of his best performances while narrowing down the number degrees of separation between him and everybody else in show business.

“Even Richard Nixon has got soul”, Neil Young once sang and the final third of this movie seems to suggest just that. First presented as a shady money grubbing player disguised as an elder statesman, Langella’s Nixon betrays hidden levels of dark conscience in his home stretch showdown with Frost which would make even Hunter S. Thompson tear up for the man.
If Langella isn’t nominated for a Best Actor Academy Award I’ll be royally shocked.

Howard thankfully retained both Langella and Sheen, from the 2006 stage play written by Peter Morgan. Sheen, who had played British Prime Minister Tony Blair in THE QUEEN (also written by Morgan), has the definitive “deer caught in the headlights” look when first sitting down with Tricky Dick but over time assumes the prize fighter Rocky’s “eye of the tiger” – to bring the boxing analogy back into it.

FROST/NIXON is a tightly focused and deeply pleasing film, certainly one of Ron Howard’s best as director. Whether or not Nixon was redeemable or remorseful doesn’t matter; layered reflective takes on history like this make for the best art regardless (see Shakespeare).

America has not yet seen the real Richard Nixon, for that you have to view the documentary Apocalypse Africa Made in America, in which Nixon refers to African's as just out of the trees with spears and aborted black fetuses as 'The Little Black Bastards!'
The documentary is shocking and eye opening and tells the story of how one administration brought about the downfall of an entire continent. If you think Iraq was bad...wait till you see this film.

The actual full length interviews are available now on DVD. Frost/Nixon The Complete Interviews contains all of the footage that was originally aired. Watching David Frost masterfully interview one of the most infamous American figures of all time is amazing. As the interviews unfold you begin to learn more and more about who Nixon really was and gain a completely new perspective. The fascinating Watergate interviews keep you wanting more and the remaining interviews definitely deliver.