“Dubya” as some in the press have dubbed him), the first ever feature length drama focusing on a President while he’s still in office.


While it does contain plenty of grist for the Bush hater’s mill, it is actually an empathetic study balancing swift satire with earnest melodrama. 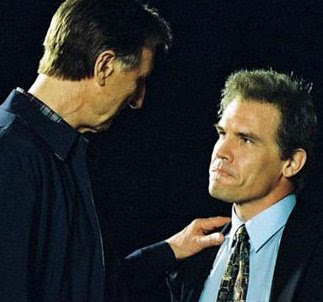 W. skips back and forth timeline-wise from Bush’s ANIMAL HOUSE-esque frat days to the Oval office Iraq war strategy sessions up to his re-election in 2004.


Josh Brolin embodies our 43rd president with a swagger and ever present determination; sometimes overly arrogant, sometimes an impulsive hothead who can’t seem to relax even when lounging watching Sportscenter drinking a non-alcoholic beer and munching on miniature pretzels (if you know your history, you know what happens with those pretzels).


This is a man with major Daddy issues as seen in the recreations of his early days, who disappoints his father (James Cromwell as George Bush Sr.) right and left with his constant career failures and constant drinking. “I’ll never get out of Poppy’s shadow!” he exclaims as he attempts to get a grasp on his destiny. 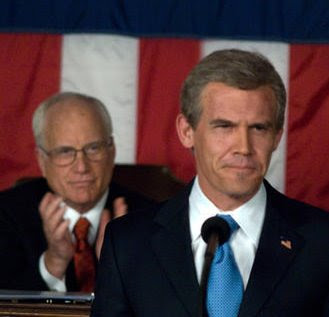 e off as the devil fighting with the angel on Bush’s shoulders in meeting after meeting. Bush’s reasons for the war in Iraq are angrily off the cuff: “I don’t like mud suckers who gas their own people!" and “I don’t like assholes who try to kill my father!”


Despite Powell’s voice of reason deterrents Bush goes to the Cheney darkside believing that he is serving a higher power than his father and never letting consensus criticism get in his way.


Extensively researched and layered with obviously labored over exposition, Stanley Weiser’s screenplay mostly speculates about what goes on behind closed doors more than the already documented public record. 9/11 is thankfully not dramatized or even visually referenced, likewise Katrina and the extraordinary events of the 2000 election (see RECOUNT for that), though there are a number of restaging of W.’s greatest hits.


The “Mission Accomplished” aircraft carrier episode and various press conference and interview examples of embarrassing statements (“Is our children learning” for one) are given Stone’s patented cinematic treatment albeit with a more restrained and less flashy presentation than in his previous work.


Don’t worry though, Stone staples like “glow lighting” on actors in dark interiors, seamless blending of real footage into the movie mix, and a quality ensemble cast (including Scott Glenn, Bruce McGill, Toby Jones and Stacy Keach) are all on vivid display. 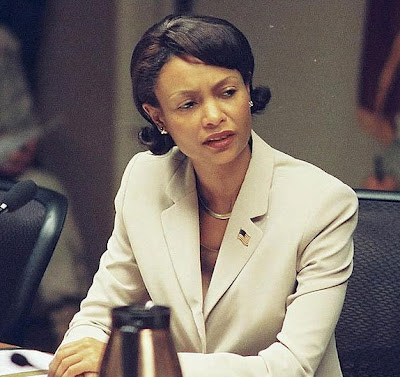 Unfortunately a long time complaint about Stone’s work bears true as the women characters are underwritten and cliché driven. Elizabeth Banks as Laura Bush mostly sits on the sidelines looking pretty offering trite support to her man while Thandie Newton’s snippy take on Condoleezza Rice barely registers in the many boy’s club discussions. 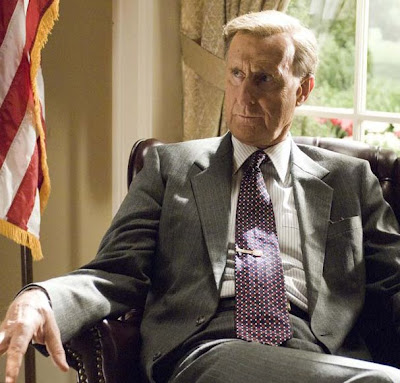 point of view. Brolin though is the show as he carries the entire movie with his performance. With his concentrated vocal inflections and intense brow furthering he pulls off a Bush that is not a caricature but a believable guy which is quite a feat in the world of non-stop Daily Show jabs and SNL impressions of what many consider the worst President ever.


James Cromwell, who never attempts to imitate Bush Sr.’s voice, should be recognized come awards season for his measured and sternly nuanced work here - his presence is the finest and most effective in this film. W. gives a wide personal perspective to a man who many feel doesn’t deserve one.


It will play as a broad comedy to some audiences with folks mining the material for mirth but the poignant sadness of a powerful world figure standing in an empty stadium imagining cheering crowds and a possible grab for baseball star greatness will linger longer than the laughs.


It succeeds on helping us relate with, not hate on George W. Bush even if you, like me, can’t wait to see him leave office.

Oliver Stone's "W" is not the only cinematic portrait of President George W. Bush that you can see at local theaters this week. Indianapolis-based Pink and Blue Films, along with Asylum House Productions, has filmed its own version of "W: The Movie," a surreal, cartoonish, underground take on the second Bush presidency, screening at 7 p.m. Oct. 16 at the Earth House, 237 N. East St.

Budget and production values aside, which version is the more accurate portrayal of Dubya? That may be for history to decide, but here's a quick comparison of the films.

"W The Movie": A meteor containing an ectoplasm-encased W crashes in the Arizona desert. W, his face painted like a pro wrestler, breaks free, steals the presidency, and launches an all-out war with freedom and justice, opposed by the journalist The Blue Mahler.

Oliver Stone's "W": An affable, dunderheaded ne'er-do-well Texas blueblood ascends to the presidency in an effort to live up to his daddy's expectations and is manipulated into a cash-grab war by his advisors.

W The Movie": On 9/11, Bush asks where the Twin Towers are, then instructs his aide to "send that country a dozen roses."

"W The Movie": Drags on about 20 minutes too long; is perhaps a bit too one-sided.

Oliver Stone's "W": Drags on about 20 minutes too long; is not one-sided enough.

"W The Movie": Eaker as Blue Mahler, a free-thinker who dares to take on a tyrannical government.

Oliver Stone's "W": Principled and likable, if a bit dense

I wonder if director Oliver Stone, should have just focused on "satire" "completely" and "omitted" the "earnest melodramatics." when he directed the movie "W" (Dubya) Because from the ad it seems as if the film is heading in the direction of "Satire."
(...more in the vein of 2 Comedy Central shows "Southpark" or "Lil bush" humour.)

Daniel said,“Dubya” as some in the press have dubbed him)"...Daniel, I think the late columnist Molly Ivins, was the first to coin the term "Dubya." when referring to George Bush.

Josh Brolin did a convincing Dubya, though he reminded me a lot of his cowboy character from No Country for Old Men... over all, i don't doubt that 'W.' will have the effect Oliver Stone desired