As I reported a few posts back (“Hey I Finally Saw... ERASERHEAD!” 8/3/08) The Colony Theatre in North Raleigh has been showing a series of what they call “Cool Classics.”

In the last few years they've shown 35 MM prints of modern movie milestones like THE BIG LEBOWSKI and A CLOCKWORK ORANGE as well as guilty pleasures such as THE GOONIES and GREASE. I was pleased as punch to see that Prince’s MTV inspired musical PURPLE RAIN was on the calender this month. I had seen the film before but on video a long time ago so the time is right to have a big screen re-appraisal and here it is: 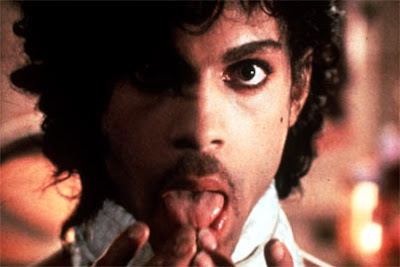 Like an Elvis or Tab Hunter vehicle reshaped for the 80’s, Prince plays “The Kid,” a teased-haired guitar-strangling stage-hopping diva who one night playing at Minneapolis’ legendary 1st Avenue falls for a fresh off the bus, or more accurately fresh off running from paying a cabbie, sexy singing sensation named Apollonia.

The Kid’s competitor Morris Day as himself (everybody but Prince it seems goes by their own name) also eyes Apollonia but she is taken for a ride literally by The Kid on his motorcycle across the countryside montage-style while “The Beautiful Ones” serenades them from one of the biggest selling soundtracks of all time. When on the verge of skinning dipping, Apollonia asks The Kid: “And you...what do you dream of?”

I quipped to my girlfriend Jill that his answer should be - “better acting”. This was the right way in which to view this movie with a plot so bare boned yet still extremely cliche ridden it’s ripe for ridicule.

When the music isn’t blaring and the dance rhythms die down the players engage in melodrama with far from fleshed out conflicts. Prince’s, sorry The Kid’s parents (Clarence Williams III & Olga Karlotas) fight it out on the homefront as his audiences are dropping off at the club because of his risky experimentation (which makes for one of the soundtracks most excitably ambitious numbers “Computer Blue”).

Apollonia seems to offer some sexy solace from The Kid’s stress but when she joins Morris’s band he goes ballistic and strikes her, which is crudely brushed off as part of his moody personality - and this is just after he gives him a lavish guitar as a gift! Moody and brooding seems to be the only notes Prince can or wants to play as an actor here.

When The Kid steals Apollonia from a drunk Morris Day once again on his motorcycle in a dark alley, Day yells: “Motherfucker! You long-haired faggot!”, Jill chimed then in with “that may be the best line of the whole movie...he sounded like he really meant it!” I'm inclined to agree though I think my favorite line was Day to Apollonia earlier in the film: “Your lips would make a lollipop too happy.” 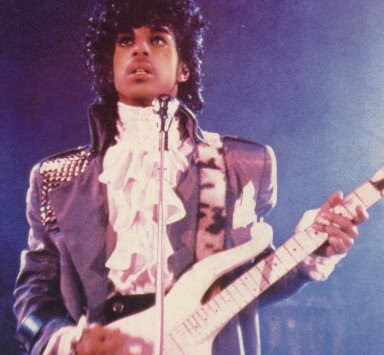 With this MST3K-like riffing on the film debut of the artist formerly known as Prince who became an unpronounceable symbol but now is known as Prince again we could best enjoy the so called plot elements between the music video and concert sequences that really are this movie’s calling cards.

The charismatic and extremely amusing Morris Day, who got some enthusiastic shout-outs at the screening we attended, appears to be the most fully rounded character but thats most likely from what he brings to the role and not whats in the screenplay which if I found out that there was more than one draft of I’d be royally shocked.
Somehow despite the hackneyed storyline, the atrocious acting, and time-worn editing, PURPLE RAIN shines stronger than other so called cult classics of the same era largely because of its stellar soundtrack.

The climatic unveiling of the title song, with a melody and backbeat written in the film (but not in real life) by Wendy Melvoin and Lisa Coleman of the Revolution, which annihilates the crowd at 1st Avenue as well as Day and his cronies is wondrous amped-up high gloss camp successfully disguised as devastating drama. To watch it and not smile seems as sinful as Prince’s usual song subject matter and just as naughty too.

I didn't find the acting atrocious as much as non-existent. At least Prince seemed to recognize that this wasn't his strong suite and opted for 'meaningful' and 'soulful' looks whenever possible. And honestly, Morris Day was actually pretty good - but perhaps just because he really was just being himself. Everyone else just felt like they were reading...poorly.

But this isn't a movie you see for it's acting and plot line. It was nostalgic and all the comments and laughs from other audience members made it feel a bit 'rocky horror'esque - Definately a lot of fun!!