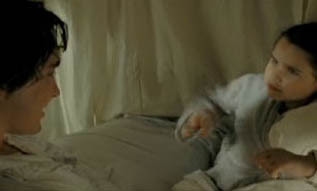 Roy (Lee Pace): “He does tricks for pictures, flickers...moving pictures.”

I only recently saw Tarsem’s THE CELL which looked great but was pretty stupid exactly as a friend (and many critics) warned me. Like Michel Gondry and Spike Jonze, Tarsem came to the movies from the world of music video production (he directed R.E.M.’s famous “Losing My Religion” video) so his visual mastery is his calling card.

Still though I was unprepared for the absorbing and splendiferous experience that is THE FALL. With a much improved less slickly formulaic premise and screenplay (not to mention no stars in the cast) than his previous film 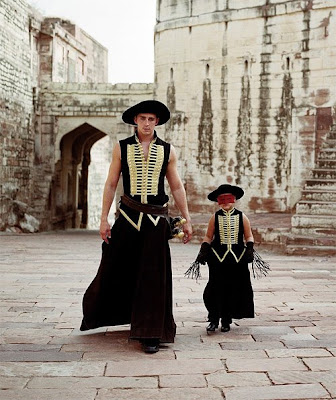 every shot has a purpose and power that is joyous to view.

Set at a hospital at an unspecified era, most likely Los Angeles in the 20’s, the story concerns a young girl with a broken arm (Catinca Untara) who befriends a bedridden man (Lee Pace) while strolling through the wards.

Pace was injured doing a stunt for a movie that involved jumping off a train bridge onto a horse. He charms her with a mythic tale about 5 bandits (he at first calls them pirates but Untara doesn’t like that) who vow revenge on an evil General who banished them to a desert isle.

Pace posits himself as the masked Black Bandit and his partners are an escaped African slave (Marcus Wesley), an Italian explosives expert (Robin Smith), a soul shattered Indian mystic (Jeetu Verma), and Charles Darwin (Leo Bill) who is obviously the brain of their operation as they escape confinement and journey towards salvation or death.

The grand tale overlaps with real life as it is peopled with folks from the hospital and Untara’s family WIZARD OF OZ-style.

* Though this film was originally premiered in 2006, it is only now that it is in wide theatrical release as presented by David Fincher and Spike Jonez. 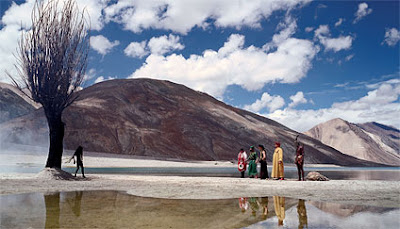 It’s a film filled with incredible shots with plenty of action as well as personal drama that fill the frame too. Pace has had his heart broken along with his bones so he casts his ex-girlfriend (Justine Waddell) as the fabled Sister Evelyn in his impassioned bedtime story.

There is a nice chemistry between Pace and Untara and a charm to this whole pretty package even when he uses the story as a bargaining tool to get her to break in to the hospital’s sanctuary to steal morphine for him. Yes, all this luscious euphoric beauty comes for a dark price but not one that would be too intense for most intelligent kids.

That’s right, at heart this is a kids movie but an incredibly stylish and inventive kids movie. I was expecting something along the lines of the gothic tension and creepiness of PAN’S LABYRINTH but THE FALL is more colorful, infinitely more clever, and frankly a lot more fun.

Reviews have been very mixed (except for Roger Ebert who gave it 4 stars and wrote that the film will most likely make his top ten of the year list) but I implore those to look for it if it comes to your area.

The beautiful photography and fantastic CGI-free imagery deserves to be seen on the big screen - it would truly make a fantastic IMAX movie. A wonderful ride stocked with eye candy as well as a tribute to the power of storytelling, you will really be missing much if you miss THE FALL.

lol i just compared this film to hildalgo. i reviewed it on my blog months ago. i saw the trailer one day and was determined to see the film. i finally saw it and wasn't impressed. i think adding comedy to it hurt it. i was a good story and like you said more or less a new age wizard of oz. i just wasn't moved.