Just As Everybody Says - WALL-E Is Wonderful 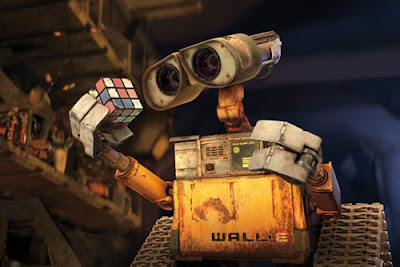 Everybody (well, just about everybody - the film is at 96% at Rotten Tomatoes) is raving about WALL-E and it is well deserving of the acclaim. As the latest in the line of popular sophisticated animated Pixar films it is set in 2700 and involves a lonely rusty robot left behind to clean up the Earth after pollution has deemed it unlivable many centuries previous.


As the humans have retreated to what Buy’ N Large (think Wal-Mart) CEO (played by a non-animated Fred Willard) calls “the final fun-tiere!” on a large corporate cruise-ship space station, WALL-E (stands for Waste Allocation Load Lifter - Earth) compacts old trash into cubicles and builds skyscrapers out of them.


He collects what strikes his fancy - a Rubik’s cube, silver lighters, a dingy old hub cab that he tips like a hat while watching an ancient videotape of HELLO, DOLLY. It’s apparent up front that this machine, as well as this movie, has a big heart as he befriends a cockroach and looks longingly to the sky while replaying love song sound-bites from his before mentioned favorite movie.


When a probe named EVE (stands for Extra-terrestrial Vegetation Evaluator) from the ginormous spaceship comes to Earth looking for plant-life, WALL-E is intrigued. She’s a shiny new model with a noble directive and after one of the mightiest movie meet-cutes I’ve ever seen, WALL-E is soon smitten. I really don’t want to spoil any more of the nice narrative surprises or the tons of ingenious ideas here so that’s as far as I’ll go with the plot.

A friend mentioned IDIOCRACY (Mike Judge’s failed futuristic dumbing-down of society satire) right as WALL-E began so it was hard to shake the similarities of a trashed-out Earth with remnants of non-perishable plastic products covering every square inch.


There is no big spelled out environmental preachiness here though, the narrative is too clever for such moralizing - more fun to be had in spectacularly imagining a future where cute robots sift through the debris and help mankind get back on track.


There are many echoes of past sci-fi classics which also involved cute and not so cute robots - the warp speed, musical queues, and sound effects of the STAR WARS movies (thanks to Academy award winning sound designer Ben Burtt who also does the voice of WALL-E) and 2001 in both the character of the evil ship’s Computer (voiced by Sigourney Weaver!) and the use of the grand “Also Sprach Zarathustra.” Jeff Garlin (Curb Your Enthusiasm, I WANT SOMEBODY TO EAT CHEESE WITH) does a enthused performance as the Ship’s Captain who despite his hard to move girth may find a spark of inspiration from the passionate power-activated robots who suddenly appear before him.


In the matinee crowd full mostly of families with many little kids I sat in watching this mind bogglingly beautiful and funny movie I heard a lot of laughter of course, but there was also much crying, awe-ing and the very vivid sensation of an audience being profoundly moved.


Score hit #9 for Pixar - in my book, or on blog, every one of their films has been better than the last and WALL-E is not only the best yet but one of the best films of the year.

I've given it several days to digest, to ensure I'm not being hyperbolic, but I truly believe this is the best movie that Disney has ever attached its name to. And that includes the WWII-era classics of Pinocchio, Dumbo, etc, the Little Mermaid/Lion King run, and the top shelf Pixar flicks such as Finding Nemo.

It's just magical - making all the other movies out there look like snuff films fused with child pornography.

I have enjoyed every single Pixar movie, would you say this one lives up to the standards of its predecessors?

I think it would be safe to say that if PIXAR shut down tomorrow ( heaven forbid) it would go down in film history as the company that created WALL-E - a film that established the gold standard of film making.