Time for some reviews of recent release movies, both on the big and small screens that I can't wait to babble about.

Now showing at a theater near you: 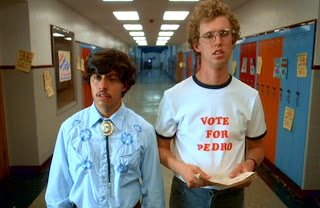 Funny or just funny looking? Hard to decide about a movie made by Mormons about a high school geek oddball (Jon Herder) in Idaho and his quirky misadventures. Quirky humor seems to be the rage in recent independent comedies so much so that one critic (Sean Burns from the Philadelphia Weekly) said that this felt like the work of "a lousy Wes Anderson cover band." I'm not sure I'd quite say that, but it's an amusing line. It's at least a good-hearted flick that a lot of displaced kids will take to, but it's also like a smirking breeze that just blows by. 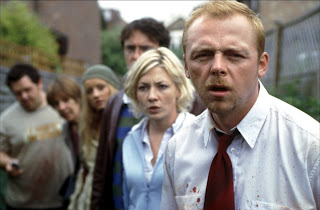 More hilarity than horror, with an infectious amount of energy and wit by the cast (mostly from the BBC sitcom Spaced), and Wright's inventive camera work all make this a comic blast. Some critics are predicting this may become a cult classic in years to come. They might be onto something. It's nice to see Lucy Davis and Martin Freeman from the brilliant BBC program The Office make appearances too. 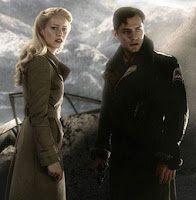 SKY CAPTAIN AND THE WORLD OF TOMORROW
(Dir. Kerry Conran, 2004)

More a cinematic display of the world that yesterday thought tomorrow would look like, Kerry Conran's debut feature film positions itself as the ultimate in retro cinema. Or maybe it's what Harry Shearer called "nowtro" in A MIGHTY WIND.

Old school sci-fi ideals mingle with new school computer generated imagery to make a 2004 movie look like it could have come from the '30s or '40s. Jude Law and Gwyneth Paltrow star as the hero and heroine who go through a narrative as cribbed from old Flash Gordon and Dick Tracy as it is from James Bond and STAR WARS.

For a number of amped-up sequences, SKY CAPTAIN works and is a fascinating experiment, but unfortunately it drags horribly in places and the sense of innocence it tries to evoke is so long gone that it may leave viewers puzzled. Still though such an ernest while overblown concept movie is hard to dismiss. Long live Nowtro!

Movies that are about making movies hold a certain interest but the claim that some critics have made that finally blaxploitation has it's DAY FOR NIGHT seems to miss the point.

This is about the making of a real movie, SWEET SWEETBACK'S BAADASSSSS SONG (Dir. Melvin Van Peeples, 1971), so the whole 'movie within a movie' cliche doesn't really ring true. This is more interestingly about the struggle and satisfaction of the film making process as told by the son of the original film maker (and based on Melvin Van Peeples' book: "Sweet Sweetback's Baadasssss Song: A Guerilla Filmmaking Manifesto"). This completes a circle of sorts as Mario Van Peeples as a child had a small part in his father's film.

Funny, intense, and emotionally endearing in its last half hour this is exactly what it what it claims to be, that is, BAADASSSSS. It's also without a doubt the best project that Mario Van Peeples has ever been involved in. 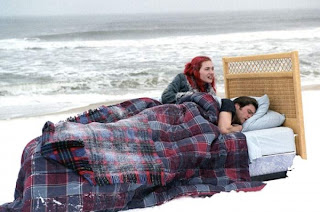 A nearly flawless existential comedy with a Philip K. Dickensian kick! I don't need to recount the plot as just about everybody reading this has surely surely seen this flick. So now what's maybe the best movie of the year gets a splendid DVD release.

Commentaries, deleted scenes, and featurettes augment this disc, and they're all worthwhile, but the movie by itself would make a splendid DVD. Charlie Kaufman, while working with well trodden egghead memory erase concepts, wrings an imaginative free form story out of every day truths and it gets better with every viewing.

A thinking man's rom com, ETERNAL SUNSHINE is a delight in every way. Jim Carrey puts in the restrained every-guy performance that comes off as more impressive than his 'in-your-face' persona of the past while Kate Winslet gives a greatly confident spin to her impulsive artsy book store slave gal with her ever changing hair colors.

Gondry's inventive visual style along with a wonderfully chosen cast supports Carrey and Winslet, that includes Kristen Dunst, Mark Ruffalo, Tom Wilkinson, David Cross and Elijah Wood. So check it out, and consider giving your own existence a jump start, why doncha?!!?