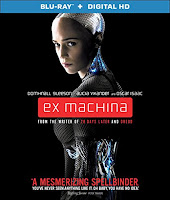 It’s time to take a break from all the summer sequels and highly hyped blockbuster wannabes clogging up the multiplexes, and take note that one of the best films of the year, Alex Garland’s sleek, dark sci-fi thriller EX MACHINA drops this week on Blu ray and DVD. Despite critical acclaim, it quietly came and went in theaters early this year, but I bet it’ll build its deserved audience quickly on home video.

Domhnall Gleeson (HARRY POTTER AND THE DEATHLY HALLOWS PARTS I & II, ABOUT TIME, FRANK) plays Caleb Smith, a programmer at the Google-esque internet search engine giant Bluebook, who wins first prize in a companywide lottery. This entitles Caleb to a week’s stay at the home of the company’s reclusive CEO, located on his vast mountain estate (location never specified, but filmed in Norway).

In another solidly intense performance, Oscar Isaac (head shaved, but sporting a bushy beard) portrays the CEO, Nathan Bateman, who tells Caleb in their first meeting that his impressive compound of glass, stone, and shiny surfaces isn’t a house, it’s a research facility. After he gets him to sign a non disclosure form, Nathan reveals to Caleb that he’s built an android with Artificial Intelligence and that he wants Caleb to be the human component in the Turing Test - “when a human interacts with a computer, and if the human doesn’t know they’re interacting with a computer – the test is passed.”

Caleb is introduced to the AI, Ava (Alicia Vikander), who via CGI has parts that are transparent, and their sessions begin. Caleb speaks to Ava through a glass wall of an observation room, and, of course, develops an attraction to her. Nathan monitors their conversations on surveillance cameras, but during a power outage (something that happens often, Nathan explains) Ava warns Caleb that “Nathan is not your friend.” 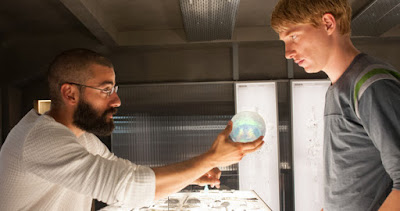 There are other red flags that Nathan, who’s constantly boozing it up, is a modernized version of the classic mad scientist character –he’s hacked into the cell phones of billions, the contest was a smokescreen for this experiment, there is footage of other AI models desperately (and destructively) trying to escape , and he may have programmed Ava to flirt with Caleb.

There is only one other cast member - Kyoko, a Japanese housemaid (Sonoya Mizuno) who speaks no English but definitely has some dance moves as we see when a yet again drunken Nathan tries to get a party going with she and Caleb.

The directorial debut of screenwriter Alex Garland (28 DAYS LATER, NEVER LET ME GO, and DREDD) EX MACHINA is sharply constructed – there’s not a misplaced line, shot, or story beat and Geoff Barrow and Glenn Salisbury’s eerie electronic score effectively connects it all together.

Gleeson’s role is similar to his part in FRANK – a smart ambitious guy who gets way in over his head trying to be a part of something grand – but his acting is more focused here. His nervous exchanges, playing off of Isaac’s rich genius cockiness, give the film its humanity. However it’s the kind of humanity that may seal our race’s doom.

It's easy to see why Gleeson's Caleb would fall for Vikander's alluring Ava, even when he's trying to keep in mind that she's a machine, albeit sentient. Vikander tops off the trio of terrific performances, and makes the viewer go through their own personal take on the Turing Test as well.

It builds brilliantly from an intriguing think piece into a thriller, that’s both psychological and technological, with an ending that floored me then stuck around to haunt me for days. This is cerebral film making of the highest order – Stanley Kubrick, who Isaac says in one of the bonus features that he patterned his character after, would’ve loved it.

Special Features: The 5-Part Featurette “Through the Looking Glass: Creating EX MACHINA,” 8 Behind-the-Scenes vignettes, and SXSW Q & A with cast and crew that's intermittently interesting if you've got an hour to kill.