Opening tonight at a multiplex near you: 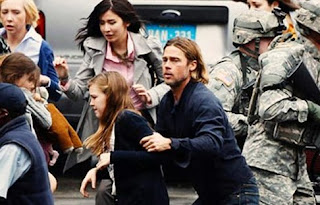 These aren’t the slow “walkers” like on AMC's hit show The Walking Dead, these zombies run at intense speeds, jump long distances, and swarm into a tangled mangled mess of flailing limbs coming at you in 3D in this adaptation of the bestselling 2006 novel by Max Brooks (son of Mel).

But since there’s so much quick cut action, a lot of it in darkness, the zombies aren’t really coming at you, except in chaotic glimpses. Perhaps blame the fact that it’s a PG-13 production, but the zombies here are hard to get a good look at in early scenes set in a Philadelphia traffic jam captured by herky-jerky-cam, a shadowy stairwell in a New Jersey slum, and a dark rainy runway in Korea where they’re mainly seen as spastic silhouettes.

These are locations that Brad Pitt, as a retired United Nations investigator, encounters the blood-thirsty undead as he travels the earth trying to figure out how to stop the zombie apocalypse.

Pitt had managed to shuffle his wife (Mireille Enos) and daughters (Abigail Hargrove and Sterling Jerins) to safety aboard a U.S. Naval ship, but despite wanting to stay with his family he’s talked into saving the world by his former U.N. boss (Fana Mokoena) so he rolls up his sleeves to get the job done.

Pitt co-produced this big ass epic, touted as the most expensive zombie movie ever with its budget of $400 million, so it makes sense that it’s his character’s singular story. We follow him to Israel because they somehow were more prepared for the zombie outbreak, having quickly constructed enormous walls around their cities to protect themselves.

It’s too bad that Pitt doesn’t share with their officials that they should keep the noise down, something he previously learned in Korea, because their loud chanting, aided by misguided microphone use, draws the zombies to pile up in large numbers to scale the walls (this is one of the movie's big money shots).

Anyway, Pitt, joined by Daniella Kertesz as a wounded Israeli soldier (Pitt had to chop her hand off because of a zombie bite), board a plane, which of course seems quiet and safe at first, but in the bathroom, you got it – a zombie!

The airplane’s fate here won’t make anybody forget the spectacular plane stunt work in last summer’s THE DARK KNIGHT RISES (or even the fall’s FLIGHT for that matter), but it’s still one of the film’s most gripping and exciting sequences.

However, when watching this and the rest of the movie I kept thinking that it really didn’t look like $400 million was up there on the screen.

But I know that there were many re-writes and re-shootings (as this Vanity Fair piece details) in which Lost and PROMETHEUS writer Damon Lindelof and Drew Goddard (CLOVERFIELD) were brought in to not just merely punch up Matthew Michael Carhan’s screenplay, they were recruited to create a new third act and ending and that's what added hugely to the film’s already bloated price tag.

That third act, largely taking place in fluorescent-lit labs at the World Health Organization in Wales, has Pitt testing a theory about a possible anti-zombie vaccine.

The suspense has pretty much been drained from the movie at this point, and the lack of an emotional connection is pretty numbing too.

Throughout the film, nobody seems to react to their former family, friends, or colleagues having turned irreversibly into these scary creatures, they just know immediately that they have to get the Hell away from them. When watching people they used to work with at the Wales institute on monitors now zombified, a random comment like “oh, jeez, that was Dr. Rosenthal – what a loss,” would be expected, but the screenwriters seem to be more concern with stating plot-points than at least fleshing out the humans to have at least a few more recognizable feelings than the zombies.

AMC’s flawed but enjoyable The Walking Dead may meander at times, but it compellingly regards this relatable factor with characters struggling with losing their love ones.

Here a kid that sees his father become infected and change (it takes 10 seconds in this film) never shows anything but a survival instinct as he joins Pitt and family on a helicopter to safety. That kid’s thread is never followed up, like a lot of characters that are trotted out – hey, there’s Lost’s Matthew Fox for a second as a a U.S. Navy SEAL! Oh, nevermind. He’s gone.

The 3D conversion doesn’t do the movie any favors either. I can’t think of a single instance where the in-your-face format was effective. The film’s visual appeal is already dicey with its dull gray tones, the addition of the all too typical blockbuster gimmick of the day just detracts even more from the experience.

It doesn't help either that Forster’s ham-fisted direction, formerly on display in the 007 dud QUANTUM OF SOLACE and 2011’s MACHINE GUN PREACHER, barely keeps the film afloat through the chaotic camerawork by cinematographer Ben Seresin (TRANSFORMERS: REVENGE OF THE FALLEN, UNSTOPPABLE).

As this summer’s event movies go, WORLD WAR Z is not as all over the place as IRON MAN 3, STAR TREK INTO DARKNESS and MAN OF STEEL are, but its narrow focus on Pitt’s heroics doesn’t make it any more powerful, especially when the entire ordeal boils down to Pitt being able to walk down a hallway through a hoard of zombies without getting bitten. All the socio-policital commentary in the book has been discarded so that we can have the standard race-against-time to save the day scenario, but then that's what the audience wants, right?

Inevitably, after its best shots and moments have been Spoiled by its heavy promotion over the last several months, Forster’s film can’t help but feel anticlimactic.

Folks who swarm in messy mobs just like the zombies to see it this weekend will most likely find that large chunks of it work as surface level entertainment, but overall its a mediocre and over-reaching opus that has nowhere near the gritty gravitas it’s going for.

Another great review! Thanks

Whenever Brad is there we expect a good thriller and proved again.... good entertainment and thrill............

Excellent review..now i go to watch movie in online.. thanks buddy..