KING CRIMSON AT 50: Light On The Then, Heavy On The Now 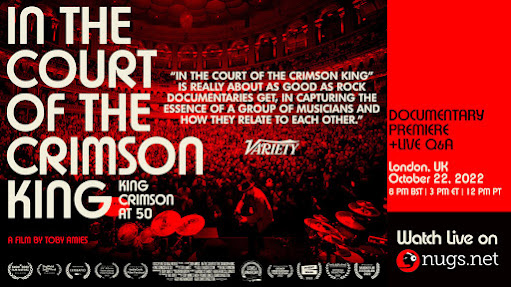 Today, Toby Amies' new documentary about the legendary British band, King Crimson, with a title as long as many of the prog rock band's epic songs, opens in a limited theatrical release, which will be followed by its worldwide one-night-only digital event release on October 22nd.
Now, I've never been into prog rock - nothing against it, there has been some of it that I dug, but just never really explored the genre - so the legend of King Crimson is largely new territory for me. Loving rock docs, even ones about artists/bands that I'm not into, I love to be educated by a well crafted film, full of archival footage, and insightful anecdotes, on the background of beloved musical icons, but early on in this half century celebration of Robert Fripp and company I could tell that this film is no cinematic Wikipedia page.
With only minor asides to the past, Amies' film focuses on King Crimson's pre-pandemic 50th Anniversary tour in 2019, as there's only a handful of clips from the band's late '60s and early-mid '70s heyday, so we spend more time hanging in hallways and mulling about in concert venues than informing newcomers like me to their history.
The film opens on vast shots of an elaborate theater, with stunning exteriors dominated by silver glass domes, and a majestic palace of an interior. Thing is, this beautiful venue is never identified (I learned later that it’s the Parca Della Musica Auditorium, and no date is given). This is the norm throughout the rest of the movie as much live performance material is featured, but without informative info presented. Venues aren’t even listed in the end credits so a rock geek like me who cares about such stuff has to do his own research to put this stuff in proper context.
But what I did get as a takeaway is that King Crimson leader / founder / conceptual mastermind Fripp is a pretty prickly fellow. Several times, Fripp acidly snips at Amies, putting down his questions (“preposterous tosh” he calls one line of questioning), and he just regularly seems annoyed, but he also waxes on wistfully, and pretentiously about the shaping of his vision through different line-up changes through five decades.
It’s impossible to not use the word pretentious when talking about King Crimson, as it’s my understanding that pretentiousness is imbedded in the prog rock genre. So a newbie like me, with little connection to their extensive catalog, may get lost in some of the lofty talk about their process.
But surrounding that is juiciness in the sideline interaction of band members like multi-instrumentalists Jakko M. Jakszyk, and Bill Rieflin, who was suffering from colon cancer on the tour, and passed in 2020. There’s also some cool commentary from the likes of Adrian Belew, Ian McDonald, and Bill Bruford.
There have been 22 members of King Crimson over the years, but this film only covers 14 of them. The rest are given an “Absent from the film, but not forgotten” mention at the end. I can’t decide whether it’s funny or offensive that Rieflin’s cat is given some screen-time over even a tiny mention of any a bunch of legit ex-members of the band, especially as it’s only a 96-minute film.
KING CRIMSON is undeniably for fans over the uninitiated, and the parts with the followers, whether joyous audience shots, or fun interview bits at whatever concert hall, are some of the best moments, but since a newbie like me got a taste of this grand band’s appeal, maybe you will too. But I would’ve preferred more back story as there’s only a handful of old timey TV and live clips, and it would have been nice to hear more about the songs, and the sets chosen for the tour - you know, the music itself, man!
I’ll have to do that research myself, I guess. Dammit, I hate when docs make me do my own research!
More later...
Copyright 2004-2018 Daniel Cook Johnson at 2:10 PM