For the Record, My First Big Screen Viewings Of The Top Directors

On Twitter last weekend, many folks in my feed were posting their responses to the above tweet. Film-minded folks were recalling the first films by the most notable movie makers, and it was fun to see how the titles would often reveal the age range of the participants.

For posterity, I’m sharing my answers in my tweet here with some notes below: 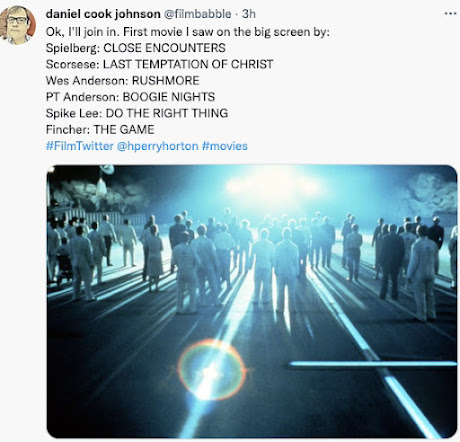 Some notes: The first two films I saw at the Carolina Theatre in downtown Chapel Hill. I saw many crucial movie in my youth at the Carolina, which closed in the summer of 2005 (MARCH OF THE PENGUINS was the last film shown there). RUSHMORE I saw at another long closed venue, the Janus Theater in Greensboro; with BOOGIE NIGHTS and THE GAME at a few unmemorable multiplexes * also in Greensboro. Finally, DO THE RIGHT THING I saw twice in the summer of 1989 – first at the Ram Theater in Chapel Hill, and secondly at the Center Theatre 4 in Durham – both of which have also shut down long ago.

*One of these is still operating as the AMC Classic in Greensboro – the only theater that still exists of all the ones I’ve mentioned.