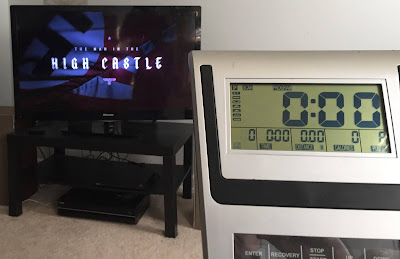 While stuck at home since last Spring due to the damn pandemic, I’ve tried to keep busy by working on various writing projects (like my second book – more on that later), but what I’ve mainly been doing is binge-watching while exercise biking (above is the digital display monitor on my bike, and, of course, my TV).

When I first posted the first installment of Serious Series Addiction in 2010, the term “binge-watching” wasn’t in wide use. I didn’t even use it until a few entries later, instead saying things like “devouring one episode after another.”

Now, binge-watching isn’t just a well known concept – it’s a way of life. Getting on the stationary bike, firing up the Roku, selecting a show on whatever streaming service (Netlfix, Hulu, Amazon Prime, etc.) and energetically pedaling through it really gets me going these days.
Early in quarantine, I took on a program I had been curious about for a while: The Man in the High Castle, the Amazon-produced series based on the Phillip K. Dick book of the same name. 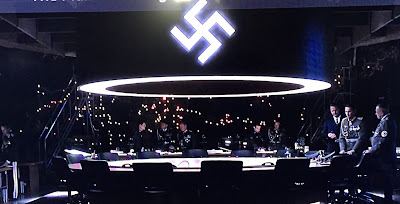 The premise is wonderfully juicy – America lost World War II, and the country has been taken over by the Germans and the Japanese. The show is gritty yet still lush looking with its movie quality production values and boasts a solid cast, which includes Alexa Davalos, Rupert Evans, Luke Kleintank, Stephen Root, and Rufus Sewell, a stand-out as a Nazi officer who somehow becomes a sympathetic character. The show gets more and more compelling as it reaches the inspired conclusion of its fourth season. Highly recommended. 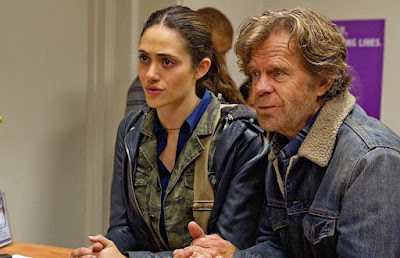 Next up, a show I’ve seen random episodes of before, but wanted to do the complete deep dive on, Showtime’s Shameless, which is based on the British series of the same name. The Chicago-set series concerns the sleazy scams, and shenanigans of the unwieldy and extremely wild Gallagher family which is held together by the oldest daughter Fiona (Emily Rossum). This is because the family’s father, Frank (William H. Macy*) is too drunk or drugged up (or both) to pull his weight. Shameless is over-stuffed with too many characters and plotlines, but it’s fast paced so one can easily enjoyable whoosh through the narratives. At 10 seasons (with an 11th which is supposedly the final one), it’s a lot to take in. It took me about a week and a half and I was pretty exhausted when I finished.
* When I interviewed Macy a few years ago, I hadn’t seen much of Shameless. If I had seen the show in full, that interview would've been very different I believe. 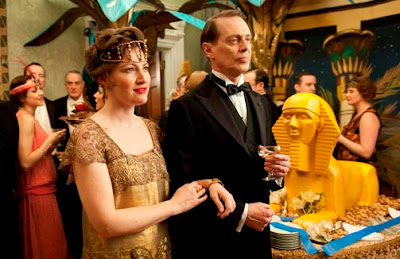 Back when the acclaimed show Boardwalk Empire premiered ten years ago premiered on HBO, I was right there with it, especially since the first episode was directed by Martin Scorsese. I enjoyed it and watched most of the first and second seasons. But, despite that it starred three of my favorite actors – Steve Buscemi, Michael Shannon, and Kelly Macdonald – I drifted away from it. I always intended to pick it back up, and lockdown appeared to be the perfect time.
Set in Atlantic City during prohibition in the ‘20s, the program stars Buscemi as Enoch “Bucky” Thompson, a politician turned bootlegger with a mob boss air. Since Boardwalk Empire was created by The Sopranos executive producer Terrence Winter, and shares a number or writers and cast members with that classic mafia series, it’s unsurprisingly violent as hell. But more importantly, it’s often on the same satisfying level as The Sopranos. And that certainly is no mean feat.
Then there are the shows that I devoured that it seemed everybody was watching the week they dropped. Netflix’s Tiger King was briefly big with many folks posting about it on social media, and even talk of a movie version maybe starring Nicholas Cage. Now, nobody even talks about it. 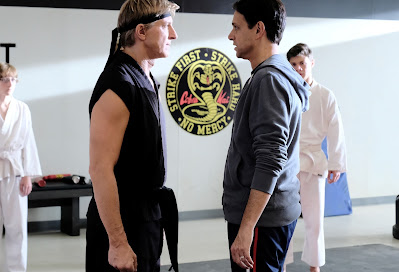 More popular and more likely to build an audience is Cobra Kai, the follow-up to the KARATE KID movies of the ‘80s. Although I wasn’t much of a fan of those films, I enjoyed the first two seasons, which re-unite Ralph Macchio and William Zabka as middle-aged versions of their original rival characters. The show has a great cheesy ‘80s feel to it, and I think it was a good idea to make the leads equal in their individual point of views. In other words, unlike the movies, it’s not so clear cut who’s the real heavy. 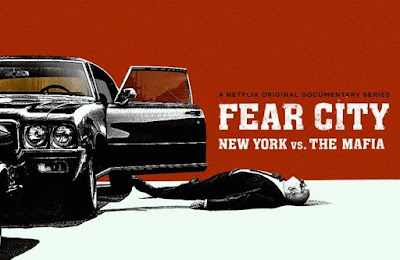 Netflix offered up a couple of limited docuseries that I really enjoyed: Fear City: New York vs. The Mafia, and Challenger: The Final Flight. Fear City focuses on the FBI’s attempts to topple the organized crime empire that ruled the Big Apple in the ‘70s and ‘80s. Many tense and chilling moments occur as the feds grapple with wire-tapping the mob members, with the informative interviews with several of the agents sprinkled throughout (even Rudy Giuliani, who was U.S. Attorney at the time, gives good insight). 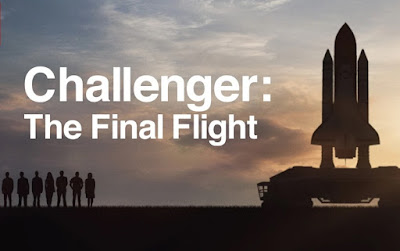 The four segment mini-series, Challenger: The Final Flight, is an also engrossing trip back in time. Even knowing exactly the fate of the Space Shuttle in 1986 doesn’t detract from the power of the story as it provides fascinating background to the event, as well as a thorough examination of went wrong via the investigation of the aftermath. An essential, and unavoidably emotional watch. Other shows I binge-watched my ass off on my bike to over the Pandemic: Ozark, Big Little Lies, Schitt’s Creek*,Watchmen, The Umbrella Academy, Killing Eve, Fleabag, The Outsider, Ratched, High Fidelity, What We Do in the Shadows, and some others I can’t recall right now.
* I was very happy to see the wonderful Schitt’s Creek win all the Emmys a few weeks ago.
More later..
Copyright 2004-2018 Daniel Cook Johnson at 5:56 PM

lol @ devouring one episode after another! So when did the phrase "binge-watching" become a thing, also who coined it? Please do not say Watson!!!!
p.s. I was disappointed not to see Eastenders listed ;)