For Raleigh Film Fans, These Are Some Of The Saddest Sights In Town 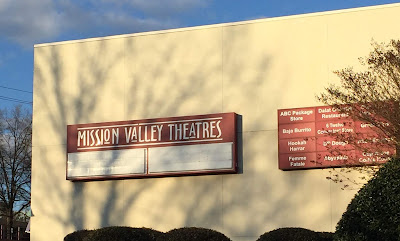 Citing plumbing issues, Mission Valley Cinema closed last summer after more than 45 years in operation. I’ve seen many many movies there since the ‘80s (I’m pretty sure the first movie I ever saw there was the Eddie Murphy/Nick Nolte action comedy 48 HRS in 1982) so I hate seeing the empty marquee whenever I go that shopping center.

There has been talk about the possibility of new owners, so there is some flicker of hope that the five screen venue might re-open someday, but until then that image above will remain a very depressing sight indeed.

Here’s a picture of Mission Valley in happier times - the opening of RETURN OF THE JEDI on May 25, 1983: 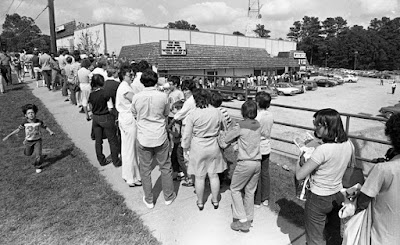 I wasn’t there as I was living in Chapel Hill at the time and saw the movie at the Carolina Theatre on Franklin Street there - sadly that’s another venue that’s no longer with us as it closed in 2005.

I never worked at Mission Valley, but I worked for the same company – Ambassador Entertainment - at the Colony Theater in North Raleigh from 2009 to when it closed in 2015. 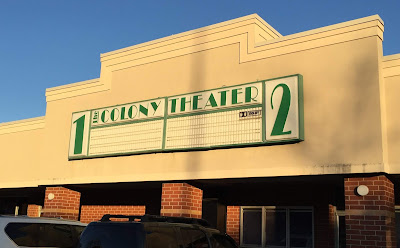 The two screen indie theater originally opened in 1969, and like MVC, I had attended films there since the ‘80s (I’m pretty sure the first film I ever saw there was the Billy Crystal/Danny Devito comedy THROW MOMMA FROM THE TRAIN).

I still work for Ambassador Entertainment at the Rialto Theatre (opened in 1942), and often moviegoers will ask about whether the Colony will re-open. These hopes were fueled by the Raleigh News & Observer in 2017 when they reported that a permit had been issued for renovations. But that was three years ago, and nothing has happened.

Since I live fairly close to the Colony (or the Colony’s old location I should say), I see that sad blank marquee often (the empty poster cases are pretty dismal looking too). Within the last week I stopped by to look through the windows, and it was obvious that no work had been done since the seats were ripped out of the floor five years ago.

On more of an up note, here’s the Colony in happier times with one of my favorite marquees. 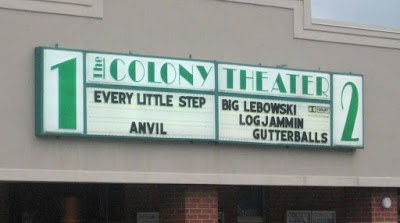 Man, I miss those yearly showings of THE BIG LEBOWSKI. The N.C. Museum of Art does a good job with their LEBOWSKI events, but it’s just not the same as the Colony’s.

If these venues don’t re-open in some fashion, I wish they’d take down those marquees so film fans don’t have to see their blank faces for years and years. But maybe it’d be worse if they took them away. At least they are reminders of what was, and serve as some kind of marker. Maybe that’s why I made this post with pictures of them.

Since I’ve mentioned three theaters that have closed in this post, I guess the bottom line is: support indie theaters!

So there were never "new owners" when MV closed? I fell for that rumour. Was so hoping to be true.