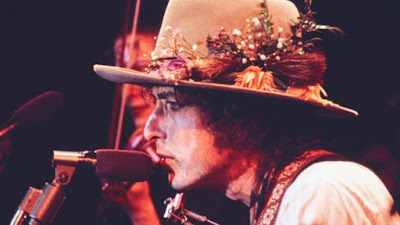 Martin Scorsese’s follow-up to his 2005 Bob Dylan documentary, NO DIRECTION HOME, is a very different film from that examination of the master musician’s early to mid-‘60s beginnings.

The two hour and 20 minute film, in which Scorsese paints a vivid picture of Dylan’s mounting of the legendary Rolling Thunder Revue, a gypsy-style traveling circus of a concert tour in 1975-1976, is a much more abstract, freewheeling work. It jumps around from a 1896 silent film by Georges Méliès (the subject of Scorsese’s 2012 film, HUGO), to vintage TV clips of bicentennial celebrations, and bits of speeches by Presidents Richard Nixon and Jimmy Carter, to, most importantly spectacular live performances by Dylan and his ferocious backing band which he dubbed Guam.

Dylan may say, “I’m trying to get to the core of what this Rolling Thunder thing is all about, and I don’t have a clue because it’s about nothing! It’s just something that happened 40 years ago, and that’s the truth of it,” but he actually has a good deal of insights to share throughout. He’s pretty damn funny too.

So do other participants in the revue, such as Joan Baez, Sam Shepherd, Rubin “Hurricane” Carter, and Ramblin’ Jack Elliot who all provide their often hilarious takes on the tour. Then there are interviews with lesser known figures such as cinematographer Stefan Van Dorp, who shot the tour (“I wanted to show the land of Pet Rocks and Super Slurpees from 7-Eleven”); concert promoter Jim Gianopulos, who claims that the tour was his idea; and U.S. Representative Jack Tanner, who talks about Jimmy Carter getting him a ticket for a Rolling Thunder Revue show.

But the thing is, none of these people are who they say they are. Van Dorp is played by Martin Von Haselberg, who is a filmmaker but had nothing to do with the Rolling Thunder tour. Gianopulos is a real person, but he’s not a promoter – he’s a CEO of Paramount Pictures and also wasn’t on the tour. The most interesting of these characters is Tanner – a character from the Robert Altman/Garry Trudeau TV series, Tanner ’88, about a Presidential candidate.

Why Scorsese added these fictional folks into this epic rock doc is beyond me, but I was still highly amused by the conceit. When Sharon Stone appears to talk about her flirtations with Dylan, and joining the tour, it’s hard to believe anything she says. I learned later that this was a justified feeling as Stone didn’t go on the tour, and it’s speculated that very little that she says is true.

But what does that really matter when there’s so many great musical moments. Dylan, mostly in whiteface makeup, performs incredibly passionate versions of some of his greatest songs like “A Hard Rain’s A-Gonna Fall,” “Hurricane,” “Simple Twist of Fate,” “One More Cup of Coffee (Valley Below),” and “Knockin’ on Heaven’s Door” (featuring a great bug-eyed duet with Roget McQuinn of the Byrds). But one real showstopper that stands out is an absolutely scorching version of “Isis” from Dylan’s album Desire, which was released after the first leg of tour.

When the mind-blowingly powerful performance concluded, many people in the audience at the screening I attended applauded like it was a real concert. I’m not normally a fan of folks clapping at the movies, but this felt seriously justified.

Despite the odd fictional elements, ROLLING THUNDER appears to grandly capture the highlights of one of Dylan’s most vital, and essential tours. With its epic length, it may be too much for casual Dylan fans, but hardcore fans will wish that it never ended.