AMAZING GRACE: Even More Glorious Than I Expected

Opening today at a theater near me: 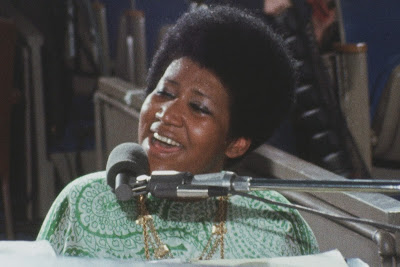 This Aretha Franklin concert film, finally released after 46 years of legal wrangling and technical issues, is even more glorious than I expected it to be.

I had more than an inkling of its wonder as I’ve heard the live recordings, released on the 1972 Grammy-winning album, Amazing Grace, many times, but actually seeing the Queen of Soul at the height of her power, performing her vocal gymnastics, backed by Reverend James Cleveland and the Southern California Community Choir is a mind-blowingly emotional experience for which I wasn’t quite prepared.

The audience I saw it with at the Full Frame Documentary Film Festival a few weeks back definitely agreed as they acted like they were at a real live Franklin show. They rapturously applauded after every song, and sometimes even during songs when the passion of Franklin’s unbelievable belting was hard not to respond to with loud clapping.

The footage of the original real live Franklin show was shot by Sydney Pollack over two nights in January 1972 at the New Temple Missionary Baptist Church in Los Angeles. The shoot well wonderfully, as evidenced by the resulting we have here, but Pollack failed to use clapperboards, which assist in synching visuals with sound, so it took decades before the problem could be solved via digital technology.

Former Atlantic Records A&R man Alan Elliott, who bought the film rights in 2007, had the sound remastered, and, with editor Jeff Buchanan, cut this pleasing 90-minute concert movie out of 20 hours of raw footage.

Meanwhile, Franklin sued to block the film’s release multiple times for reasons that differ in just about everything you would read about the film but seem to all come down to money.

But all that background aside, the film, that was “produced and realized by” (that’s an actual credit) Elliot, is one of the most joyous musical movies I’ve ever seen. Above I’ve called this a concert film rather than a music documentary as it’s a straight-up collection of performances from two nights, with only the context of opening and ending sum-ups. In a documentary there would be interview segments, and explanations to things like how it is that Mick Jagger came to be in the back of the church, but in this live documentation, Jagger’s just there dancing along with the rest of the congregation.

Too many highlights to list here (just basically look at the song listing and see all the highlights listed), but I was particularly moved by the 29-year old Franklin’s take on Marvin Gaye’s “Wholy Holy,” her leading the choir through the rousing AF gospel standard “Old Landmark” (this is the song that James Brown performs in THE BLUES BROTHERS with the same choir btw), and her sweet sequeing of Thomas A. Dorsey’s “Precious Lord, Take My Hand” into Carole King’s “You’ve Got a Friend.” All show-stopping stuff.

Rev. Cleveland should be also be noted as he confidently conducts both evening’s programs and adds his baritone vocal throughout.

For me, AMAZING GRACE is already up there with such concert film classics as STOP MAKING SENSE, THE LAST WALTZ , and GIMME SHELTER. It’s a shame Franklin never made peace with the production before she passed last year, and that Pollack was never able to get the film together before he passed in 2007, and that it took almost half a century for it to see the light of day (or darkness of a movie theater), but it’s here now and it’s a glorious must see. Even if you’re not religious (I’m not), or don’t like gospel (I like some), it’s still powerful enough to make an atheist say “Amen.”