And now, a few new movies that I saw a bit back but am only getting around to babbling about now: 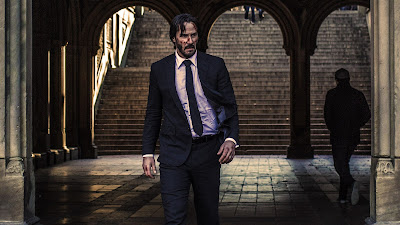 I was among those who were surprised at how much they liked the first JOHN WICK. I didn’t have any expectations going in, but found it to be thrilling, funny piece of high octane action cinema. Now Keanu Reeves, and stuntman turned director Chad Stahelski, are back for a second round of frenetically edited sequences crammed with gunshots to the heads of countless attackers.

As it begins right after the previous entry ended, with Reeves’ Wick tracking down his ‘69 Mustang coupe at a chop shop owned by Peter Stormare as the brother of the mob boss villain from the first one, it feels as much like an extention as it is a sequel. That’s fine by me as Stahelski, working with returning screenwriter Derek Kolstad, keep the original’s dark humor and ultra violent vibe going smashingly.

Sure, the plot is contrived – Wick retires from the assassin’s life for a second time, even reburying his weapons, but when he refuses a new job from a dapper Italian gangster (Riccardo Scamarcio) his house gets blown up (luckily his new dog, the pittbull he got in his first film, doesn’t get killed) and he’s pulled back into the criminal underworld game – but I was highly entertained throughout by how far the filmmakers stretched the limits of their stylized stunt choreography scene after scene.

And, sure, it doesn’t have the freshness of the first, but in Common as the bodyguard of Wick’s mark (Claudia Gerini), it has a worthy foe for our hero to fight, which a killer set-piece at the Rome Continental proves punch after powerful punch. It’s also a bit of a kick to have Reeves re-united with his MATRIX co-star Laurence Fishburne, as a brutal crime lord named The Bowery King, who comes to Wick’s aid.

JOHN WICK: CHAPTER 2 is a solid follow-up that, for the most part, soaringly transcends its status as being a retread. It’s also a much better example of the form than how the Tom Cruise/JACK REACHER franchise is unfolding. Now there’s crossover mash-up I’d like to see: Wick vs. Reacher. But, of course, only if Wick wins, which, for sure, would be the only way it could really go down. 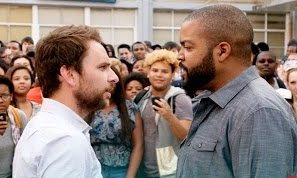 Walking out of the screening for this film, I heard somebody say “I’m surprised this isn’t a summer release!” I chuckled to myself because I found the slapdash comedy, FIST FIGHT, to be a perfect release for the dumping ground season of February.

It’s got a slight premise –Ice Cube as an angry history teacher challenges Charlie Day as a meek English teacher to a fight on the last day of school – a B-list cast (no offense to Tracy Morgan, Dean Norris, Christina Hendricks, and Jillian Bell, but c’mon, who we kidding?), and a sloppy screenplay by first timers Van Robichaux and Evan Susser, so its slotting this season is dead on.

That said, I laughed more than I thought I would. Much like last December’s OFFICE CHRISTMAS PARTY, there are too many funny people on screen for there not to be a least some hilarious hi-jinks.

The use of over dramatic music to enforce the severity of Ice Cube’s threat to Day is a great gag at first, but like every other running joke – the drawing dicks on everything shenanigans of “Prank Day,” Day’s constant attempts to weasel out of the showdown (hard to root for him when he plants drugs on Ice Cube to frame him), and the creepiness of Bell’s character wanting to sleep with her students – it wears thin really fast.

FIST FIGHT is something that I’ve deemed many a movie that’s dropping during these off seasons – a throwaway matinee at best. With this one though, only check it out if you’ve seen absolutely everything else at the multiplex. Otherwise, stay home and watch some random episodes of It’s Always Sunny in Philadephia, that’s where Day and director Keen have put in much, much funnier work together.