Arriving tonight at a multiplex near everybody: 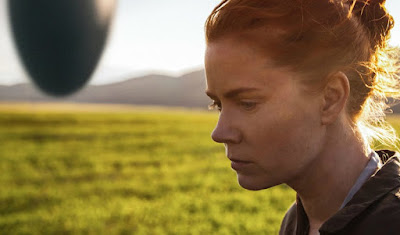 Denis Villeneuve’s follow-up to last year’s excellent cartel counterinsurgency thriller SICARIO, my #3 film of 2015, posits itself as a cerebral sci-fi epic in the vein of 2001: A SPACE ODDYSEY, CLOSE ENCOUNTERS OF THE THIRD KIND, and CONTACT.

Sadly it comes off more like an artsier take on INTERSTELLAR, Christopher Nolan’s failed foray into the genre from 2014.

It starts off compellingly with the news that a dozen ginormous oval spaceships have landed and are hovering over 12 different locations on Earth. Amy Adams as linguist Louise Banks is called in by US Army Colonel Weber (Forest Whitaker) to work in a team with mathematician Ian Donnelly (Jeremy Renner) to make contact with the aliens at their Montana visitation site. Michael Stuhlbarg, also currently seen in DOCTOR STRANGE, is also on hand as CIA Agent Halpern, the chief government liaison who’s monitoring the proceedings.

Every eighteen hours a portal opens in the aliens’ craft so a group can be lifted up into the ship and see and hear what they refer to as “heptapods” through a glass-like barrier in hope that they can get an answer to the key question which is the film’s tagline: “Why are they here?”

On one visit, Adams’ Banks removes her orange hazmat suit, risking contamination with the air, to try and make physical contact with the species. By this point, Banks has deduced that the language used by the two dominant creatures, who Renner’s Donnelly nicknames Abbott and Costello, formed by gaseous clouds of ink that illustrate Rorschach-esque circular sentences, is a non linear type of communication and that when they say “weapon,” they may mean “tool.”

Sure, this sounds and feels very much like CONTACT, but there’s a different vibe at work particularly in the beautifully fleeting flashbacks that Banks keeps having revolving around her daughter (played at different ages by Abigail Pniowsky and Julia Scarlett Dan) who we learn in the film’s heart-tugging prologue died from cancer at 12-years old.

While Banks and crew are making headway with our extraterrestrial visitors, their Chinese and Russian counterparts aren’t fairing as well so there’s the looming possibility that mankind is on the verge of global war.

The movie’s message and meaning gets really muddled in its last third. Imagery collides with itself as Adams’ Banks gets further and further into artsy, dream-like fuzziness. To sort out what happens would mean major Spoilers but I’m not so sure that I processed the films’ themes and plot points properly. The layered reveal of the film’s big twist isn’t handled effectively enough to make it really land. It feels like an afterthought that screenwriter Eric Heisserer adapted without any added imagination from the Ted Chiang 1998 short story that the film is based on (not that I’ve read that).

Yet while there are narrative strands that are left hanging, and no other character other than Adams’ is very fleshed out, the film is admirable on an aesthetic level largely due to cinematographer Bradford Young’s vivid, fluid imagery, and within the muddled execution there is still a semblance of emotional heft. Adams, whose touching performance is among her finest, has a lot to do with that.

It’s just that the whole thing just comes off as a spiritually strained and self important exercise in the end. I don’t think Villeneuve set out to make a mash-up of CONTACT, INTERSTELLAR and THE TREE OF LIFE but I’m afraid that’s what we’ve got here. Were I a star rating critic, I’d give it three out of five stars because it did its job competently in a number of departments, and because it’s a decent piece of well made entertainment. But if it had hit the stars over the moon that it was shooting for, it really could’ve been a masterpiece.