THE BFG: A Fair Fantasy Film With Fart Jokes 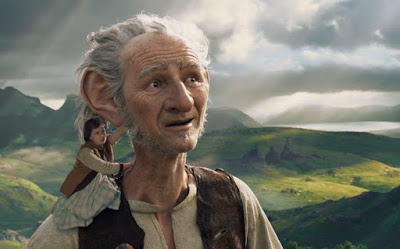 As it’s been half a decade since Steven Spielberg’s collaboration with Peter Jackson on THE ADVENTURES OF TINTIN, it’s been a bit since one of the world’s most famous filmmakers has put out a movie, you know, for kids!

So here comes THE BFG, which stands for “Big Friendly Giant,” Spielberg’s adaptation of Roald Dahl’s 1982 children’s book about a young orphan girl who befriends a behometh, the 24-foot title character, who appears here as a lanky CGI-ed creature who dresses like a peasant and talks funny.

That is, the BFG, voiced and motion-captured by Mark Rylance, who won the Best Supporting Oscar for his performance in Spielberg’s BRIDGE OF SPIES last year, speaks in half-nonsensical jargon using such made up words as “phizzwizzard,” “delumptious,” “splitswiggled,” and “humplehammers.”

There’s even a running gag about “whizzpopping,” which means farting – something that happens when a green, bubbly drink called frobscottle is consumed.

This language is called “Gobblefunk,” and from what I gather it’s pretty faithful to the book (even the fart jokes), but its use in the film doesn’t quite invoke the transcendent charm or the laughter it’s reaching for.

12-year old Ruby Barnhill makes her screen debut as Sophie, the little girl who’s scooped up by the BFG out of her bed at the orphanage in a small unnamed English town and taken to “Giant Country” where he assures her that’s he’s gentle and doesn’t eat children.

However, the other much taller giants in the village, led by the thick-headed Fleshlumpeater (voiced and mo captured by Jemaine Clement), aren’t as friendly and would eat Sophie if they found out she was hiding at the BFG’s humble, but ginormous living quarters (actually a cave).

At night, Sophie assists the BFG in his hobby of dream-catching in Dream Country, which involves the capturing of dreams in the form of bright glowing orbs with a big butterfly net and storing them in jars.

Because of the looming threat of the evil giants, with such names as The Bloodbottler (voiced by Bill Hader), The Bonecruncher, The Gizzardgulper, The Childchewer, and The Meatdripper (their monikers are listed several times throughout the film), Sophie convinces the BFG to go with her to get help from the Queen of England (Penelope Wilson), whose command of the British Army will surely be able to take care of that crew of overlarge, disgusting doofuses.

Rylance and Barnhill play well off of each other’s sensibilities, and the animation at times beautifully builds upon the warm aesthetics of storybook imagery, but the experience as a whole feels a bit slight. There’s not much that’s very interesting about these characters, and a little bit of the silly wordplay goes a long way (so do the fart jokes).

THE BFG is a fair piece of throwaway entertainment that gives the impression that Spielberg is coasting. For instance, a scene in which the evil giants are searching the BFG’s cave for Sophie overly recalls the raptors in the kitchen from JURASSIC PARK or the alien probes in the farmhouse basement in THE WAR OF THE WORLDS. The man can do, and has done, this sort of stuff in his sleep.

Sadly, the E.T. trifecta of Spielberg, composer John Williams, and the late screenwriter Melissa Matheson (this is her final screen credit), can’t muster the ole movie magic needed to make this film anything more than mildly amusing.

I'd agree that this seems like a coasting project for Spielberg. Definitely not on par with some of his past fantasy stuff. Otherwise, it's still likable enough for a couple of hours.