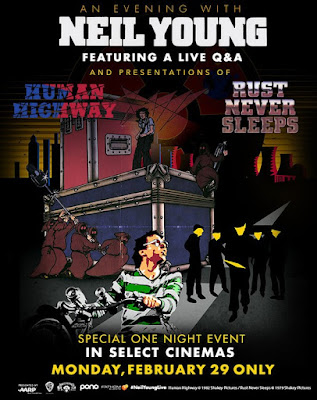 After spending over three hours on Sunday night watching the Oscars on the big screen at the Rialto Theater in Raleigh, I spent the next night watching over three hours of Neil Young at Crossroads 20 in Cary. The program, presented by Fathom Events (and AARP fittingly enough), was dubbed “An Evening With Neil Young” and it was a one-night-only theatrical release of two rare, newly remastered movies by the Canadian rocker, both directed under his pseudonym “Bernard Shakey”: HUMAN HIGHWAY (1982), and RUST NEVER SLEEPS (1978).

I was most anxious to see HUMAN HIGHWAY, having heard a lot about it over the years. It has quite a reputation as being known as that weird movie Young made with Devo, Dean Stockwell, Sally Kirkland, and Dennis Hopper about the end of the world that never got a proper release. It had a release on VHS in the ‘90s, and Young boasts about a laserdisc version coming out in the ‘80s in his book “Waging Heavy Peace,” but it’s been a pretty hard to find curio otherwise. 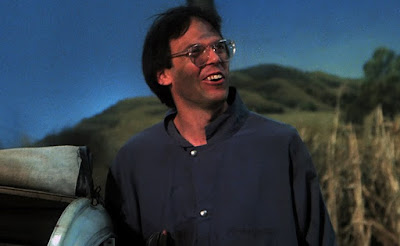 Right off the bat, HUMAN HIGHWAY is weirder than I came close to imagining. Young stars as Lionel Switch, a dorky mechanic at a gas station/diner in the fictional Linear Valley, which, with its purposely fake looking scenery, is depicted like a full-size recreation of a model train set. Stockwell, who co-directed and co-wrote with Young, plays Young Otto, the new owner of the crickety, run down establishment, who’s taking over after the death of his father, Old Otto, whose old timey picture on the wall keeps getting creepy close-ups.

With its nuclear glow sight gags, and its spare surreal settings, there's also a REPO MAN meets ONE FROM THE HEART thing going on too.

The seminal Ohio art rock band Devo – Mark Mothersbaugh, Gerald Casale, Bob Casale, Bob Mothersbaugh, and Alan Myers - appear as nuclear waste disposal workers, who we meet in this scene, which I’ve been long familiar with as it also appears on their video compilation “Devo: The Complete Truth About De-Evolution,” in which they mime to a tongue-in-cheek version of the Kingston Trio's “It Takes a Worried Man”:


Actually, this appears differently in the film, which has Young cutting back every so often to Devo in the truck, who are seemingly driving around the whole day with barrels of nuclear waste. Maybe it wasn’t just a joke one of them made earlier that they need to get to fortifying the water supply.

There really isn’t much of a plot, just a string of scenes centering around a talent show coming up that Stewart, as the waitresses that Lionel has a crush on, is performing in, and the arrival in a limo of Frankie Fontaine, a rock star that Lionel worships...maybe because he’s also played by Young.

Young’s Lionel, who exhibits every goofy facial expression that the actor/director can muster, gets hit on the head and has a crazy dream about being a big rock star himself.

This crazy, hazy sequence, which includes a bonfire of cigar store Indians, features Young’s “Goin’ Back” from his 1978 album Comes a Time, and the film’s centerpiece: a jam with Devo on “Hey Hey, My My (Into the Black)” sung by the band’s mascot character Booji Boy (playing a MOOG synthesizer in a baby crib, mind you), portrayed in a creepy mask by Devo front man Mark Mothersbaugh. It must be seen to be believed:


One Youtube commenter said that this clip is “like sticking your head in a blender from another dimension.﻿”

The largely improvised HUMAN HIGHWAY is a wonderfully strange experience that made me laugh with giddiness a lot throughout. It’s a gloriously campy ride that reminded me of that last wacko episode of the ‘60s show The Prisoner in the “what the f*** am I watching?” department, especially in a concluding zany dance number that has the whole cast dancing with with helmets and radioactive-waste shovels preparing to ascend a staircase to heaven (that's right).

The highlight is absolutely the “Hey Hey, My My” jam with Devo, and it’s a moment that foreshadows Young’s later being dubbed the Godfather of Grunge for his tours with Sonic Youth and Social Distortion; his collaboration with Pearl Jam, and his forays into feedbacky distortion like his seriously odd early '90s live album Arc, which was made up of a collage of noisy song fragments *.

In the performance with Devo in HH, Booji Boy changes one of Young’s lyrics from “it’s better to burn out than to fade away” to “it’s better to burn out than to rust” (he also changes Johnny Rotten to Johnny Spud). This hugely influenced Young as he explained in bio: “One of the Devo members later told me that there was a sign on a shop in Akron, Ohio, where Devo originated, that read RUST NEVER SLEEPS. It was a maintenance and rust prevention service.”

Young kept the rust change in the song, and named his next album and the resulting concert film of the tour supporting the record, RUST NEVER SLEEPS. The concert movie made up the second half of the double feature but between the films was a Q & A broadcast live from the Regal movie theater in Los Angeles featuring Young, Tamblyn, Stewart, and Devo’s Gerald Casale moderated by Cameron Crowe.

Crowe revealed that he visited the set of HUMAN HIGHWAY back in his teenage reporter heyday that was celebrated in his autobiographical 2000 film ALMOST FAMOUS. It was a brief, but lively conversation about the making of the film with Young appearing very amused that it was getting this attention. It was funny to hear Casale recall that he and the others in Devo expected Young to be the grandfather of granola, but when they met him they realized how wrong their preconceptions were.

Following that was RUST NEVER SLEEPS, which I’d seen before (even own the out-of-print DVD), but had never seen on the big screen. It’s a great concert film that captures Young at one of his many peaks, but sadly this particular digital presentation of it looked horrible. Originally shot in 16mm , the film’s image is washed out, and overly grainy and extremely blurry in patches. Despite this, it’s still an enjoyable watch of Young and his band Crazy Horse’s October 22, 1978 performance at the Cow Palace in San Francisco. 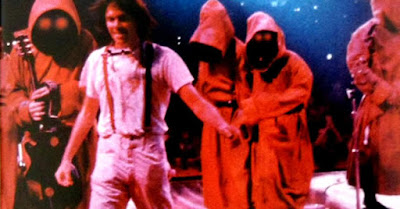 The stage consisted of gigantic amps and microphones, and the roadies on the tour were dressed like the Jawas from STAR WARS (the huge sci-fi hit had been released the previous year). It’s fun to watch the roadies with their cloaks and lights for eyes scurrying around throughout - a roadie wearing a yellow Devo radiation suit can also be seen - but the real attraction is Young’s often definitive renditions of some of his best songs including “Thrasher,” “After the God Rush,” “Powderfinger,” and “Cinnamon Girl.” 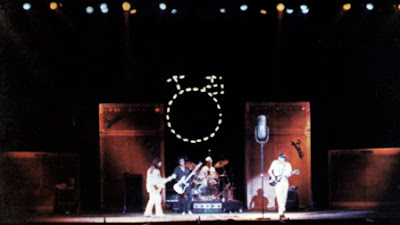 I was highly reminded of the first time I saw Young live, on the Ragged Glory tour in '91 at the Dean Dome in Chapel Hill, N.C., as he reused the oversized amps and mikes, and a lot of the same setlist (I saw him only one other time, at Walnut Creek Amphitheater in Raleigh in 2000).

Both HUMAN HIGHWAY and RUST NEVER SLEEPS are both due to be re-released on DVD on April 22nd via Reprise, Young’s long-time label. I'm not sure if I'll actually purchase HUMAN HIGHWAY for my collection (I'm a NY fan, but not hardcore), but I am happy after all these years to finally see it.

* While writing this piece I found a clip on Youtube of somebody putting a CD of the album Arc into the microwave. Now, that's an incredibly odd, yet perhaps apt, reaction to an incredibly odd album.