Now playing at an indie art house, and maybe a multiplex or two, near you: 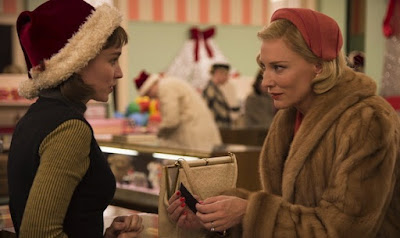 Todd Haynes sixth film, CAROL, his follow-up to his masterful 2007 Dylan deconstruction I’M NOT THERE, has been drawing comparisons to John Crowley’s BROOKLYN, which was released earlier in the prestige picture/Oscar bait season of fall 2015.

Both are New York City-set period pieces concerning young women who work in Macy’s-style department stores, both illustrate the coming-of-age experiences of these women in the restrictive society of the early 1950s, and both are based on bestselling, award-winning novels.

And there’s the fact that BROOKLYN director Crowley was once even attached to direct CAROL.

But while BROOKLYN is a well made, and very good looking drama, Haynes’ CAROL is something else entirely – a much more sophisticated, complicated, and immaculately artful work, which is stunningly gorgeous while BROOKLYN is merely pretty.

An adaptation of Patricia Highsmith’s 1952 book “The Price of Salt” (later re-named “Carol”), the film is told through the eyes of Rooney Mara as 20-something aged shopgirl Therese Belivet, who becomes intrigued by Cate Blanchett as the much older (40-something) Carol Aird, a wealthy New Jersey housewife, when they meet over a counter at Frankenberg's department store.

Carol is Christmas shopping and asks for Therese’s help looking for a doll for her daughter. The two converse pleasantly, then Carol forgets her gloves on the counter when she leaves. Therese arranges for the gloves to be sent to Carol’s home. Carol calls Therese at work to thank her for sending the gloves, and invites her out to lunch where they hit it off further.

In the meantime, we learn that Carol is going through what could become a messy divorce from her angry husband, Harge (Kyle Chandler), while Therese, who dreams of being a photographer, has a boyfriend, Richard (Jake Lacy), who wants to marry her, and live together in France. We also meet Sarah Paulson as Carol’s bestfriend/former lover, who’s relationship is a source of Harge’s chargrin.

Carol invites Therese over for dinner, but the night, and their budding romance, is interrupted by Harge, who demands that his wife go with him and their daughter Rindy (Kk Heim) to Florida for Christmas, but she refuses.

Later, Harge’s lawyer cites a “morality clause” against Carol that would grant him sole custody of Rindy.

Despite this situation, or because of it, Carol and Therese embark on a road trip out west, before which Therese breaks up with the increasingly frustrated Richard.

On the road, the pair gets closer but things go askew when they find out that a P.I. (Cory Michael Smith) that Harge hired to get incriminating evidence on Carol, has been recording their lovemaking (tastefully shot, of course) through their hotel wall.

To fight for custody of Rindy, Carol departs back to New York, leaving Therese behind and their relationship up in the air.

Of all of Haynes’ fine films, CAROL most resembles his 2002 Douglas Sirkian-inspired drama FAR FROM HEAVEN, which also dealt with the taboo of homosexuality in the McCarthy era. But while HEAVEN had a high gloss to its look, CAROL, shot by the same cinematographer, Edward Lachman, has more of a subtle, darker grain. Many shots echo Life Magazine photography in their muted yet still vivid colors.

The always reliable composer (and long-time Coen brothers collaborator) Carter Burwell’s score is a beautiful embellishment to the proceedings. It swoons and swells effectively throughout, never calling too much attention to itself. Mixed into the soundtrack are a well picked batch of ‘40s and ‘50s songs, mostly Vince Giordano and The Nighthawks tracks).

But it’s the performances by Blanchett (yes, there will be an Oscar nomination) and Mara (maybe) that stand out the strongest. Both women bring to nervous life the dialogue in the sharp screenplay by Phyllis Nagy (another nomination, I bet), with Mara’s story arc of a woman blooming finding confidence after years of shadowy confliction, nicely blending with Blanchett’s worried perseverance.

CAROL is another late year addition to my top 10 of 2015 (coming soon!). From the absorbing aura of its near perfect period design and visuals, to its tense yet tender handling of its love story, along, of course, with the terrific turns by Blanchett and Mara – it all made a very poignant impression on me.