Now playing at a multiplex near all of us: 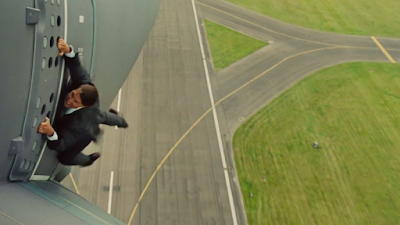 I thought it would've been impossible for Tom Cruise to top his death defying stunt in the last entry in this series (MISSION: IMPOSSIBLE - GHOST PROTOCOL), which was scaling Dubai’s Burj Khalifa, aka the tallest building in the world, without a stuntman for Chrissakes!

But obviously the man takes these missions very seriously so this time out, in the first five minutes no less, we see his Ethan Hunt hanging on to the side of an airplane as it takes off. Again, there was no stuntman. Is anybody going to be surprised if he actually gets killed doing another one of these crazy stunts on a future sequel?

Via his amazing airplane stunt, Cruise’s Hunt is able to stop terrorists’ shipment of missiles laced with nerve gas from reaching its destination and we’re off and running with Lalo Schifrin’s famous theme music blaring over the flashy credits sequence.

Then we’ve got Alec Baldwin as stuffy CIA director Alan Hunley who wants to dismantle the IMF because of their reckless disregard for rules and regulations, and recall all the operatives, especially Hunt, but nobody is giving up his location.

Months later, Hunt is captured by The Syndicate, the evil organization that he’s been unable to prove the existence of to his former superiors. With the help of a British agent (a badass Rebeccca Ferguson) Hunt is able to escape - after a torture room fight scene, that is. Hunt has a lead to pursue – the blonde, well-groomed but rat faced assassin who captured him played by Sean Harris, who’s a much better villain than Michael Nyqvist in the previous installment, 2011's GHOST PROTOCOL.

From there we get killer set piece after killer set piece. In one, Cruise and crew thwart an assassination attempt at the Vienna opera house involving more than one sniper. Another mighty sequence features a major motorcycle chase down Morocco’s winding R203 highway, and yet another has Cruise holding his breath for 6 and a ½ minutes in order to access a computer server that’s stored underwater. Yep, ROGUE NATION’s high ratio of kick ass set pieces puts every other action movie this year to shame. James Bond’s highly anticipated next adventure, SPECTRE, has its work cut out for it to top this.

The twists and turns in the plot involving a flash drive that contains all of the Syndicate’s secrets – the film’s MacGuffin - and how the British Prime Minister (Tom Hollander) and the head of MI6 (Simon McBurney) figure in the cover-up are fine, but it’s the beautifully bombastic barrage of stunts, fights, chases, and self aware humor (a lot of which comes from Simon Pegg who welcomely has a larger role than before) that audiences will most respond to.

Who knew that the MISSION: IMPOSSIBLE series would become one of the most solid and dependable movie franchises out there? It’s stunning and impressive how increasingly stunning and impressive each new entry has been. Christopher McQuarrie, who’s worked with Cruise in JACK REACHER, and co-wrote the Cruise vehicles VALKRIE and EDGE OF TOMORROW, joins Brian de Palma, John Woo, J.J. Abrams, and Brad Bird in the exclusive club of hot shot film makers who’ve performed great genre exercises in the form of these M:I movies.

The bottom line on Cruise has been for a while that whatever you think of his off screen drama with the Scientology and all, the guy makes good movies. You look at his filmography and there’s a lot of quality there. Cruise’s performance as Ethan Hunt works so well because the guy projects an air of cocky arrogance but there’s a detectable level beneath that where you can sense real fear that he has to talk himself out of. In other words, there’s a believable, relatable human being behind the action star front.

I’m definitely down with Bilge Ebiri who posited on Vulture.com that “It’s Time to Start Liking Tom Cruise Again,” and seeing the excellent, intelligent, and genuinely exciting MISSION: IMPOSSIBLE - ROGUE NATION is the best place to now put that into practice.