Opening today at an indie art house near me: 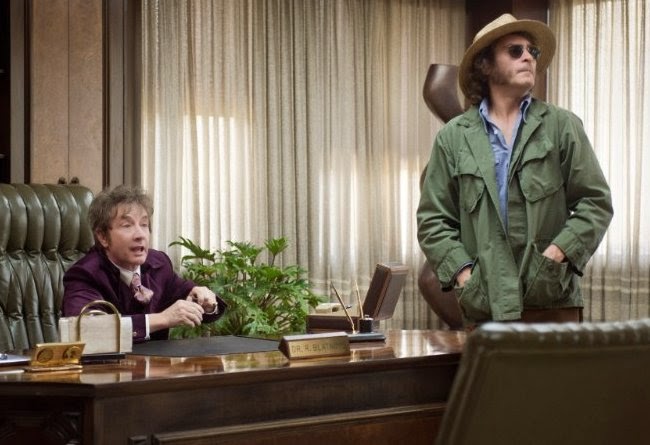 In a recent interview on Marc Maron’s WTF podcast, writer/director Paul Thomas Anderson claimed he wasn’t a stoner, that he really didn’t get stoned.

It’s such a rambling, sprawling, shaggy dog story with a lotta ins, a lotta outs, a lotta what-have-yous as The Dude would say, all filtered through hazy clouds of pot smoke that it feels like it could’ve only been made by a filmmaker who’s stoned out of his mind.

Of course, my mention of The Dude doesn’t come from out of the blue. The film’s depiction of a countercultural underdog unraveling connections throughout the seedy underworld of Los Angeles heavily recalls the Coen brothers’ THE BIG LEBOWSKI (1998), as well as Robert Altman’s THE LONG GOODBYE (1973).

Pynchon’s novel seemed to have those references embedded in it as well, and Anderson puts forth a largely faithful take on the original source material, right down to the exact wording of large chunks of the book’s dialogue.

In his second film for Anderson following 2012’s THE MASTER, Joaquin Phoenix plays pothead protagonist Larry “Doc” Sportello, a long-haired, unkempt sideburns-sporting private investigator living in Gordita Beach, California in 1970. Doc’s ex-girlfriend Shasta (the pretty and appropriately flighty Katherine Waterson) shows up after an absence of over a year, and asks him for his help concerning her current boyfriend, a real estate mogul named Mickey Wolfman (Eric Roberts).

Mickey’s wife (Serena Scott Thomas) and her lover, are working on what Shasta calls “a creepy little scheme” to have her rich husband committed to a mental institution so that they can make off with his fortune.

From there, Phoenix’s Doc gets hired by The Wire’s Michael Kenneth Williams as a member of the “Black Guerilla Family” gang to find a white supremacist, named Glenn Charlock (Christopher Allen Nelson), who happens to be one of Mickey’s bodyguards.

After following a lead that ends up with our extremely high hero getting knocked unconscious at a Massage parlor named Chick Planet, Doc is questioned by his long-time cop nemesis, Christian “Bigfoot” Bjornsen (Josh Brolin, going big and succeeding), a thick-necked, flat-topped, hippie-hating hardass member of the LAPD.

From there, Doc visits with his special lady friend, Deputy D.A. Penny Kimball, played by Phoenix’s WALK THE LINE co-star Reese Witherspoon, gets interrogated by FBI agents (Parenthood’s Sam Jaeger and Veep’s Timothy Simons), and, most amusingly, does cocaine with Martin Short as an coked-up dentist. Doc’s trail keeps leading to some sinister entity called “Golden Fang,” which is either a mysterious ship for running drugs, an Indo-Chinese heroin cartel, and/or a syndicate of dentists. I’m still not sure which.

Making her film debut, indie singer/songwriter Joanna Newsom serve as the film’s onscreen narrator Sortilège, a minor character in the book but here the custodian to descriptions of Doc’s inner thoughts, somewhat surreally I might add.

Which means that one minute, Doc is driving with Sortilège riding shotgun telling us about “the long, sad history of LA land use,” and the next minute she’s gone. The freshness of Newsom's delivery of Pynchon's prose enhances the dry sections of the film considerably.

The fading of the sunny idealistic ‘60s into the scary, smacked out ‘70s is conveyed strikingly through Robert Elswit’s always stunning cinematography (Elswit has shot 6 of Anderson’s 7 movies), which gives both dark, dank interiors and sun-bleached exteriors a great burnt-out look, and the score by Radiohead’s Johnny Greenwood mixed with well chosen songs by Neil Young, Can, Lex Baxter, and the Chuck Jackson Motown classic “Any Day Now,” perfectly evokes the era as well.

Unfortunately INHERENT VICE is no masterpiece. It’s frustratingly low energy at times with scenes that linger on and on. Many critics are calling it “incoherent vice” (there’s a joke I bet will be made at the Oscars) for understandable reasons, but while I sometimes stared at the screen and thought that it was a meandering mess, I was more often struck by the brilliance of many of its moments.

I’ve seen it twice now, and I enjoyed and “got it” a lot more the second time. Phoenix's performance, which initially bothered me as being half-assed, seemed more nuanced (I could see that he was really using his full ass), and I felt more of a poetry to its slow pace than before.

Being the first ever adaptation of a Pynchon novel – books that many have said are unfilmable - is no small feat, and I can’t imagine anybody doing a better job with this particular material than Anderson.

Folks who aren’t Anderson or Pynchon fans going in aren’t likely to be won over, especially at its long-ass length of 2 and a half hours, but those who are hip to its vibe and can get into a groove with its stoned tone are likely to think it’s a gas, man. Sorry, to lay that outdated lingo on you, but I bet deep down you dig it.

Gotta say, I really hated this movie. I wanted to like it, but it was awful.