Opening today at an indie art house near you: 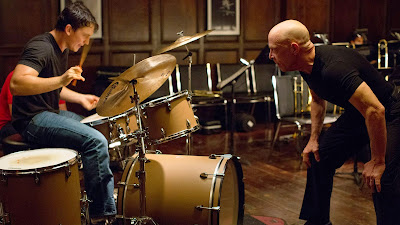 Miles Teller, who I initially disliked as a douche in the asinine 21 & OVER but thought he redeemed himself as a drunk in THE SPECTACULAR NOW, puts in a sharply superb performance as a determined student drummer squaring off against his hard-ass teacher/conductor played by J.K. Simmons, also in one of his finest performances.

Taking place mostly in a dark rehearsal room at the fictional Schaffer Conservatory of Music in Manhattan, the film follows Teller’s Andrew Neyman as he wins a spot in the prestigious school’s band, and undergoes tons of verbal, and some physical, abuse by Simmons’ cruel conductor character Terrence Fletcher.

Simmons’ Fletcher is a brutal bully who believes in pushing his students beyond their limits to achieve greatness. “There are no two words in the English language more harmful than ‘good job,’ he tells Teller.

Teller’s Andrew, who worships at the altar of drumming legend Buddy Rich as we can see from the books, CDs, and posters on his walls, is so driven to be one of the greats that he takes Simmons’ trash talk, but he is quickly approaching his breaking point.

On the side, Teller dates Melissa Benoist, who he had a genuine meet cute with at a movie theater he and his father (a nicely understated Paul Reiser) frequent, but their courtship doesn’t last long as he feels he needs to completely focus on his craft.

In the film’s most compelling sequence, Teller struggles to get to a concert on time after his bus breaks down, he leaves his drum sticks at a car rental agency, and he gets into a major automobile accident on the way back from retrieving them. He makes it there, albeit covered in blood with a broken hand, but blows it by dropping one of his sticks. It’s a grippingly stressful and electrifyingly edited third act starter that sets us up perfectly for the film’s musical showdown climax.

The movie is impressive on all fronts. Both Teller, who it should be noted does all his own drumming, and Simmons deserve awards season action – but in my book (or on my blog) it’s Simmons, who’s a better villain here than the over-the-top ones in most Marvel movies, that should get at least an Oscar nomination for his stunning work here.

The film itself, the feature length debut of writer/director Damien Chazelle, is impressive for its tight narrative construction, especially as it was shot in 19 days on the low budget of $3 million.

Sure to make my top 10 movies of 2014, the beautifully abrasive WHIPLASH takes its name from jazz composer Hank Levy's 1972 standard that Teller nails in his audition, and it features a bunch of blustery big band compositions that keeps the film bumping from beat to beat. It never rushes or drags, to use the parlance of Simmons (“Were you rushing or were you dragging?”), and there’s not one wasted moment that I can recall.

WHIPLASH may leave you feeling as bruised, and bloody as Teller, but you won’t feel beat down by it. It’s ultimately an inspirational tale that if you haven’t had to overcome the tyranny of a control freak asshole you can still relate to, but if you have, man, it will hit you hard.

wow...It got a 96% on Rotten Tomatoes even. The list of movies I need to see is huge but I might try to catch this really soon.
I reviewed Laggies on my blog if you're interested!