Tom Hanks Holds His Own Against Somali Pirates In CAPTAIN PHILLIPS 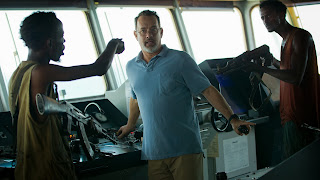 Tom Hanks’ most vital and powerful film since CAST AWAY dramatizes to great effect the hijacking of the cargo ship MV Maersk Alabama, which made headlines in 2009.
Working from a screenplay by Billy Ray (based on the book “A Captain's Duty: Somali Pirates, Navy SEALS, and Dangerous Days at Sea” by the real Captain Phillips and Stephan Talty), Paul Greengrass applies his action thriller skills, honed on other films based on real-life events (BLOODY SUNDAY, UNITED 93) and BOURNE sequels, to the tension-filled material set almost exclusively on the high seas.

I say “almost” because we get a bit of set-up on land with Catherine Keener, as Hank’s wife, driving her husband in their minivan to the airport. We get a little insight into their home-life as they discuss their son’s future with Hanks worrying aloud that “the world is moving fast. It’s not going to be easy for our children.”

Then Hanks is off to sea on a shipping route along the Somali coast, where his worries change considerably as he’s well aware of how dangerous these waters are. Hanks puts his crew through anti-hijacking practice drills to ensure safety measures, but before long they are face to face with the real thing: four armed Somali pirates.

The pirates, led by Barkhad Abdi in an impressive performance for a first-time actor, were able to board by way of hooking a long ladder to the side of the ship, while Hanks has his men hide in the bowels of the engine room. The Captain offers the pirates the $30,000 they have in the ship’s safe, but it’s not enough to satisfy Abdi, who knows that there will be fatal repercussions if he doesn’t return home with much more than that.

The tension mounts when the Navy shows up, with the macho Max Martini as a SEAL negotiator, but unfortunately this marks where the movie begins to feel a bit routine. The film is perhaps 20 minutes too long, drawn out too heavily by a sequence in which snipers target the pirates as they try to make their escape. The sequence drags because we know exactly what’s going to happen and it takes too long to get there.

But despite the electricity of the pacing fading in its last third, CAPTAIN PHILLIPS, like Alfonso Cuarón’s GRAVITY, is a sure sign that the Oscar-baiting fall movie season has begun. Greengrass’s shaky-cam shot documentary-style production isn’t as good as the visually stunning and awe-inspiring GRAVITY, but it’s a work of genuine quality with Hanks at the top of his game.

It’s obvious why the part of Captain Richard Phillips appealed to the two-time Best Actor Oscar winner – he’s a by-the-book hard working family man, not unlike Hanks himself. After the over the top stunt casting of Hanks as six different characters in Lana Wachowski, Tom Tykwer and Andy Wachowski’s CLOUD ATLAS last year, it’s a simply a treat to see him as a normal guy, holding his own in abnormal circumstances. Do I smell a third Oscar?