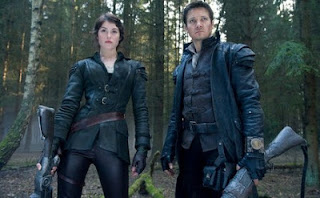 Warning: This review may contain Spoilers!

From the same lack of inspiration that brought you ABRAHAM LINCOLN: VAMPIRE HUNTER comes this muddled mixture of the action genre with fairy tale mythology that, of course, is available as an IMAX 3D experience. I so wish I had the option of seeing a 2D advance screening, but I had to don the glasses and endure imagery that was way too dark, dingy, with tons of disorienting pans.

The story and the characters are just as dismal. Jeremy Renner and Gemma Arterton (best known for QUANTUM OF SOLACE and TAMARA DREW so she’s not very well known) are the title characters who we first meet as children (Cedric Eich and Alea Sophia Boudodimos respectively) going through the motions of the original Brothers Grimm tale.

After that cold opening, a cardboard-looking animated title sequence filled with fiery in-your-face CGI brings us up to speed that Hansel and his sister Gretel grow up to take on witch hunting full-time, with newspaper headlines praising their work along the way.

With anachronistic American accents, Renner and Arterton show up in a small German village to save a young woman (Pihla Viitala) suspected of being a witch from being burnt to death. Anyone who’s seen MONTY PYTHON AND THE HOLY GRAIL will know how villagers in Medieval times react to possible witches, and these folks are especially riled up as they are goaded on by the evil Sherriff Berringer (Peter Stormare – no stranger to this setting as he was in Terry Gilliam’s THE BROTHERS GRIMM).

Arterton head butts Stormare, Viitala is freed, and the brother-sister duo start to investigate the abduction of several children from the town by witches. This plot serves just as a clothesline to hang together a bunch of annoyingly quick cut fight scenes that look terrible and fail to deliver any excitement.

Famke Janssen plays the real villain of a sorceress who can morph her face from a normal human look to a bad witch make-up job (go from zero to witch in 10 seconds?) since Stormare gets his head stomped on by what turns out to be a friendly troll in one of the film’s many gratuitous gore shots.

Of all the failed factors that make up this movie – the awful screenplay, the tedious tone, the overwrought score by Atli Örvarsson (IRON MAN), the unconvincing acting, the poorly plotted procedural, the clunky humor, and the addition of heavy artillery for the machine gun fire ‘em up finale – the only commendable factor present is that it’s only 88 minutes long.

Good review Daniel. It's exactly what the movies were made for: features that are okay when you watch them, but don't last in your brain very long. It's not terrible, just not something worth remembering either.