THE MASTER: A Complicated Yet Beautiful Dream I’m Still Processing 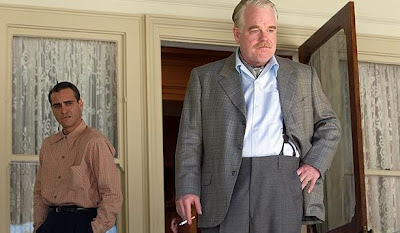 The impact of the amazing imagery in Paul Thomas Anderson’s follow-up to 2007’s THERE WILL BE BLOOD is immediate. Opening shots of the frothy ocean from above are vividly captured by the camera of cinematographer Mihai Malaimare Jr., as is the following sequence of American soldiers on a tropical beach at the end of World War II. However, the impact of the narrative, as it shapes, isn’t as immediate, for this is a film that viewers will still be processing way after it ends.

Phoenix bolts out of there, at first chased by other pickers, and stows away on a ritzy riverboat where he meets Philip Seymour Hoffman, as the charismatic leader of a new religious movement called “The Cause.” Oh, yeah, in case you haven’t heard – this is the movie that’s supposedly based on Scientology, and Hoffman is allegedly based on writer/Church of Scientology founder L. Ron Hubbard.

It’s impossible not to think about that when Phoenix undergoes intense questioning by Hoffman, i.e. auditing, and when vague yet lofty theological platitudes are tossed around. Hoffman sees through Phoenix, but still takes him on as a protégé. Hoffman’s family, including wife Amy Adams, daughter Ambyr Childers, and son-in-law Rami Malek are skeptical of Phoenix, although it’s obvious Childers has a thing for him, but Hoffman apparently sees something in him that reminds him of his younger self, or, maybe, he just wants him around to make more of that powerful moonshine.

Despite that Phoenix pines for a girl he left behind when he went to war, played by Madisen Beaty in a scene that I’m not sure if is imagined or not, he appears to want to screw every woman in sight. In a party scene hosted at the house of a benefactor played by Laura Dern, Phoenix envisions every woman in the nude as Hoffman sings a bawdy song. Except for the men who all remained clothed, his imagination doesn’t discriminate age-wise, and even a pregnant seated Amy Adams (who looks very uncomfortable) is naked.

Phoenix doesn’t seem to pay attention to the philosophies of the cult around him, and Anderson’s screenplay really doesn’t either. When Hoffman’s son, played by Jesse Plemmons (amusingly recently referred to as Meth Damon on a A.V. Club message board because of his role on Breakin’ Bad and resemblance to Matt Damon), asks Phoenix “Don’t you know he’s making it all up as he goes along?” it doesn’t really register.

Figuring out what’s supposed to register in THE MASTER will be quite a sport this season. Many will be turned off by the coldness of the production, but no doubt will endlessly discuss it.
The film’s wide scope, which was shot in 70 mm, can be overwhelming, even when it’s only focusing on a few faces in the frame. Or just one – mostly Phoenix’s gritty mug, but the red sweaty pores of Hoffman’s cheeks get exhaustingly explored as well.

Phoenix nails the adrift emptiness of a man who just wants to go with the flow, as long as booze and loose woman are part of that flow. Hoffman’s religion may be bullshit to him, but it’s still something to grasp onto, or at least the trappings around it.

I got lost in the engulfing experience that was “The Master,” and believe it’s one of the year’s best films. Each of Anderson’s films has an angle on the American right to the pursuit of happiness, whether it be gained through drilling oil (THERE WILL BE BLOOD), the business of pornography (BOOGIE NIGHTS), crime (HARD EIGHT), romance (PUNCH DRUNK LOVE), or pure chance (MAGNOLIA).

Here, Anderson’s angle is much more difficult to pinpoint, but because of the incredible luscious look of the film, the meticulous acting (both Hoffman and Phoenix’s sharp performances will surely garner award season attention), the precision of the writing, and the excellently fierce and sometimes frightening score by Jonny Greenwood, maybe that doesn’t matter.

The only thing I can really pinpoint is THE MASTER felt like a complicated yet beautiful dream. You just have to wait ‘til later to ask me what it means though, I’m still processing it.