Opening today in Raleigh and the Triangle area: 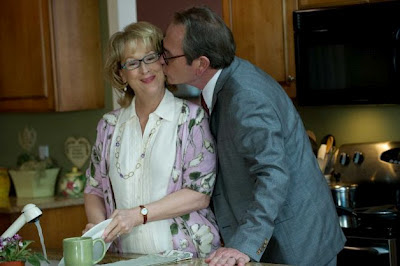 A frumpy Meryl Streep and a grumpy Tommy Lee Jones, as a long-timed married couple whose marriage has lost its spark, are both excellent in this film that really shouldn’t be mistaken for a oldster rom com.

At first, it can seem simple-minded, both drama and comedy-wise, to see Streep failing to get any action from her coldly set-in-his-ways husband Jones, who sleeps in a separate room, completely oblivious to his wife’s advances.

However, more and more, as it follows Streep through the motions of her passion-less existence, Vanessa Taylor’s screenplay has a good brain on its shoulders about these being real relatable people, and not caricatures armed with one-liners.

So to save their marriage, Streep signs her and Jones up for a week of couples’ therapy with a famous sex therapist (Steve Carrell) in the town of the title in Maine. Jones is resistant to leave their home in Omaha, but catches up with Streep at the last minute on the plane. “I hope you’re happy now” he says, and, like in a few other instances in the film, I swear Streep gives the camera a knowing look.

Because, you know, it’s Steve Carrell, I kept thinking he was going to steer the movie into different comic territory, but he plays the role completely straight. Carrell’s soft-spoken character is vague with no back story, yet figures in nicely with the very spare cast.

Elizabeth Shue has what amounts to a cameo as a bartender that chats up Streep when the couple spends a day apart, in a scene that tells us ‘hey, everybody has the same problems.’ For Streep’s benefit Shue asks for a show of her patrons’ hands: “Who in here is not having sex?” Of course, everybody’s hands go up.

Yes, bits like that make this come off like a big screen sitcom at times, and the film does get goofy with too much oral sex humor (there’s a movie theater scene that should’ve been deleted), but the writing is truthful about aging relationships, and there’s a undeniable warmth throughout.

Enough to make one ignore the safe choices on the soundtrack (Annie Lennox, Van Morrison, Lenny Kravitz, Al Green, etc.), and the Nancy Meyers-ish trappings, and take in a couple of ace actors in a small simple story about a couple of 60-year olds rekindling their romance.

If that doesn’t appeal to you, there’s plenty of CGI-ed spectacle with cartoon characters out there this summer that probably will.