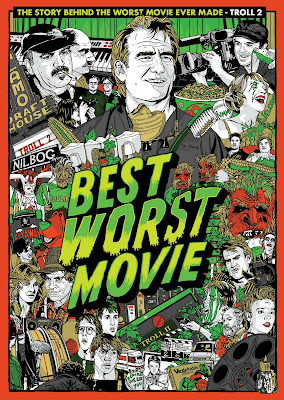 He's a dentist in Alexander City, Alabama who is much loved by the local community.

Hardy seems a normal nice guy except for one crucial piece of information: in 1990 he starred in a notoriously awful movie titled TROLL 2.

TROLL 2 was a direct to video schlock horror flick that had no connection to TROLL (1986). The movie has inexplicably gained an audience over the years while maintaining its 0% rating on the Rotten Tomatometer.

Why? Well file this under case file: "it's so bad that it's good."

TROLL 2 is about a family taking a vacation in a small town named Nilbog (goblin spelled backwords) who are taunted and tortured by vegetarian goblins (not trolls, mind you).

As its reputation tells us, it contains some of the worst effects, the worst acting, worst writing, and worst direction of any film in history.

For the record though, I must say that I agree with Horror Movie Journalist M.J. Simpson who appears in this doc that there are far worse movies - but that's a whole other blog post.

This documentary, made by Michael Stephenson who was the child actor in TROLL 2, explores the minor fan phenomenon surrounding the supposed "Citizen Kane" of suck.

Ironic or not, the love for TROLL 2 is hilariously contagious as Hardy and the rest of the cast are treated like rock stars at these screenings, but the film goes from funny to fascinating to sad fairly swiftly.

Stephensen travels to Italy to interview director Claudio Fragasso (credited as Drake Floyd in TROLL 2) and his wife Rossella Drudi (who wrote the screenplay for TROLL 2 also credited to Drake Floyd). Fragasso talks pretentiously about the film:

"It's an important film which talks about the family, the union of the family resisting all of those things that want to destroy it and see it dead."

Fragasso only has this response: "You don't understand nothing."

After amusing scenes of cast members re-enacting scenes from TROLL 2, the doc starts to get sad as Hardy who's gung ho about enjoying his semi-celebrity status, visits a memorabilia convention in Britain manning a TROLL 2 table that hardly anybody visited.

Some cults only extend so far it seems.

Special Features: a slew of deleted scenes and extra interviews equaling over an hour of bonus BEST WORST MOVIE goodness.

If you want to see what the fuss is about - TROLL 2 is currently available on Hulu.com and streaming on Netflix Instant as it's celebrating its 20th anniversary.