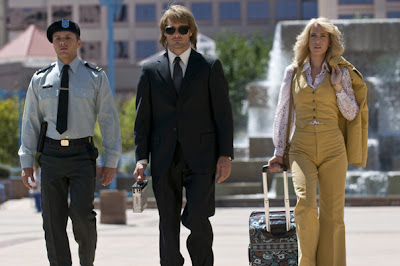 MacGruber! Making a movie out of a flimsy SNL sketch!

MacGruber! Which will most likely be clobbered by SHREK FOREVER AFTER's opening weekend grosses!

The first film derived from a Saturday Night Live sketch in a decade (the last being 2000's THE LADIES MAN) accomplishes something surprising - it's much better than the sketches on which it's based.

With a few exceptions, like when Betty White famously appeared as MacGruber's grandmother earlier this month, I've found the sketches to be irritatingly repetitive. They always concern a countdown in a control room in which Will Forte's MacGyver take off fails to halt a bomb's detonation because of whatever neurosis of the week he's dealing with.

Of course, you can't make an entire movie out of repeatedly blowing up the hero so borrowing heavily from the 80's action movie handbook we get a something resembling a plot. Which is - the ridiculously over decorated special operative MacGruber is called out of retirement because his arch nemesis, named...wait for it...Dieter Von Cunth (Val Kilmer), has stolen a nuclear warhead and threatens to, in his words, "turn Washington D.C. into a pile of ash."

Brought back into action by the always welcome Powers Boothe as Col. James Faith, the mulleted MacGruber assembles a team of beefed up "American heroes with over 100 years of combined combat experience." The early fate of this team is one of the better jokes in the film so I'll just say MacGruber has to make do with Lt. Dixon Piper (Ryan Phillippe) as his second in command, and Forte's fellow SNL-er Kristen Wiig as Vicki St. Elmo who is just as stuck in the '80s hairstyle and fashion-wise as our uber-unlikely hero.

There's a back story involving Kilmer's killing of MacGruber's fiancee (Maya Rudolph) 10 years previous which ups the stakes - MacGruber threatens Kilmer with his signature "throat rip" among other, uh, unsavory things. Apart from that it's what you'd expect, not that that's a bad thing, from an over the top action comedy directed and co-written by one of the minds behind SNL digital shorts like "Lazy Sunday." It's a hard R with more F-bombs than actual bombs, scads of crude juvenile humor, and the most hilarious sex scene since TEAM AMERICA.

By no means a comic masterpiece since it's a little too sloppy and choppy to qualify; MACGRUBER is funnier than it has a right to be.

Forte's fearless gusto - which means he'll even go nude for a laugh - and his mock egotistical line readings make for a performance that's maybe not a tour de force, but certainly a minor comedic triumph.

As his meek but eager love interest, Wiig registers much more favorably than in her recent blank slate roles such as EXTRACT, WHIP IT, and DATE NIGHT. This is sort of odd due to the purposely shallow nature of Wiig's character, yet she has some of the funniest bits in the film. Kilmer comes off beautifully as the oily bad guy in Euro trash threads sporting a slimy smirk. It's the kind of role he's perfect for as it tweaks his former 80's it boy status and gives him big artillery backdrops to chew on.

Phillippe, apart from some celery silliness which I won't spoil, plays his role straight as if he's in an actual action movie and that's the right idea.

True satire movie-wise is hard to come by these days so don't really expect any of it in MACGRUBER. It has spoofery in its genes, but it's more content to exist in the margins of immature buffoonery.

For folks looking for a mindless summertime diversion with more than its share of decent jokes, it should do just fine.

I'm excited for this one. I can't believe it's been a decade since they've deemed an SNL skit worthy of its own movie!

We found your discussion on "MacGruber" very compelling and you may find that you already have a card that allows you to receive 20% off every $25 in movie tickets at Fandango.com up to four times per month. If you have a Visa Card that simply says 'Visa Signature' across it, you could be one of the millions of Visa Signature cardholders and would receive this special offer when you use your Visa Signature card at Fandango.com. There are no restrictions on who can redeem the tickets, so it's also a great gift idea for the movie lover in your life. We really hope you can take advantage of Signature's premier benefits, namely all of the discounts to the must-see movies you are already purchasing tickets for.

Learn more about this and additional Visa Signature offers at: http://usa.visa.com/personal/visa-signature/index.jsp

See you at the cinema!
Vivian
Visa Outreach Team

P.S. For additional Visa Signature offers, be sure to visit us on Facebook: http://www.facebook.com/visasignature